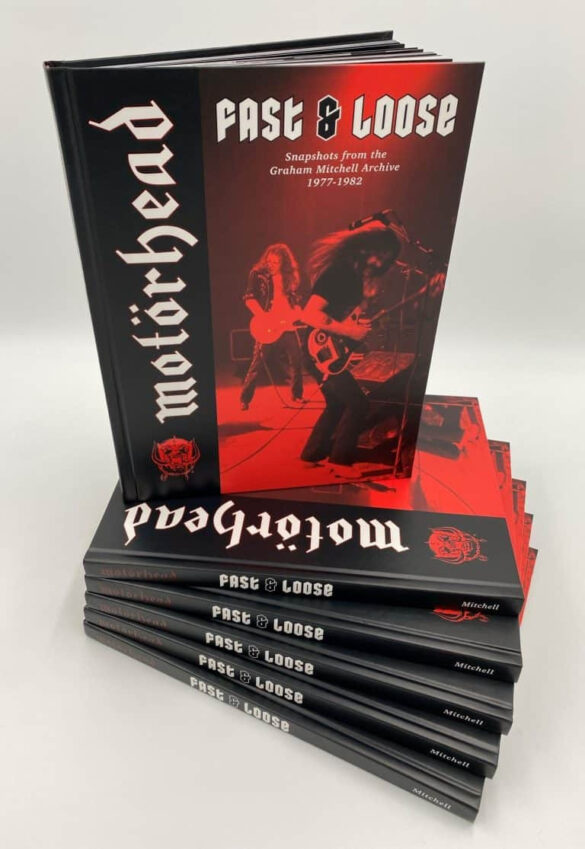 Like cockroaches, Motorhead will never die.  Despite the passing of Lemmy there is still an influx of new Motorhead related products.  This hard cover, coffee-table book is just one of them.

The world of music publications, licensing, intellectual property rights, copyright and ownership is a tangled web.  What immediately caught my eye is that this book is published by BMG (Bertelsmann Music Group) the media giant.  They are not your traditional publisher.   It got me thinking, where do the profits of this book go?   Motorhead had about 10 members over the years.  Five of them are dead.  Since the death of Lemmy the band broke-up obviously but the Motorhead estate / company / family are still putting out product.  I for one am grateful.

MOTORHEAD:FAST & LOOSE is a very nicely presented collection of photographs of the band.  The sub-title is ‘Snapshots From The Graham Mitchell Archive 1977-1982.’  According to the intro, penned by Mitchell himself, he was a jack-of-all-trades in the earlier days of the band.  Bouncer, groupie-wrangler, procurer of party favours, manager friend and more, Mitchell was never far from his camera.   He fully admits he is not a professional, most of the images presented herein were snapped on the fly, one-shot, no flash…fast and loose as it were.

Graham has the privilege of hanging out with the band in the classic years, the classic line-up, ‘The Bronze Years’ however you want to classify it. To this day I still meet older fans who think this was the only true era/line-up of Motorhead. I am a big fan of the Lemmy/Phil/Mickey era  (twelve albums from 1993-2015) but I do recognize the merit of the line of thinking that those first six albums from 1977-1982 are undefeatable.

Mitchell employs a ‘fly on the wall’ technique, intentional or not, hence the term ‘snap-shots’ in the sub-title. Spontaneous, fun.  Framing and focus be damned!   This 156-page collection of photos are printed in colour (mostly) on big glossy pages.  There is minimal text, Mitchel preferring to let the images speak for themselves but he does add an occasional note.  While impossibly fun the early days were not glamorous!  Tired, sweaty, cramped in a van, washing in the sink,  all the hallmarks of carefree, hard-working musicians are captured here for our enjoyment and posterity.

FAST & LOOSE is a wonderful look into the heart of the beast that was Motorhead on the road.  Regardless of who made this book or who gets the money, at the end of another perfect day, the motorbangers will want this in their library.