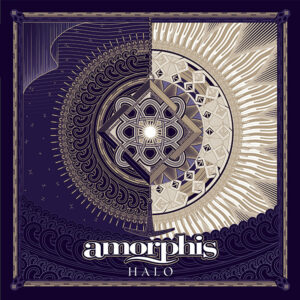 AMORPHIS is an institution. Each time they announce a new album, the anticipation rises due to the mere fact that they have been on a roll since the introduction of Tomi Joutsen as their vocalist in 2006. Each album built upon the last with their last two albums being among the best of their career. So with the announcement of a new AMORPHIS album and the release of a single my anticipation was left to it’s own devices. The task of following up their past couple of albums would seem daunting to me and something almost impossible to do. Well never fear, because Halo not only picks up where the band left off with Queen of Time but they seemed to be able to add another layer to create another masterpiece that only AMORPHIS can create.

I think the formula that was created on Under The Red Cloud and continued on Queen of Time is quite present here. Their way of using the first three tracks on the album to set the mood for the rest of album is on display here again. The opener is called “Northwards” and it your typical AMORPHIS opener, very powerful and helps prepare you for the rest of the album. That is followed up by the two singles released, “The Moon” and “On the Dark Waters.” Both are as powerful if not as powerful as the opener, with the latter being absolutely incredible, and it shows that some formulas are worth keeping and repeating. But it’s not until we dig down and examine the rest of the songs do we really begin to see how this album has the potential to not only rise to the level of its predecessors but even surpass it.

As we get into the meat and bones of this albums we begin to see how, as much as they are keeping most of the formula of their last two they are also expanding on that sound. Songs like “Windmane”; a song that actually had to grow on me before I could see the genius in it. The song begins with some very processive moments where the time signature seemed chaotic at first but with repeated listens the whole scope of what they were going for became obvious. The odd time signatures distracted me from what else was going on, like the folk elements and the power chorus and melodies that Joutsen is capable of. His use of harsh and clean vocals is among the best in the business now. The way he pushes himself on songs like “On The Dark Waters” or the monstrous “Seven Roads Come Together” and the melodies he uses are absolutely infectious. Speaking of the latter, this track will go down as one of their best ever. This song is huge with incredible songwriting and brilliant execution. The use of the keys, orchestrations and the choirs is goose bump material. But they don’t stop there. What they do is follow up a huge song with an even more powerful and epic song, “War.”

Of course it’s way too soon to start having ANY conversations about Album of the Year/Best of 2022 yet….way too soon. But let me make a prediction that Halo will be in most people’s best of lists at the end of this year. To be this good and making albums this important 32 years and fourteen full lengths into their career shows that AMORPHIS is a force in metal that is not going anywhere anytime soon.