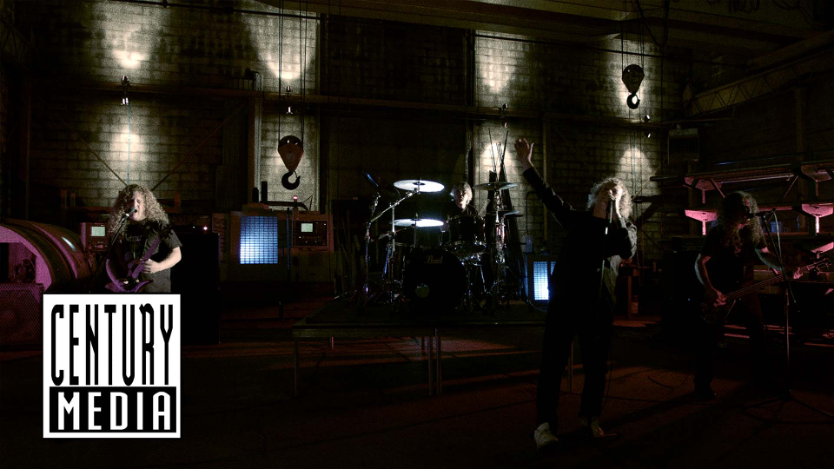 VOIVOD drummer Michel “Away” Langevin comments about the song stating, “After coming back from the European tour with GWAR at the end of 2019, we took a break and got back together in early 2020 to record some new ideas and improvisations. After finishing one of these sessions, while untying my running shoes, I had a flash of a rhythm where I would skip one beat every bar. I told the band I had an idea and walked towards the drums but I stepped on one of my shoelaces, missed a step and almost fell on the drum kit.

Everybody laughed, then I played the beat, which Chewy recorded and named ‘Away’s Shoelace Incident’. This gave Snake the idea to write about these strange timings where somebody would stop to tie up his shoe only to be closely missed by a flying wheel of a car. At one point Snake had shorten the title to ‘Shoelace’ but I noticed in his lyrics the words Synchro Anarchy and told him it would be a great name for the song.
When we were done recording the songs we all thought it would also be a good title for the album. It is really representative of the planet we live on and the way we had to build the LP out of snippets of ideas like a huge puzzle.

For this single, we asked our good friend Syl Disjonk, who did the videos for ‘The End Of Dormancy’ and ‘Kluskap ‘O Kom’, to film the band and work his magic. So here it is, the title track of the new album, enjoy!”

Synchro Anarchy was recorded and mixed by Francis Perron at RadicArt Studio / radicart.net/ in Québec, Canada and mastered by Maor Appelbaum at Maor Appelbaum Mastering / www.maorappelbaum.com/ in California, U.S. and produced by VOIVOD. The album features cover artwork by VOIVOD’s Michel “Away” Langevin and includes the following track-listing: 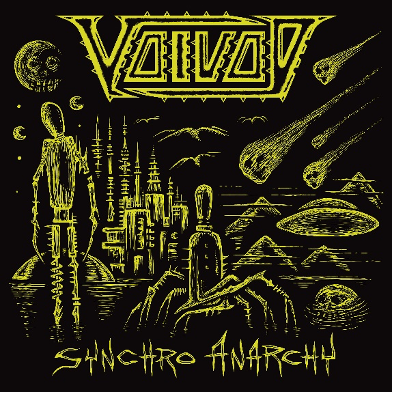 Next to the Jewelcase CD, LP and Digital Album formats, Synchro Anarchy will also be available in a Deluxe edition as Ltd. 2CD Mediabook and as Digital Album (2CD), containing the special Return To Morgöth – Live 2018 bonus disc, which features a full live-show recording of VOIVOD’s 35th Anniversary hometown appearance at the Festival Jonquière En Musique from June 29th, 2018. The show was recorded and mixed by Francis Perron, mastered by Yannick St-Amand and features the following track-listing:

The LP format of Synchro Anarchy is available to pre-order HERE, and will come on 180g vinyl with an A2 poster and will be available in the following variants/limitations.

Closing in on 40 eventful years of existence, VOIVOD are returning with their 15th studio album, reaffirming they are one of the most fervently creative bands in the universe. Synchro Anarchy follows 2018’s highly praised and Juno Award winning The Wake album, as well as 2020’s stellar Lost Machine – Live release.

Michel “Away” Langevin adds, “We are eager to present our latest work, a real collaborative effort. The new album represents countless hours of writing, demoing, recording, mixing and so on. The band and Francis Perron at RadicArt Studio gave their very best to make it happen under unusual circumstances, which led us to call it “Synchro Anarchy”. We feel that the sound and music are 100% Voïvod, and we hope everyone will enjoy it as much as we had fun making it. We certainly can’t wait to play it live!”