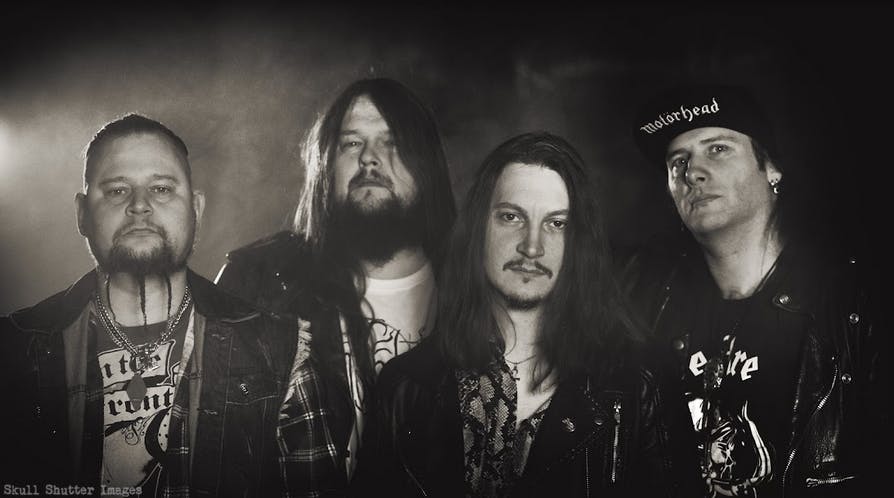 Finnish sleazy rockers Serpico are unveiling the power ballad “Dark Energy”, which will be featured on their forthcoming album “The Chosen Four” due out summer 2022 via Rockshots Records. The album is produced by platinum-selling Finnish record producer Anssi Kippo (Children of Bodom, Hanna Pakarinen, Teräsbetoni) who had this to add about the track.

“From the very first demo version, this song stood out by having something magical! Usually, with a song like this, you’d stack a huge wall of guitars, record dozens of backing vocals and at least as many keyboards. On Dark Energy, we took a completely opposite approach and ended up having a wall of just two rhythm guitars, only one keyboard and a single vocal track. With a song of this magnitude, any additional tracks would simply have decreased its magic.”

The music video for “Dark Energy” was directed by Ville Juurikkala and brings the band into a whole new light. Enthusiasm for Serpico‘s music paved the way for the collaboration with Juurikkala who is best known for his works with Slash, Steven Tyler, HIM, Michael Monroe, 69Eyes, Apocalyptica, Nightwish and many more.

“Serpico has some great authentic and rough rock’n’roll both as human beings and in music. I couldn’t pass up on the opportunity to work with them!” adds Juurikkala.

“Dark Energy” can be watched and hard at the following links:

Since Serpico‘s inception in 2005, they have released two full-lengths “Rose Tattoo” (2018), ‘Shallow Mistress” (2014), and an EP “Bad Commercial” (2011) along with touring all over Finland, Sweden, Estonia, Latvia, and England. The band is genuine and unique Rock n’ Roll with big respect for the classic titans.