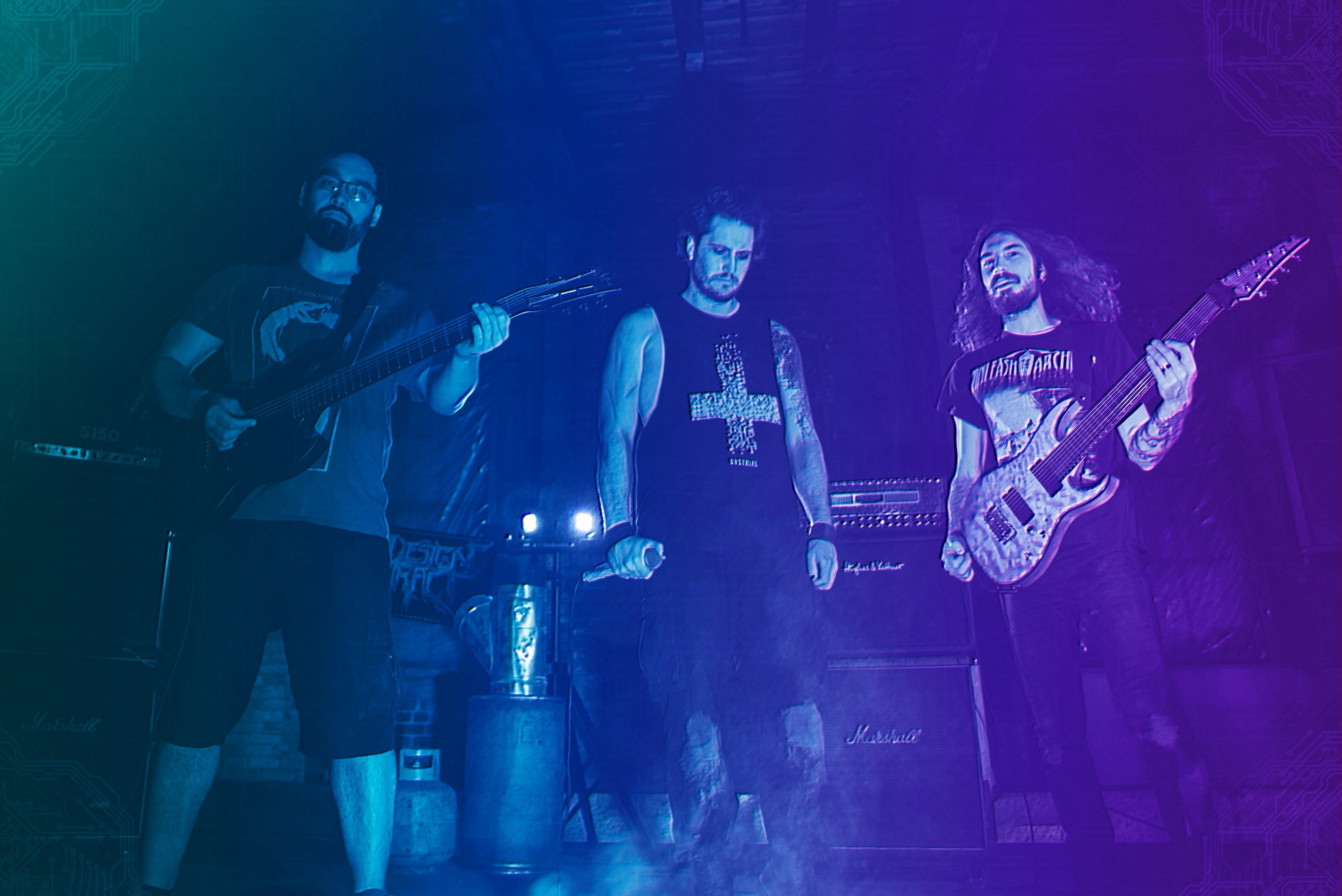 Many bands around the world have had difficulty gathering for a simple jam together, and when they do, it’s an epic reunion. Canada’s The Design Abstract captured this moment when they all were finally able to gather in a rehearsal room and have their first practice with their latest line up consisting of newest addition Logan Mayhem (Guitar, Synth) to join Matt Ngo (Guitar) and Voiicide (Vocals, Bass, Synth).

Today, the trio is sharing video of them performing “The Hybrid Awakening”.

“Track 3 off “Metemtechnosis” is what really sets the benchmark for the album: The same impressive riffs and leads as well as guitar and synth solos that you should expect, but with the emotionally impactful climax of the chorus, and the Meshuggah-esque breakdown sections. Lyrically, this track explains this new race of humanity is integrated with technology at a fundamental level, making humankind stronger, faster, and more versatile than ever.” adds the band.

The Design Abstract melds together narrative sci-fi with Gothenburg-esque melodic death metal, resulting in ambiguous concept albums that sound completely different from other artists in the genre. Their latest album “Metemtechnosis” continues the “Technotheism” (2021) storyline after an indeterminate amount of time in the universe. The band compares this new album to the last, and lets us know what’s coming next:

“Many people had many positive things to say about “Technotheism” upon its release, and we feel that “Metemtechnosis” is a worthy successor to it. Compositionally, we have refined many elements and parts of the processes, and from a technical standpoint, we have really stepped up a lot. Those who wanted to hear more of the killer guitar work will assuredly not be disappointed. “Metemtechnosis” also carries on the story of “Technotheism” in part two of what will be a trilogy. Everything that was present in “Technotheism” has been brought back in more compelling ways, and the performances are more on-point than ever before.”

Similar to “Technotheism”, the tracks were written as necessary to touch on the major story beats of the album; an overarching science-fiction story about a far future where technological advancement puts into question a lot of things taken for granted, like the definition of humanity, individuality, progress, and the line between all of these things. After the third album in the trilogy is released, The Design Abstract will move to a different fictional setting, but the music will continue to experiment with the elements they use in new and innovative ways.

All songs on “Metemtechnosis” were written and performed by Voiicide (vocals/bass/programming), Logan Mayhem (guitars/modular synthesis), and Matt Ngo (guitars). It was produced, mixed, and mastered by Voiicide at Abstrakted Records and the album artwork was done by Yuta Shimpo.

The Design Abstract has a sound that is distinctively theirs and is recommended for fans of Soilwork, Septicflesh, and Divine Disorder.

“Metemtechnosis” was released on October 29th, 2021 via Abstrakted Records and available on Design.bandcamp.com, Spotify, Apple Music.

About:
The Design Abstract is a 3-piece Symphonic Melodic Death Metal band from Kitchener-Waterloo, ON, Canada. The band focuses heavily on storytelling and worldbuilding with a futuristic and sci-fi narrative to each album they create. The Design Abstract formed in 2011 as a solo project under the name Design, and after many lineup changes, grew into a musical entity that presents a bold, epic, and even monolithic fusion of orchestra, synth, and melodic death metal. Sweeping symphonic passages, harsh industrial elements, highly proficient and memorable guitar work, and brutal guttural vocals mixed with soaring cleans are all blended in many ways to put forth a truly unique and powerful musical experience.