A new book that promises to be a definitive look into the New Wave of British Heavy Metal is set for a February release date through Constable. Denim and Leather, written by Guardian/Spectator/The Quietus contributor Michael Hann, promises to tell ‘the definitive story about the greatest days of British heavy rock’.

The publishers say: “In Denim and Leather, these stars tell their own stories – their brilliant, funny tales of hubris and disaster, of ambition and success – and chart how, over a handful of years from the late 1970s to the early 1980s, a group of unlikely looking blokes from the provinces wearing spandex trousers changed heavy music forever.” 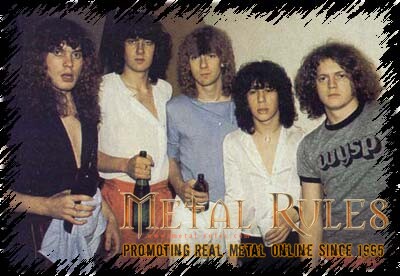 “Denim and Leather captures a moment in time and a genre of music that had a brief moment in the sun,” says Def Leppard guitarist Phil Collen. “The book is an honest portrayal, directly from the horse’s mouth. The interesting thing is that it was people trying to discover their own identities. The book sums it up by the people who experienced it.”

Advance PR says, “In the late 1970s, aggressive, young bands are forming across Britain. Independent labels are springing up to release their music. But this isn’t the story of punk. Forget punk. Punk was a flash in the pan compared to this. This is the story of the New Wave of British Heavy Metal, a musical movement that changed the world.

For more information and pre-order visit DENIM AND LEATHER.