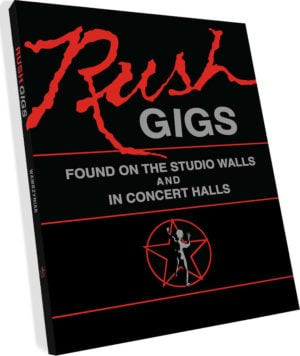 When you are a fairly committed fan of a band, there is a pretty good chance you will eventually cross-paths with other fans.  Such is the case of Ray Wawryzniak. If you are a die-hard Rush fan you may know of him.

If you are not familiar with the name he is infamous among Rush fans.  Of course it’s not a contest and you really really measure these things with any sense of objectivity but Ray may be the world’s biggest Rush fan.  If you are not a dedicated Rush but read metal-Rules.com you may recognize his name and video as the anchor of and inspiration for, our long running series about Uber-fans, called ‘Spectacularly Majestic’  It was Ray who coined the phrase and title of the series.

Now he has cemented his iconic status among Rush fans by publishing his first book called, RUSH GIGS: FOUND ON THE STUDIO WALLS AND CONCERT HALLS.   As a master archivist and librarian he has contributed to Rush books and projects in the past but this is his first full book.

RUSH GIGS is just over 200 pages long.  It comes with a brief Introduction by Ray and then we dive with a headlong flight into the Rush archives.   As the title suggests Ray has collected images of a couple hundred gig posters, ticket stubs, and ads and published them all in this handy collection.

Starting logically at the beginning, we get to see Rush very first gig poster from the first time they ever played in the United States.  More specifically it was a gig in Lansing, Michigan on May 18th, 1974 at a Drive-in theater of all places!

From there we travel through time, gigs to gig,  tour to tour getting a fine cross section of images from the ages.  Some are plain and largely uninspired, just text on the poster serving as a the conduit of information about the upcoming gig, and others are full works of original art.  Many of them are workmanlike but there are many where the promoters spent time and money to make a nicer presentation.

As an added value Ray adds a comment to every gig poster; some history, some trivia, or perhaps making comments in interesting points about the art or the gig itself.  Of course not all the gig posters are  collected here, that would be thousands of them.  What we have is an excellent cross-section from various, albums, tours and nations.  I found it interesting to note that despite a massive international fan-base, the band really did not tour that much outside of North America.  Apparently Rush only went to Japan once which surprised me.  Ray also lets us know which gigs were recorded for concerts.  This is a deep dive, a collectors dry-dream, examining long lost pieces of paper,  where maybe only a few hundred were ever printed and only a few dozen still exist today.

Tragically, I had to review this book as a PDF.   That means the images did not really translate as well, viewing them on a telephone, as compared to a big glossy book.  However I’m sure the final product will be spectacularly majestic as well.

There are a lot of books about Rush on the market, I should know I own and have read most of them.  How essential is this to add to your Rush library? That depends on how much of a fan you are!   Obviously this is not intended as a causal introduction to the band.  It is however an important historical document for the die-hard fans.  This will be a perfect library’s companion to WANDERING THE FACE OF THE EARTH, the official touring history of the band.