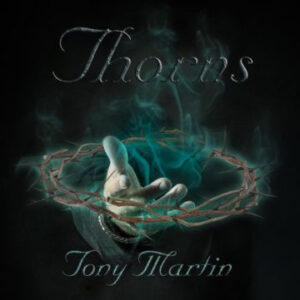 The first Black Sabbath album I owned was WE SOLD OUR SOULS FOR ROCK ‘N’ ROLL. The second was the Tony Martin fronted HEADLESS CROSS. The first time I saw Sabbath on TV was the video for said album’s title track. First Sabbath tour was the Tony Martin fronted CROSS PURPOSES jaunt, in which I had to hustle a ride for the 3 hour trip to Jacksonville as it was their only date in the Sunshine State, and there was no way I wasn’t going to be there for it. Said otherwise, during my formative years, Tony Martin was my guy for Sabbath. His contributions to the Sabbath legacy are woefully underrepresented due to licensing issues with most of his records making them both out of print and unavailable digitally, and the fact that he will forever live in the shadows of both Ozzy and RJD. But those albums are (mostly) outstanding, as is Martin’s vocal style and lyrical prowess.

Which brings us to THORNS, Tony Martin’s first proper solo album in 17 years and his first proper full length in 10 years since the last outing with The Cage. And it is good to have him back with, complete with global distribution this time around. As one might expect, THORNS leans heavily on the kinds of slick, traditional heavy metal sensibilities you’d expect from the guy, but also introduces some welcomed 70’s prog elements and even some folksy storytelling. There are a few clunkers in the mix, but overall THORNS proves itself to be a fantastic kick start to the new year.

Album opener “As the World Burns” is a full throttled, almost thrash metal tune that showcases how strong Martin’s mid-range still is after all these years, while the doomy chug of “Black Widow Angel” shows the man can still hit the highs as well. The synth heavy “Book of Shadows” with its ominous tones and keytar solo is one of my favorite tracks on the album, and acoustic numbers like “Crying Wolf” and “This is Your Damnation” buck the heavy in favor or dark melodies and creative lyrical proselytizing. Sandwiched in between the good and the great on THORNS are a set of tunes that don’t measure up to their siblings – “No Shame at All”, “Nowhere to Fly” and “Passion Killer” each sound like the kind of disposable modern metal filler that could’ve been written by any number of bands that none of us care about. Martin’s voice is on-point for sure, but the material doesn’t do him any favors. And then just like that, “Run Like the Devil” shakes off the cobwebs with its driving sense of urgency, setting up THORNS for a successful conclusion as it proceeds towards its exceptional closing title track.

I can’t begin to tell you how comforting it was hearing Tony Martin’s voice again on some new material after all these years; there’s something about his one of a kind, oh so British melodic rasp that just hits all of the right buttons. And it doesn’t hurt that THORNS is a mostly successful vehicle to deliver his return. Maybe someday we’ll finally get the Sabbath remasters from the IRS Records-era that Tony Iommi has been hinting at for ages, or maybe we’ll finally get Martin stateside for that HEADLESS CROSS tour he promised over a decade ago. In the meantime though, we have some amazing new music from Tony Martin to keep us content for a little while longer.