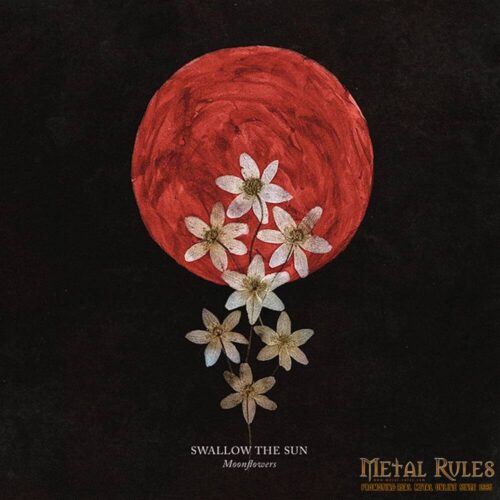 As one of the genre’s most celebrated figureheads, Finland’s SWALLOW THE SUN needs absolutely no introduction and continues to carry the torch for those of a death/doom persuasion. They may be over twenty years into their existence as a band, but their work shows no signs of slowing, nor the quality declining if recent efforts are to be considered. So 2021 sees the release of their eighth album in the form of ‘Moonflowers’ – how does it stack up amongst the previous seven?

The context with which ‘Moonflowers’ took shape was born out of tragedy, where loss is a prevalent theme that runs throughout the record. Where most artists proclaim their latest work as their favourite or best, etc., guitarist Juha Raivio has this to say:

“I deeply hate this album. I hate where it takes me, how it makes me feel and what it stands for me. I wish it wouldn’t.”

Given the context, it is an entirely reasonable assertion, and one that has led to a tremendous body of work. It almost seems callous commenting on a body of work so personal, so closely connected with despair and devastation – the optics of negatively critiquing something like this are not terribly good. Quite heartless, in fact.

Fortunately, there is no fear of that here as ‘Moonflowers’ is a beautiful piece of work that aches with pain, screams with cathartic anger and spirals with emotional atmosphere from start to finish. While there are occasions where the album can feel a little long, there is an enthralling sense of drama aplenty, with the likes of opener “Moonflowers Bloom In Misery” flowing neatly between melancholic splendour and howling heaviness; whilst the heart-wrenching “Keep Your Heart Safe From Me” aches with wistful romanticism. Debatably, the band’s most despairing effort is the weighty “All Hallows’ Grieve” – a cut where the band are at their melodic and ballad-like best, with the guest appearance of Cammie Gilbert (of OCEANS OF SLUMBER fame) providing a fitting addition to an already sorrowful effort.

Yet, arguably, the biggest surprise is the bleak fury of closer “This House Has No Name”, which opens with an unexpected foray into black metal’s blast-beats-and-shrieks territory. That it mixes with softer, morose passages seems to perfectly encapsulate the pain of loss in musical form; a wash of emotions that run the gamut from the explosive to the introverted. The soaring guitar melodies and swelling strings really raise the bar and make for an extremely rewarding and purging listen – if you were going to give a potential new fan a track that represents SWALLOW THE SUN, then this album closer would be a tremendous example.

Where artists tap into human emotion to create their work, it is often nothing more than mere lip-service. ‘Moonflowers’ does not do this, rather it embodies and embraces the context which gave it its start. In many ways, it frames it all neatly and creates a compelling record that is as much a harrowing journey as it is a piece of musical entertainment. Even referring to it as entertainment seems crass, but as a creation made to be enjoyed by others, SWALLOW THE SUN have delivered ably. A worthy addition to their catalogue.

1. Moonflowers Bloom In Misery
2. Enemy
3. Woven Into Sorrow
4. Keep Your Heart Safe From Me
5. All Hallows’ Grieve
6. The Void
7. The Fight Of Your Life
8. This House Has No Name