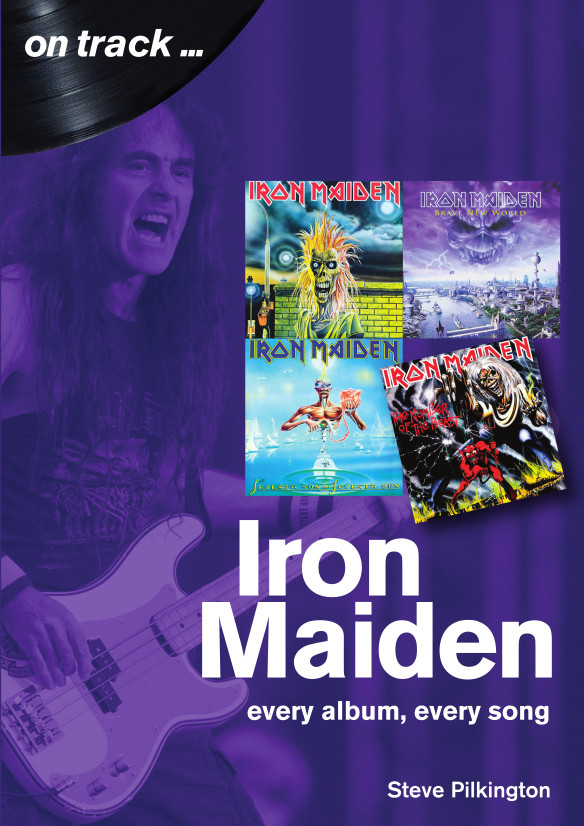 Back in October of 2019 I had the pleasure of reading a book by John Tucker from the On Track Series called Judas Priest:Every Album, Every Song.  It was (at the time) a relatively new series of publications by SonicBond Publishing.  The idea is that an author, an expert in a band will write a song-by-song analysis of that bands catalogue.

In that review of the Judas Priest entry, my concluding sentence was,  “ I have no doubt that the ‘On Track..’ series will continue to grow and hopefully publish more Metal content.”  I’m very pleased to announce that my prediction came true and we have a great new slate of books to review.  Courtesy of the good people at Sonic Bond I had the pleasure of reading and reviewing titles about Dream Theater, Iron Maiden and UFO.  Please feel free read all my reviews in this mini-review series.

It’s funny how much information gets repeated over and over when it comes to the most Metal popular bands.  I was looking at Facebook on Dec 25th and I saw many posts about Iron Maiden forming on Christmas Day back in 1975.  By coincidence that was the day this year (2021) I started to read the new On Track book about Iron Maiden.

When I started reading I said to myself, “I’ll bet that is the first thing author Steve Pilkington mentions”.  There it was, second sentence of the introduction on page 5.  I love it when I’m right!    My main point being is that there are so many books about Iron Maiden the material is starting to get redundant and predictable.  I own about 20 books related to Iron Maiden.  Their career has been dissected and examined under the microscope so frequently that any new info is so obscure that it is relatively useless except to the most die-hard Maiden fan.   However, I have to approach this review from the perspective of a person who perhaps has never read a book about Iron Maiden.  In that regard it passes the test very easily.

Pilkington is a funny and entertaining writer. You might recognize his name from his Black Sabbath song by song book from back in 2018 or from his prolific work in the UK rock press.  In this book, he deployed words like ‘gormless’ and ‘insalubrious’ very early on so I knew that even if he just regurgitated common Maiden lore that has been done 100 times before, at least it would be entertaining.  And it was.

The song-by song format is so fun and easy to dip into. Pilkington starts at the beginning, each album getting the briefest of introductions and then off we go. Each song gets a paragraph, an overview, some discussion about song-writing, some trivia, maybe a comment about lyrics or performance, and all of it is sprinkled with a bit of opinion, which results in very digestible chunks.  He does not get too technical in terms of discussing the actual musical theory, ie, construction of the songs, which I appreciate.

All the key information is nicely presented and Pilkington’s opinion is largely in line with,  what I suspect is the opinion of the majority of Iron Maiden fans, nothing too controversial.  I found myself nodding in agreement for the most part and recalling information that I knew 100 times over but tend to forget due to information overload, like the fact that, oddly enough, ‘Bring Your Daughter To The Slaughter’ was the band’s first #1 hit in the UK.    Pilkington doesn’t scrimp on info on later era stuff, it was nice to see tracks like ‘Faces In The Sand’ get some love and affection. For the record the book  does end with ‘Book Of Souls’, but I’m sure another chapter will be added for subsequent re-pressings.

Despite my mild detachment from the subject matter, again massive information overload about a band that has been covered extensively, IRON MAIDEN EVERY ALBUM EVERY SONG really is a top-notch work. It was a fun trip down memory lane and Pilkington made it light and bright and totally worth owning.