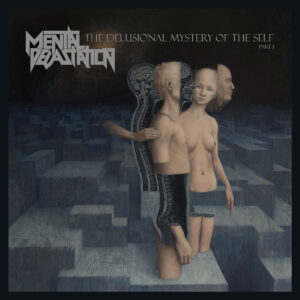 Chile’s Mental Devastation do a stellar job of mashing up the unbridled energy and agility of vintage thrash and technical metal on their long-in-coming second album. The loftily titled The Delusional Mystery of the Self (Part I), issued on New Year’s Eve no less, comes eight years after their debut Red Skies, which came out on a Mexican label and was, according to their promo materials, largely relegated to the Latin American market.

That shouldn’t be a problem this time, with the band having hooked up with the Swedish label Blood Harvest for a more global distribution potential, and, of course, the ubiquity of Bandcamp. And this is an album that certainly deserves some attention.

The band’s sound conjures the likes of Vio-lence, Forbidden or Testament and early Cynic or Atheist with its mix of old school Bay Area thrash chunkiness and lithe progressive flourishes. Frontman Alejandro Lagos offers a serious nod to both schools all on his own with his fluid bass runs and rambling vocal patterns that recall both Forbidden’s Russ Anderson and Vio-lence’s Sean Killian in their upper register shoutiness and sometimes free form-like delivery.

The quartet switch gears with relative ease, and demonstrate both ability and comfort when traveling in either direction, even on the instrumental “Perpetual Dualities,” which plays its showy leads and elastic bottom end against a cascade of chugging riffs. Even the album’s intro, “Genesis,” sees its acoustic false start give way to a crunching back half that segues into “Ascension” where the fellas let it loose.
The other instrumental, “Dans l’Absurde,” is the lone exception to the rule here, sticking with its Flamenco-style acoustic guitar all the way through as a lead in to the titanic finale “Reflections Over the Veils of Death.” More on that one in a sec.

Mental Devastation double down on just about everything on the aforementioned “Reflections.” The 10-minute closer delivers fireworks, fury and finesse in equal and ample qualities. And while the song is definitely too long once all of its parts are strung together, there’s a good seven minutes of genuine awesomeness to be found there.

One could assume that since this is billed as Part 1 there will be a Part 2 in the offing at some point. Be nice if it gets here before 2030, but for now, Part 1 offers lots to digest – and enjoy.