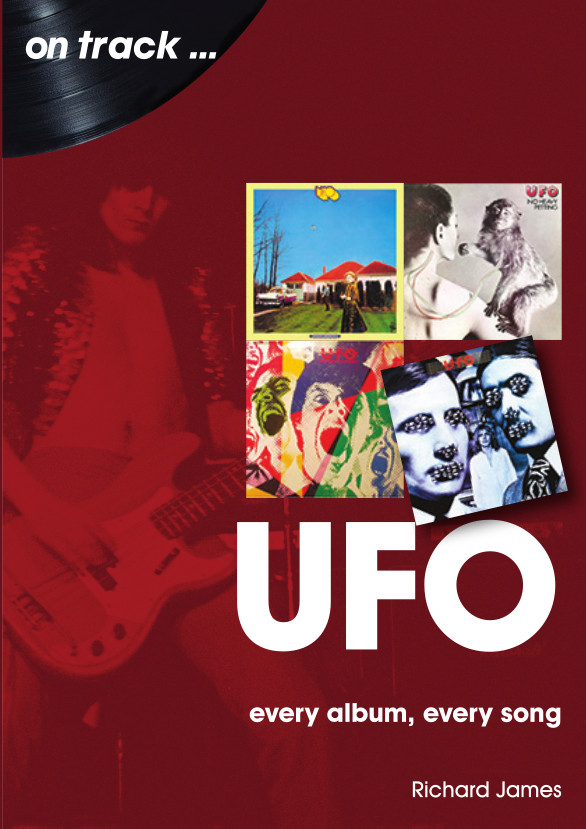 Back in October of 2019 I had the pleasure of reading a book by John Tucker from the On Track Series called Judas Priest:Every Album, Every Song.  It was (at the time) a relatively new series of publications by SonicBond Publishing.  The idea is that an author, an expert in a band will write a song-by-song analysis of that bands catalogue.

In that review of the Judas Priest entry, my concluding sentence was,  “ I have no doubt that the ‘On Track..’ series will continue to grow and hopefully publish more metal content.”  I’m very pleased to announce that my prediction came true and we have a great new slate of books to review.  Courtesy of the good people at Sonic Bond I had the pleasure of reading and reviewing titles about Dream Theater, Iron Maiden and UFO.  Please feel free read all my reviews in this mini-review series.

There are half a dozen good books about UFO and this is the second written in a song-by-song format, the first being Martin Popoff’s 2005 book, SHOOT OUT THE LIGHTS. The band has released five albums since then!

Of the three books in this little series (Dream Theater, Iron Maiden, UFO) this is the band that I know the least about. It could be factor of just having 23 studio albums spread over almost 50 years there is a lot of material to digest!

Author Richard James is a true fan! Based in England this guitar aficionado is classically schooled and loves this band.  The band grabbed his attention when he was but a lad and this book is his tour-de-force.  It is quite a task but James is up to it tackling all the albums with zeal. Track by track we go with insightful comments about lyrics, construction and arrangement all liberally laced with great trivia about albums covers, tours, producers and more.

James is very opinionated.  At times I felt he didn’t even try to be objective. For example, he states right out that STRANGERS IN THE NIGHT is the greatest live album of all time. Full stop. No argument. No debate. It’s just fact.  While I feel the majority of people a certain age, myself included, would probably agree that album has a special magic and on any given day is worthy of the title, such broad proclamations don’t seem to be as valid.  These books are after all, attempting to be semi-academic.  for example, saying, ‘widely accepted to be one of the greatest live albums of the 70’s’ would fly a little better.   However, you have to admire a man who sticks to his convictions!  As a guitarist he makes his disdain for pretty much every guitarist, except Schenker, known.  He knows what he talks about, that is his field of expertise but again, he dismisses anyone who plays fast often dropping words like ‘cliché’, ‘uninspired’, ‘unnecessary’, ‘meaningless’ and so on.  He really hates shred (and cover tunes!) and makes no bones about it!

I get the feeling that James is not really a heavy music fan. That is not a judgement but he seems to be less experienced in enjoying heavier music as demonstrated by his word choice. At times he used vocabulary like ‘brutal’, ‘sinister’ and ‘malevolent’ to describe the guitar work of UFO.  As a Death Metal and Black Metal fan, I kind of chuckled at his perspective because I have heard more brutal guitar work in a car commercial than on an UFO album.  Let’s face it, UFO are just basically melodic Hard Rock at their heaviest.  I’m not implying he is wrong, if he thinks the riff to ‘song X’ is ‘brutal’ it is!  It just that his perspective seemed strange to me and I’m a UFO fan!  I imagine he would think Cannibal Corpse to be utterly unlistenable.

I do not want this review to turn overly negative but for a guy who loves UFO James sure is critical often being sarcastic and dismissive of the songs he doesn’t enjoy. The whole sort of dark cloud over at least two-thirds to three-quarters of the albums he doesn’t like and when he likes something it’s god-like!  He wears his heart on his sleeve but he is not really out of line with what, I suspect, most UFO fans feel.

Despite all that, James does a great job describing the band and their career. I think veteran UFO fans will find lots of value here, I certainly did. I suspect  that now the band is essentially done (two members deceased and a high-profile retirement) we will see more books about the band hit the market soon!