“Operation Midnight” is the first single from Hyperia’s upcoming 2022 album “Silhouettes Of Horror”.

Canadian thrashers HYPERIA, formerly of Calgary, AB, now residing in Vancouver, BC announce they will be self-releasing their new album “Silhouettes of Horror” this coming March 2022. The full-length follows their 2020’s “Insanitorium” unleashed via Sliptrick Records and their 2019 EP “Fish Creek Frenzy”.

“We think that we have polished our sound and pushed ourselves to create what we believe is a newly refined vision. This record has pushed the whole band to their limits, and the songwriting, performance, and the production value is a huge step up. We feel the fans will enjoy this new album even more than our first full-length,” adds Collin Ryley.

Energetic, melodic, fast, psychotic, and dynamic are the elements that make “Silhouettes of Horror” that old and new fans of thrash, NWOBHM, and power metal will appreciate. The band even included a cover hommage of Abba’s “Gimme Gimme Gimme”. For the recording of “Silhouettes of Horror”, Hyperia also recruited good friend and session drummer Gord Alexander (Tessitura, Tides of Kharon, Immunize).

Most of the lyrical themes on “Silhouettes of Horror” revolve around inhumane government experiments, sleep disorders, and night terrors.

Today, in lead up to the release of “Silhouettes of Horror”, Hyperia is sharing their new music video for the first single “Operation Midnight”, a hard-hitting track with melodic vocal lines and sporadic guitar riffs. It’s a catchy and memorable song that portrays what the whole new album is about. 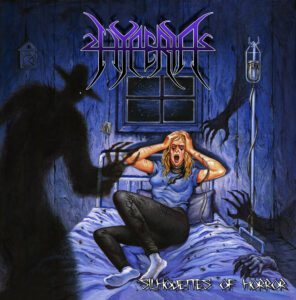 “Operation Midnight was a song that we wanted to be fast, punchy, and hard-hitting the whole way through. It is accompanied by a music video filmed by City Zero Films that was shot a few hours northeast of Vancouver in a secluded foresty area. The song is a good song to set the pace of the album, lyrically and musically. The lyrics focus around nightmarish hallucinations and terrors and seeing black hooded figures at the side of your bed. It has melodic and heavy parts that showcase the diversity of our new album.” the band comments.

HYPERIA (originally from Calgary, AB now based in Vancouver, BC) is a Melodic Thrash Metal band known for their wailing vocals, shredding guitars, and fast, heavy music. Formed by Colin and Marlee Ryley in September 2018, they found 3 members from the local metal community and hit the ground running. Since the release of their debut EP “FISH CREEK FRENZY” in 2019, HYPERIA has been thrashing venues and taking the Western Canadian metal community by storm.

In April 2019, HYPERIA announced their signing SLIPTRICK RECORDS, who released their debut full-length album “INSANITORIUM” in January 2020. The band celebrated their release to a 300 person sold-out show in their hometown of Calgary, Canada.

Later that year, the band announced the departure of their previous drummer Jordan Maguire, while at the same time revealing the commencement of their second record “SILHOUETTES OF HORROR” with session drummer Gord Alexander (Tessitura, Tides of Kharon, Immunize). The album was completed in June 2021 and is due out in March 2022