Thanks to Axel Wiesenauer at Rock’N’Growl Promotion for setting up the interview.
Thanks to Black Viper Records for the promo pictures of the band. 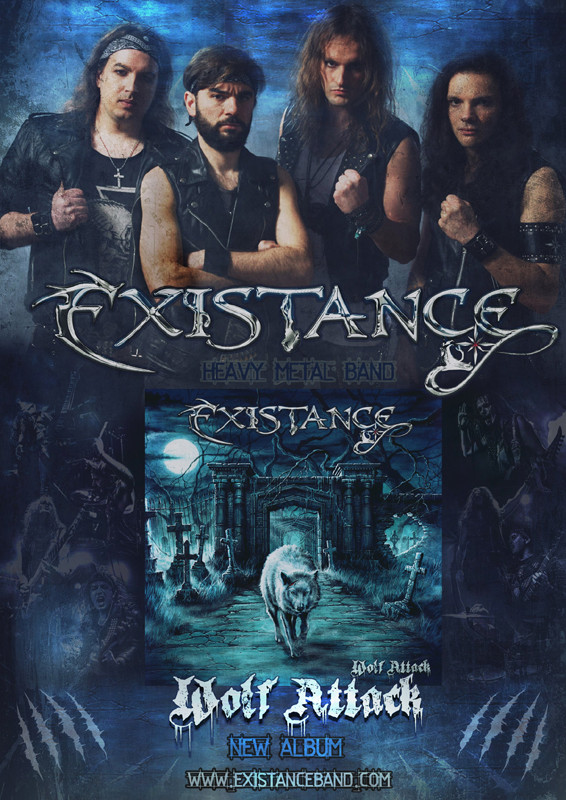 From France comes Existance; a band that’s been around since 2008 and just unleashed their new album, called WOLF ATTACK. Their fourth full-length, it hit the streets at the end of October 2021. WOLF ATTACK is produced and recorded by Francois Merle (Manigance), mastered by the legendary Jacob Hansen, with cover art by Guatemalan artist Mario Lopez.

I had the pleasure to have a short chat with sole remaining original member Julian Izard about why it took so long to release a new album (their last one, BREAKING THE ROCK, came out in 2016), work on the new album, live shows, why the band only plays in France and nearby countries, and of course, the COVID-19  pandemic and the status is in France at the moment. If you like well-played melodic heavy metal, this is something for you to check out. Read on to see what Izard has to say.

Hi Julian, I hope you and the rest of the guys in the band are doing well! Are you ready to kick off the interview?

Yes, we are fine despite this pandemic. I think we’ll definitely have to learn to live with it.

First of all, what’s the status of the pandemic in France at the moment? Are people willing to get vaccinated?

A big part of the French population is vaccinated. At the moment the situation is getting worse, like our neighbors in Belgium or Germany. We hope it will get better soon! But let’s talk about music!

Why has it taken the band so long to follow up the previous album, 2016’s BREAKING THE ROCK?

We really started to work on the new album when Géry joined the band in 2017. The recording was done in May 2019 and we planned to release it in the beginning of 2020, but the pandemic delayed everything and we didn’t want to release a new album without the possibility of playing live. So we had to wait the best moment. It was so long but now we’re back! 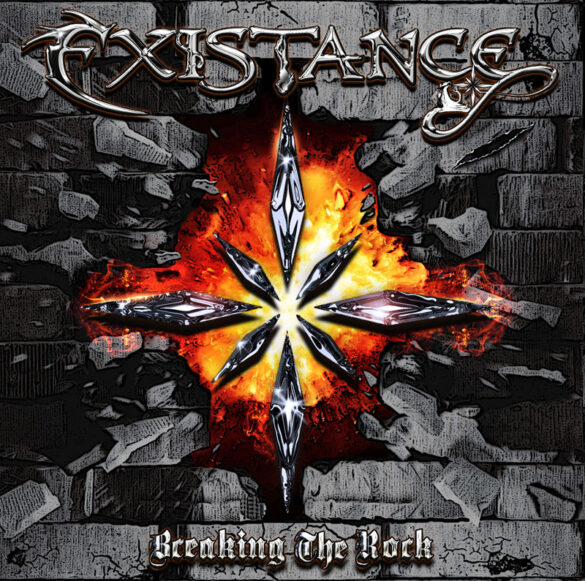 Who came up with the band name Existance? Does it have any special meaning to you?

When I started the band in 2008 I already had the idea to name it “Existance”. At the time, people of my generation didn’t listen to a lot of metal and those who listened to it didn’t know old heavy metal bands. I didn’t want this music to disappear and like many other bands I wanted to keep sharing the spirit and the power of this music.

The info sheet states that Existance is one of the most active French bands in the underground heavy metal scene. Is that correct and why do you think you’ve stayed an underground act?

Yes, we are still an underground band with a “do it yourself” approach to a lot of things. We manage all physical sales of our music and all the merchandising aspects. It’s a hard work but it is currently the best way to progress and to invest for the band. 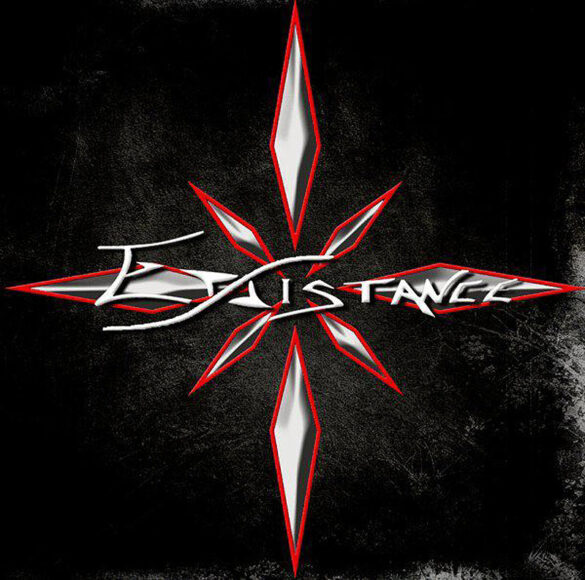 The band have toured a lot in France and the surrounding countries but not much in the rest of Europe; why?

We are a French band so at the moment we are mainly known in our country. We had the opportunity to play on the European tour of Primal Fear and Riot V in 2018 and we’re up to find a new tour like this in 2022. We know it’s the best solution to reach new fans is to play everywhere we can!

When did the band start to work on material to the new album? Who writes the music and lyrics?

We really started to work on this album when the new line-up was completed with Géry on the drums in September 2017. I’m really proud of this new line-up for Existance. We are all on the same wave length and WOLF ATTACK is the perfect reflection of this good mood. For the musical aspects, I composed some songs and Antoine did too, but most were composed in rehearsal when we played together. I wrote most of the lyrics because it’s really important for me to understand the meaning of the text I’m singing. Still, everyone is also free to write lyrics; Antoine and Géry did. It is a team effort.

Were there any left over songs that didn’t make it to the final edition of the album?

Yes, we always compose more songs than necessary for a new album. In this way you can really choose the best sequence of songs to have the perfect album with a logical continuation. Sometimes it’s quite hard to make a choice but you always have to consider the whole album.

The lyrics of “Jenny’s Dreams” talk about a young girl called Jenny. She’s forced to work as prostitute to get money to survive, and she dreams to move on to save her life.

“Preacher of Insanity” talks about idolatry and all the crazy choices and sacrifices you have to make in life to follow your god. Sometimes you think to make the right decision but the mind is easily manipulated. 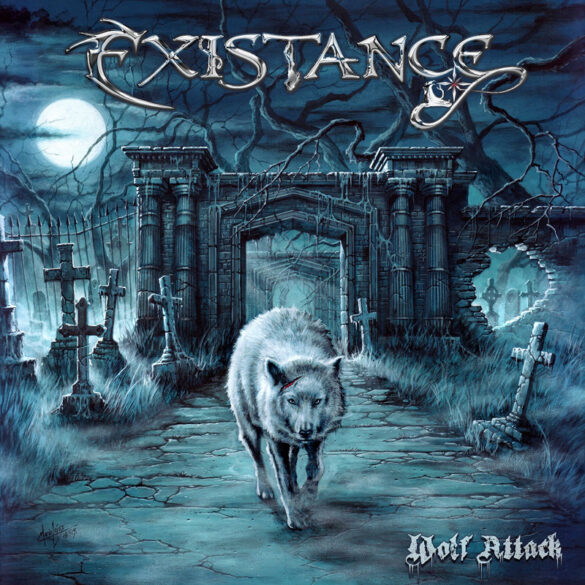 Why did you call the album WOLF ATTACK?

The wolf is a reference for the band, a kind of tribute. In the past my late father was nicknamed “the snarling wolf” in his band. They also had a song called “The Wolf”. So obviously the first song I wrote with Existance was “Son of Wolf”, which is the first track of our first EP. From the start I was conscious that many people were curious to hear what I was capable of. WOLF ATTACK is also a reference to that. If you look at the cover of the album, you will see that now the young wolf has grown up and despite his scars he will try to move forward alone.

Was Mario Lopez given free hand to create the cover art work to the album or did the band have any instructions from the band?

We just gave him some ideas we wanted (a white wolf, Highgate Cemetery, blue-ish night) and he proposed a work that exceeded our expectations! It’s the first time we worked with an artist for the cover and the result is awesome. If you take a good look at the cover you will find some references to our previous albums.

The last song on the album is “Gwendoline”, which is sung in French. Do you usually sneak in one song in your native language on your albums?

This is a cover of a song written by H-Bomb actually (off of their album ATTAQUE release in 1984). This album is dedicated to my father. He was very close to each musician and it was very important for us to pay tribute to him. “Gwendoline” is the H-Bomb’s song that represents him the most and of which he was the proudest. Many of our fans were asking us to cover this song. Now the circle is complete and we will not play it live anymore. It is easier for me to write lyrics in English because most of my favorite bands sing in this language.

I’d say the album is great with some really well played melodic heavy metal tracks. Are you happy with the outcome of WOLF ATTACK?

Thank you! Sure, we have a lot of nice reviews from different countries and many good comments from people and the media! We are really satisfied and proud of this new album. Now we want to share it with all-metal maniacs around the world, past present, and future!

The band played four shows this fall. Were there any restrictions during those shows and how was it to meet fans live on stage again?

No particular restrictions, except the COVID-safe ticket to get access to the show. It was so nice to come back on stage and feel all this energy and adrenaline again. Playing live and interacting with the crowd is a very important thing for us. They are our motivating force, those who allow us to still be here today. 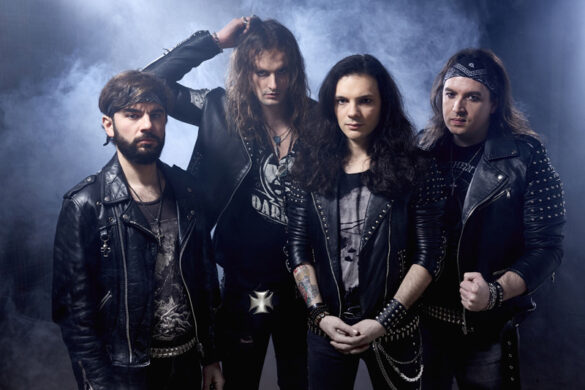 I know the band has some scheduled shows for next year, like support to Rhapsody of Fire in France, as well as the Hellfest festival. Are you excited for those shows and does the band have more shows planned?

Yes, if sanitary conditions don’t change the plan is that we’ll play two shows on January in Paris and Grenoble with Rhapsody of Fire and Nightmare. These shows are almost sold out so we are very pleased to be part of this tour. In addition, some postponed concerts have yet to be confirmed in spring and summer 2022. We are also in discussion at the moment to find a new tour across Europe.

Concerning Hellfest, it’s really the event that we are looking forward to. Playing on the main stage with mighty bands like Metallica, Gun’s Roses or Scorpions is a dream come true!

Are you satisfied with what you and the band have accomplished so far or are there things you haven’t done yet or maybe that you regret doing?

The band has really progressed since 2008 and I’m proud of everything we have done so far. There are no regrets at all. My father always told me, you get anything you want through work and never take it for granted. We must constantly continue to work and keep this state of mind as long as possible. You have to be patient but stay humble and have fun above alls.

Well, that was all for me and Metal-Rules.com, I wish you and the Existance all the best in the future. Do you have any final words of wisdom to share with fans and readers?

Thank you for this interview and for your interest in Existance. Stay metal and see you soon on the road!