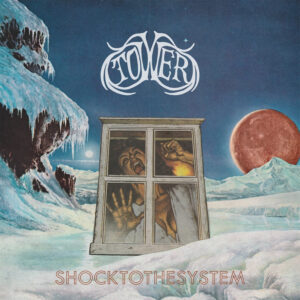 New York City’s Tower is making quite a buzz around the metal world right now. With the popularity of the NWOTHM taking hold, Tower serves up some late 70s, early 80s inspired heavy metal. However, it is the band’s powerful front woman that has really caught many a metalhead attention. Her vocal delivery is powerful and is very reminiscent of early Doro Pesch. But what is really creating that buzz is their sophomore full length release, SHOCK TO THE SYSTEM that is truly the source behind all the commotion, and for good reason. SHOCK TO THE SYSTEM is thirty-nine minutes of pure traditional heavy metal, composed and produced as it was meant to be.

As we kick things off with “Blood Moon,” first there’s that old school guitar sound of the opening riff then that scream! Sarabeth Linden has one of the most powerful and intense voices that is gracing metal right now. This is not your technically accurate opera singer voice. Instead she has that perfect combination of Doro’s metal power and Janis Joplin’s soul. These vocals are intense. “Prince of Darkness” is quite possibly the best example of how incredible this intensity is and his her best performance on the album, and that is a hard thing to pin down. Her tone, her intensity and her metal attitude is what makes her stand out in the current crowd. The best part is that they are not perfect nor meant to be. The only words I keep saying is intense.

The songs themselves are another thing altogether. This band knows how to write some seriously catchy songs that go from face melting speed and intensity like “Metatron” to over the top epic metal songs like “In Dreams.” The riffing is incredible and there is no shortage of monstrous riffs on this album. “Running Out of Time” is the perfect example of the riff fest that takes place on this album. This is another speed fest that is non stop metal madness from beginning to end. The soloing ranges from old school 70s hard rock soloing to some slick metal shredding. The song has such an intense 70s feel with the catchy chorus that only a metal song can deliver. “The Black Rose” is another ripper that has one of the most simplest but best choruses in metal Sarabeth’s vocals just drive it. Which brings me back to the absolute beast that is “In Dreams.” This song is is driven by the guitars but her voice is just as powerful as the instruments driving the song. Once again, such a simple chorus with incredible results. Top it off with a kick ass solo and you have one of the best current metal songs going.

Once again we have another band playing traditional metal being recorded old school that also brings the talent to the forefront. With songwriting this strong and those incredible vocals there is no where for this band to go but up. As I said, they are creating quite a name for themselves in the metal community and all of that praise is well deserved. What can I say, this album is essential but beware of the “Powder Keg” that will burst from your speakers! 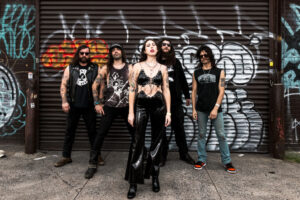