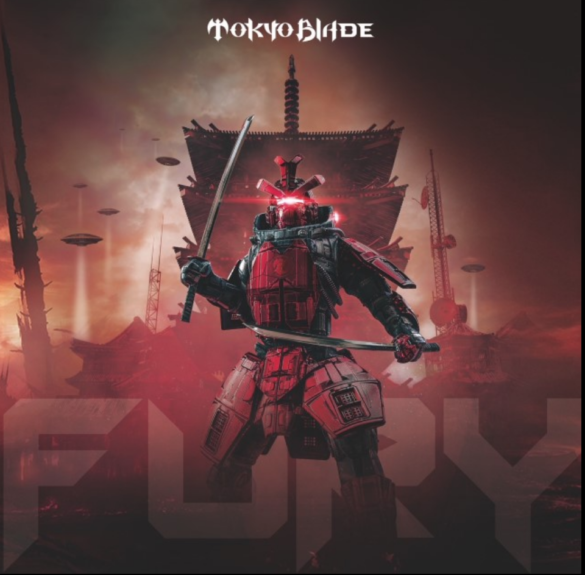 Tokyo Blade is the epitome of underground survivors.  Theirs is a classic tale and very similar pattern of many other bands of the time.  Coming hot out the gates during the New Wave Of British Heavy Metal the band had considerable success.  Then is a well-intentioned but perhaps misdirected play for a broader (ie, North American) audience the bands sound evolved.  The result was one that neither captured new fans or appeased the original ones. It is a story as old as time itself and a trajectory that many bands followed.  The difference between Tokyo Blade and the wasteland of bands that failed and/or quit in the mid-90’s, is that Tokyo Blade kept going under the auspices and sheer will-power of founder Andy Boulton.

The band did indeed keep going despite several ill-fated attempts to reinvent themselves and a revolving door of singers. At a certain tipping point the band transcended their lost years and became a respected heritage act.  Ex-members rejoined the fold. Small retro tours and festival appearances were booked.  Reissues hit the market, new record deals emerged and over the course of ten years Tokyo Blade has put out four solid albums, FURY being the latest.  I’m embarrassed to say this is the first Tokyo Blade album reviewed on Metal-Rules.com.

TOKYO BLADE is now on Dissonance Records owned by Cherry Red so that has provided some stability. Four-fifths of the, dare we say ‘classic’ line-up is intact and has  been for about a decade now. FURY is the bands 11th or 12th album, depends how you count as there is some debate about the status of MR. ICE from 1998 which was a reissue of the tracks that were intended to be their sixth album back in the early 90’s.

The stars are in alignment.  History lesson aside, how is the new album?

FURY is pretty furious.  I don’t have a comparison from the ‘comeback’ years but this sounds as good, if anything faster and heavier than the 80’s material. The album starts with a one-two-three punch of fast songs before easing off the gas a little. Album favourite?  Likely ‘We All Fall down’, mid-way through the record, with it’s creepy intro and driving pace.  ‘Rhythm Of The Gun’ is another rocking favourite.  Lyrically the band is slightly darker these days, as well, maybe a mean edge showing they still have something to prove, maybe as evidenced by the spoken word intro to ‘Message On The Wall’.

There is one point I struggled with on FURY.  There is this odd vocal effect on the vocals of Alan Marsh.  I’m not sure if it was artistically intentional or if it was an attempt to mask a failing voice.  Either way, the ‘singing through a megaphone’ electro-effect really hampered the impact and delivery of his fine voice.  Aside from that the album has decent production values across the board.

FURY is also quite long.  Too long?  I don’t mind long albums by any means, but 15 songs at almost 80 minutes it might deter casual listeners or prompt the cynics and critics to drop terms like ‘filler’. I don’t feel that way but I could see how this mammoth album may deter some.

I’m ashamed to admit that I lost track of Tokyo Blade in the 90’s.  I bought and enjoyed the first five albums but my loyalty tapered off. The recent KNIGHTS OF THE BLADE box-set helped reaffirm my lost for the early days of the band and rekindled my desire to seek out those last seven studio albums.  FURY is a fine example of traditional/classic Metal done correctly.