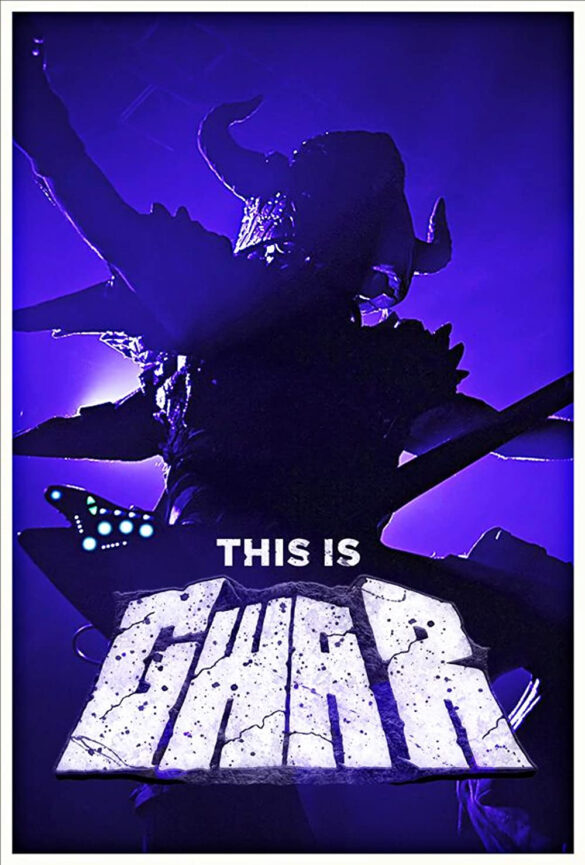 One of the more interesting phenomena in music culture is how many people listen with their eyes.  I find this unfortunate scenario occurs even more so with the experienced music critics and journalists.   After a few years they think that they have head/seen it all and tend to jump to to conclusions, and tend to be dismissive or critical without ever actually listening to the actual music.

I think GWAR epitomizes this scenario. For obvious reasons it is even harder for cynics and critics to ignore the costumes and actually listen to the music.   However GWAR doesn’t make it easy on themselves by perpetuating the outrageous image for almost four decades now.

That is one of the main underlying themes of the new documentary THIS IS GWAR. They want to be taken seriously but how can you?

I recently had the pleasure of attending the Canadian Premier of the film at the Calgary Underground Film Festival and it was very enjoyable and enlightening.

Directed by Scott Barber this rockumentary runs just under two hours.   Shot in the classic ‘talking heads’ style the film inter-spliced dozens of interview clips with massive amounts of archival footage. Normally this might be a bit dull but because it is GWAR there is always something wacky and weird to look at.

Several years back GWAR put out a pretty massive hard cover book called LET THERE BE GWAR which I reviewed here in Metal-Rules.com back in October of 2015. Even after reading the GWAR autobiography I still learned a huge amount about , as the movie promo puts it, “the humans who’ve fought to keep GWAR alive for over 30 years”.  I found the interviews with members of GWAR (out of character) very revealing more so than the history of the art collective squatting in the abandoned diary factory in Virginia.

There is a very human face behind there very inhuman faces of GWAR, it is a human interest story; love affairs, politics, addictions, in-fighting, tears, a shooting, soured record deals  global domination and tragic deaths.

The film follows the bands epic career in a linear fashion as one might expect and a handful of celebrities (Brian Slagel, Weird Al, Bam Magera) make appearances.  There must have been enough archival footage to make a 10 hour documentary!  It was rapid fire, much like a GWAR concert, there was so much going on in the film.  It wasn’t edited poorly, it was just a busy film especially the manic live footage.

The rapid succession deaths of Cory Smoot and Dave Brockie made for some very difficult times. After the death of founder and creator Dave Brockie the remaining members of the band (some of them had been in the band for over two decades) had a very human reaction and found it very hard to carry on.  The collective employed about 100 people and they reasoned were they expected to just quit their career and fire dozens of people?

Over the years many people had come and gone from the GWAR organization but by making the decision to carry on after the death of frontman Oderus Urungus, GWAR became an institution that transcends individual members.

Of the possible 100 people who have been in GWAR, Mike Bishop is the only original member left and if you go back to the pre-GWAR band Death-Piggy, technically there are no original members left in the band.

If you go back and look at a few of my reviews of GWAR albums I have always maintained that if you strip away all the extra material (the art, props,costumes, the blood etc) this is a killer Metal band under the rubber suits.  However this review is not about me, but was nice to see that while watching this documentary in the theatre with about 60 other people, that band feels the same way as I do.  GWAR are a victim of their own success and get no respect.

THIS IS GWAR is currently on the film festival circuit and is slated for release on Blu-Ray in 2022.

Details on release available at IMDB.