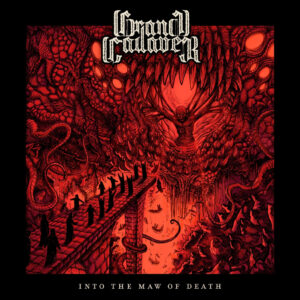 Swedish death metal has been one of my favorite sounds ever since I first heard LIKE AN EVERFLOWING STREAM in the late 90s. Although that was well after it’s release but given he state of metal in the States it was the internet age that exposed me to what I was missing during the earlier part of the decade. The guitar sound, the technicality, with the slight touch of a little melody as the hook. When I found out about Grand Cadaver is when I discovered that the band was formed by Dark Tranquillity front man Mikael Stanne and I was immediately intrigued. Mikael Stanne is a veteran of the scene and I’ve always wondered how he would approach a straight ahead death metal album. Mikael Akerfeldt (Opeth) pulled it off with perfection in Bloodbath so I was extremely curious. The result is their debut full length, INTO THE MAWS OF DEATH, a really strong effort and Stanne’s execution has a lot to do with it.

As soon as the first riffs assault your ear drums you realize this is a special album. That Swede-death guitar sound stands out immediately. The riffs and tempo move from fast and ferocious to slower and heavier almost doom riffs. The Swede-death tremolos are also prominent. Then the vocals. Mikael Stanne sounds right in his element here. His growl has has always been one of my favorites and he just lets loose here. The opener, “Disanimated,” just pounds you into submission for three minutes then abruptly moved to “Soul Infestation” and I must say Mikael sounds evil here. Then you have “Grim Eternal,” where the tempo is slower but the song just steamrolls right over you. Heavier riffs dominate this song and Stanne sounds incredible as he does throughout this album.

What I do find a bit interesting is the lack of solos on the album. The riffs are sick and the songs are well put together. I just think that some shredding is needed on here and there are a few places where it was a missed opportunity. The title track is a perfect example. Right near the halfway point at the end of the chorus a godly solo would have been perfect there. I’m not saying it was essential but it could have enhanced the almost six minute opus. As I said, that is not the only example and it really does not make the album unlistenable. The riffs and the atmosphere keep it interesting. “Manifest Insanity” has some insane riffs going on and has such an eerie vibe that you almost don’t miss the solo, but it would have been nice. That has been the neverending debate between metalheads is the necessity for solos. I have always said I’d never say a solo is inappropriate but I can understand where some would say they are not always necessary. They are a distinguishing characteristic of a metal song however some more extreme metal genres can get away with not having a solo if the atmosphere and riffs can carry it.

Grand Cadaver has a number of singled and EPs under their belt but INTO THE MAWS OF DEATH is their debut and is a rather strong debut. These guys are veterans of the scene so you would expect nothing else. The riffs and the execution are done really well and these songs create that old school atmosphere in each song. I just think a few tastily done solos would have taken this album to the next level, but I’m not one to throw the baby out with the bathwater. There is a lot to offer on this album and the lack of solos does not take away from the Swede-death atmosphere. I still highly recommend getting this album! 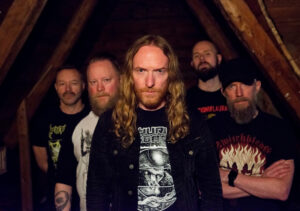