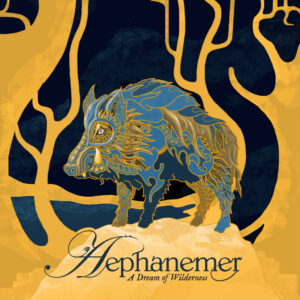 Just because I call myself an elitist does not mean I am completely closed minded. I actually love some of the subgenres that the “elitist community” (Is there a such thing? If there is I’m offended that I haven’t been invited to any of their meetings!) would want my head for. I love symphonic power (or flower) metal. I love melodic death metal….especially the much maligned Gothenburg sound. When Alexi Laiho combined power metal with melodic death metal I was elated! Now we have France’s Aephanemer with their third full length A DREAM OF WILDERNESS. Two previous albums in and this band somehow escaped my radar but that has changed. This band has seriously changed the game here and have offered a huge offering of symphonic melodic death metal.

First thing we need to acknowledge here is vocalist and rhythm guitarist Marion Bascoul. Not only does she do some ferocious growling that reminds me of Crypta’s Fernanda Lira but she has a beautiful, almost angelic clean voice. Game changed, right? The music is seriously huge symphonic power metal but with more emphasis on the riffs along with the standard keys and symphonics. After the intro the proper album opener, “Antigone,” sets the mood for what is in store for the next 50 minutes. Dual lead riffs over some keys leading right into Bacoul’s growls. The riffs are pretty serious but you can also tell that the solos on this are going to be insane. In fact dual leads drive a lot of the song and they are wicked good. Martin Hamiche is in charge of that fretwork while Bascoul handles rhythm along with those growls. Then we get to the chorus and between those growls is the most angelic operatic voice to grace metal in a while. And the melodies are very much classical in their approach; this band knows how to write huge songs…all this from the first song. That’s the treat we are in for!

As with most metal the lyrical references are usually historically relevant as with “Le Radeau de La Méduse.” Based on the painting of the same name (translates to The Raft of Medusa) by French Romantic painter Theodore Gericault this song is a seriously good song and showcases the great fretwork that graces this album. Another standout is the first video/single released “Panta Rhei.” This is such a great song with all the ingredients of an amazing power metal song; the speed, the melody and killer riffing. The Bascoul’s transition from growl to clean is flawless as usual. This was the first song I had heard by this band and it will probably always stick with me as it did when I first heard it. The lead guitar and keyboards just flowing through some melodic scales just adds to the atmosphere. The title track immediately following is another example of how epic this band can be in the way they use their keyboards, not only for symphonics but to compliment the leads. The song moves from intense to beautiful seamlessly and is definitely capable of stirring a lot of emotion.

When you make a discovery that seems to be exactly what you have been looking for is so satisfying. How I have never heard of this band is beyond me. All I know is that there is some serious talent and incredible songwriting going on here. It’s one thing to write an incredible song but to execute it perfectly is another and Aephanemer is capable of both. Out of no where came A DREAM OF WILDERNESS, one of the best albums of this year and could be a late entry in the running for AOTY. We shall see….in the mean time you need this album in your life! 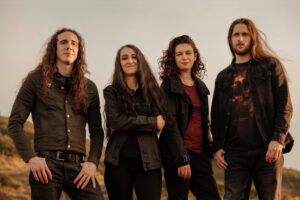