Even in a global pandemic nothing can stop THE OCEAN. The Berliners proudly present an unusual live album that is a testimony of strange times: their Phanerozoic concept album performed live in its entirety at a time when no shows were happening anywhere in the world. The band took the chance and prepared two very special live stream shows, performing both parts of their magnum opus Phanerozoic in its entirety. Part I was recorded at Pier 2 club in Bremen, while Part II was recorded and streamed for Roadburn Redux 2021. Today, the band are celebrating the release of Phanerozoic Live with a pair of live chats, discussing both parts of the album. 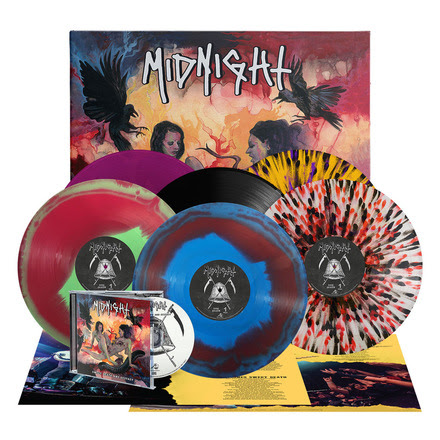 Each album comes in a variety of limited-edition colored vinyl and can be found HERE!

There’s no dawn for MIDNIGHT, and Metal Blade Records is proud to announce the re-issue pressings of the thrashers three classic albums – No Mercy For Mayhem (2014), Sweet Death and Ecstasy (2017) – both available today – and Satanic Royalty (2011) – available December 10th, 2021*.