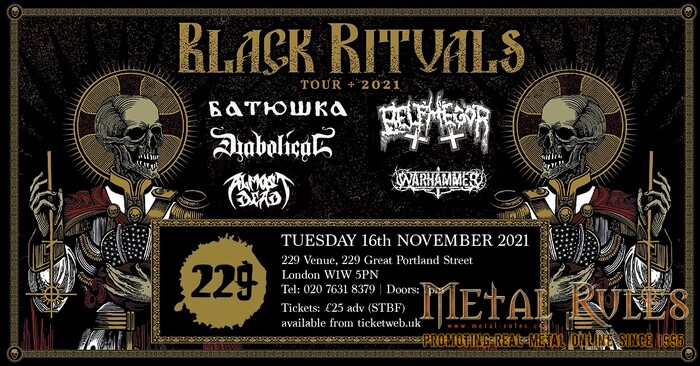 Seeing bands from all over the world alive and well on stage does seem to be making a comeback here in the UK, as was the case Tuesday 16th November at 229 The Venue.

Polish orthodox black metal outfit Batushka (the version founded by Bartłomiej Krysiuk) were headlining the Great Portland Street venue accompanied by Austrian blackened death group Belphegor. With a line-up like that, I certainly could not resist dropping in and witnessing some incredible talent from far and wide.

However, due to a travel issue beyond my reach, I sadly missed the opening act: Greek thrash metal group, Warhammer.

This was particularly disappointing as I had only just discovered these thrashers in my ongoing love of the Hellenic metal scene. I would like to take this opportunity to apologise for not seeing you, Warhammer, but from the information relayed to me by my photographer, Miguel, it seemed you put on one very good show for an opening act.

A good crowd had gathered by the time I arrived and the openers had allegedly got the revellers all riled up and happy with a strong and happy vibe. As I walked into the venue surrounded by happy people, it did seem that had been treated to a good dose of thrash metal, so I had reason to believe Warhammer’s set was good.

After seeing a few friends and scanning the merch stands it was time for the second act of the night, one all the way from the beautiful state of California: Almost Dead.

Having looked up this band just before I set off for the gig, I was not so impressed with their sound as groove metal mixed with thrash and borderline death metal isn’t my regular metal consumption, but this live show proved that such a fusion can offer a very memorable gig.

Channelling some strong and hefty vibes in the heaviness of their tunes, Almost Dead began an onslaught of songs covering some dark and taboo topics in a manner that was upbeat to say the least.

Even though my musical palate wasn’t wowed by the band’s fun and jovial musicianship, I will give them credit for getting the crowd headbanging.

I think what would’ve made this gig better would be if this was a summer festival show where Almost Dead would’ve been perfect for a sunny afternoon show with a good level of beer to accompany the band’s aggressive joy.

Overall, Almost Dead gave a nice rendition of metal music which appears violent on the cover but deals with serious topics in a manner that has the audience feeling pumped up and revitalised like after a good workout in the gym.

A very good job, Almost Dead and I’ll catch you next time you’re in town.

By this point in the evening, the venue was nearly at full capacity and it had been fun watching the odd mosh pit take place. For a Tuesday night, I was impressed to see this sort of turn-out and I now knew the love for music and live shows has not waned one iota given the hardships of the last two years.

Now it was time for some mighty fine death and black metal fusion from one of Europe’s metal homelands. 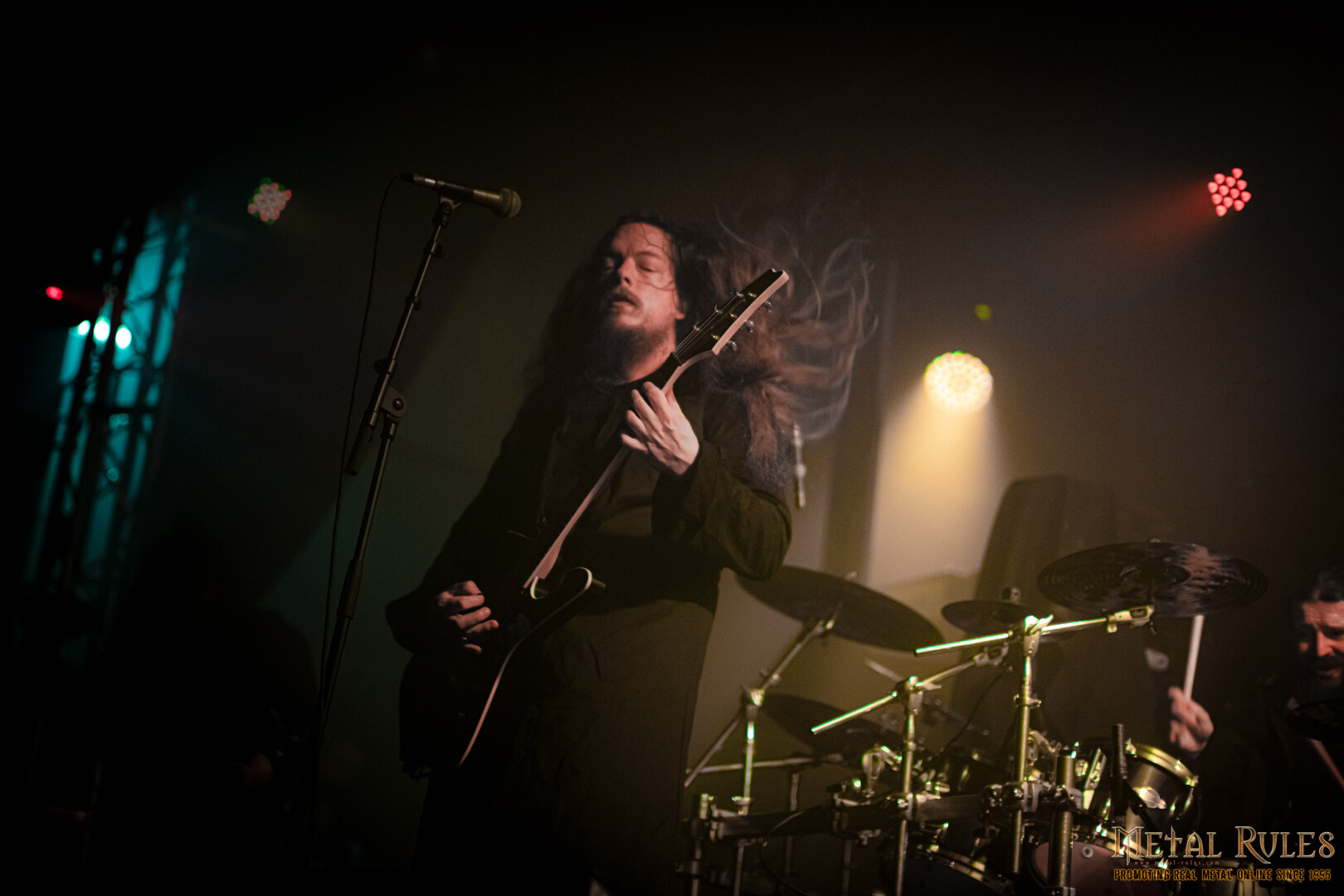 Diabolical, hailing from Stockholm, Sweden came on stage dressed in cloaks and leather clothing making them look like a group of acolytes from some dark, satanic cult ready to perform some horrifying ritual.

And said ritual was one performed with such fortitude and severity that it made me lose track of time, as Diabolical’s amazing range of shredding guitars, screamed and growled vocals and drill-like drumming had me hooked from the word go.

A trance that fixes the audience all the way through performance is one of the greatest achievements a band can claim, which Diabolical had with their catchy blackened death metal tunes.

Their interaction with the crowd was also fun as they were humble in thanking the hundreds of metalheads for coming out on a weeknight to lend their support as the band had been sitting around at home waiting for the music to return.

Diabolical have that power to entice the audience with their hardworking talents and I am pleased I’ve discovered them now as their albums have been in circulation on my Spotify playlist ever since. Great job in telling us Sweden is still a metal powerhouse, Diabolical.

With Swedish might out of the way, we turned to Austria for the next onslaught which had to be, in my opinion, the highlight of the evening. 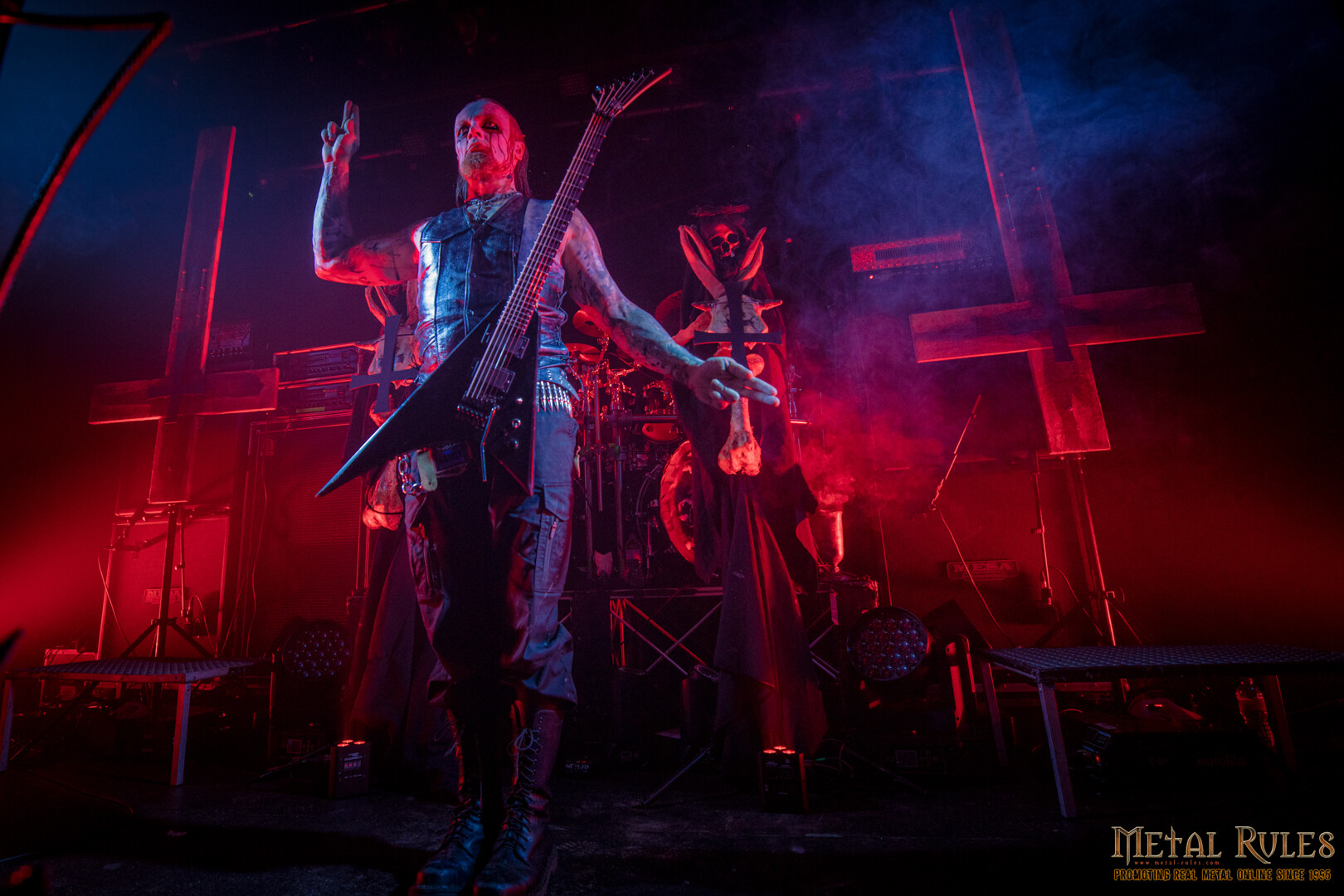 Belphegor, all the way from Salzburg with nearly 30 years of satanic musical might under their belts, arrived in full force complete with mic stands fashioned to reflect their blasphemous and perverted persona.

This was probably the eighth time I’ve caught the Austrians in concert, but a damn good show has always been what they give, and tonight was no exception.

From the word go we were treated to some of the most horrifying and death-ridden tunes about the harshest of things that can be found in any kind of religious or blasphemous text.

Vocalist Helmuth had the crowd in the palm of his hand once that first note left his lips and his growling screams echoed around the room like some freshly raised zombies ready to feast on the brains of the living.

Drummer James Stewart managed to make the drumkit sound like a rapid-firing machine gun tearing into the guts of an enemy charge which accompanied guitarist Molokh and bassist Serpenth in the band’s excellently putrid repertoire.

This is the most memorable show I’ve seen from the Austrians since they played Bloodstock 2015, where they were my highlight of the entire weekend.

In my honest opinion, it should have been Belphegor headlining this night and it was a shame when they had to leave as the crowd were screaming for more – myself included.

So we’d had Greece, America, Sweden, Austria and now Poland to end this night of multicultural metal excellence.

Though, excellence is not quite what I came away with from the headliners, but I think the crowd disagreed with me on this.

One thing that I always find a bit odd about live music is bands who seem to spend more time on their stage persona and props than the actual music they deliver. If it’s a band that has risen to the highest levels of popularity and influence like Maiden, Priest, etc then you can understand the theatrics of their shows. But for a band whose legitimacy is still disputed to this day after starting one of the biggest feuds in black metal history, spending lots of time turning the stage into an orthodox church does make you frown and ask, are they more concerned with image than sound?

Now, that could just be me being an embittered cynic, so back to the gig. 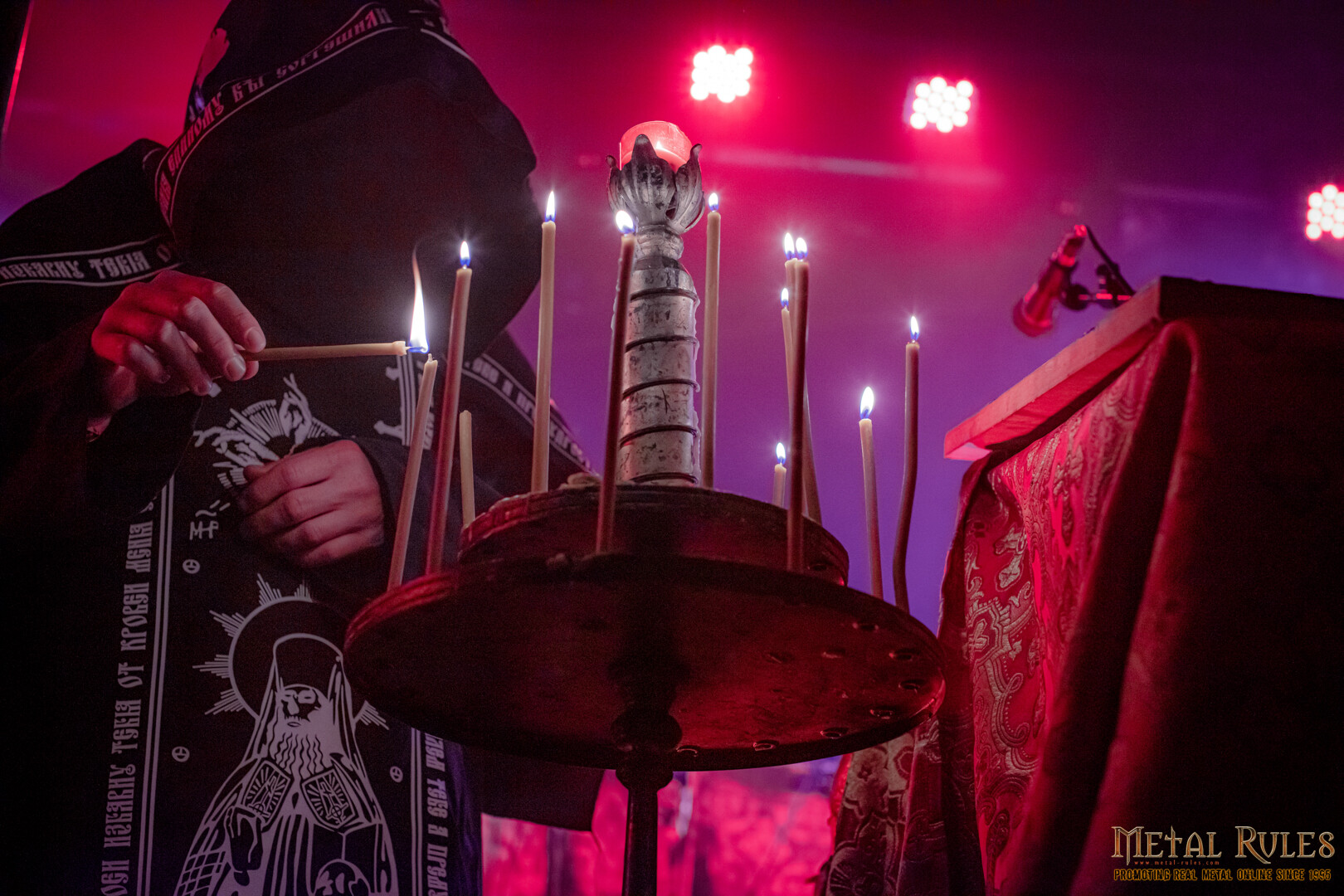 Once the stage had been set up and all seven (or eight) members had taken their places the show began, one delivered in a style of an orthodox service which reminded me of my childhood days going to Greek Orthodox ceremonies with my parents.

Even though Batushka’s wailing and precision pieces howled into the audience like a series of spirits summoned from the grave, I was not feeling what everyone else was. Nothing seemed to jump out at me, and the fact that the drummer was shielded behind decorative tapestry left me a little annoyed I couldn’t see my favourite instrument being played.

I’ll give Batushka credit for putting such a strong effort into their image and performance, with the instruments being played well and the crowd moshing several times, making one hell of a pit, though my taste in Polish black metal sadly doesn’t involve these blokes from Bialystok.

I think this sort of venue wasn’t ideal for a band whose stage presence is more suited to an arena or festival, as I’d seen them before at Brutal Assault 2019 where I remember finding them a tad more enjoyable. 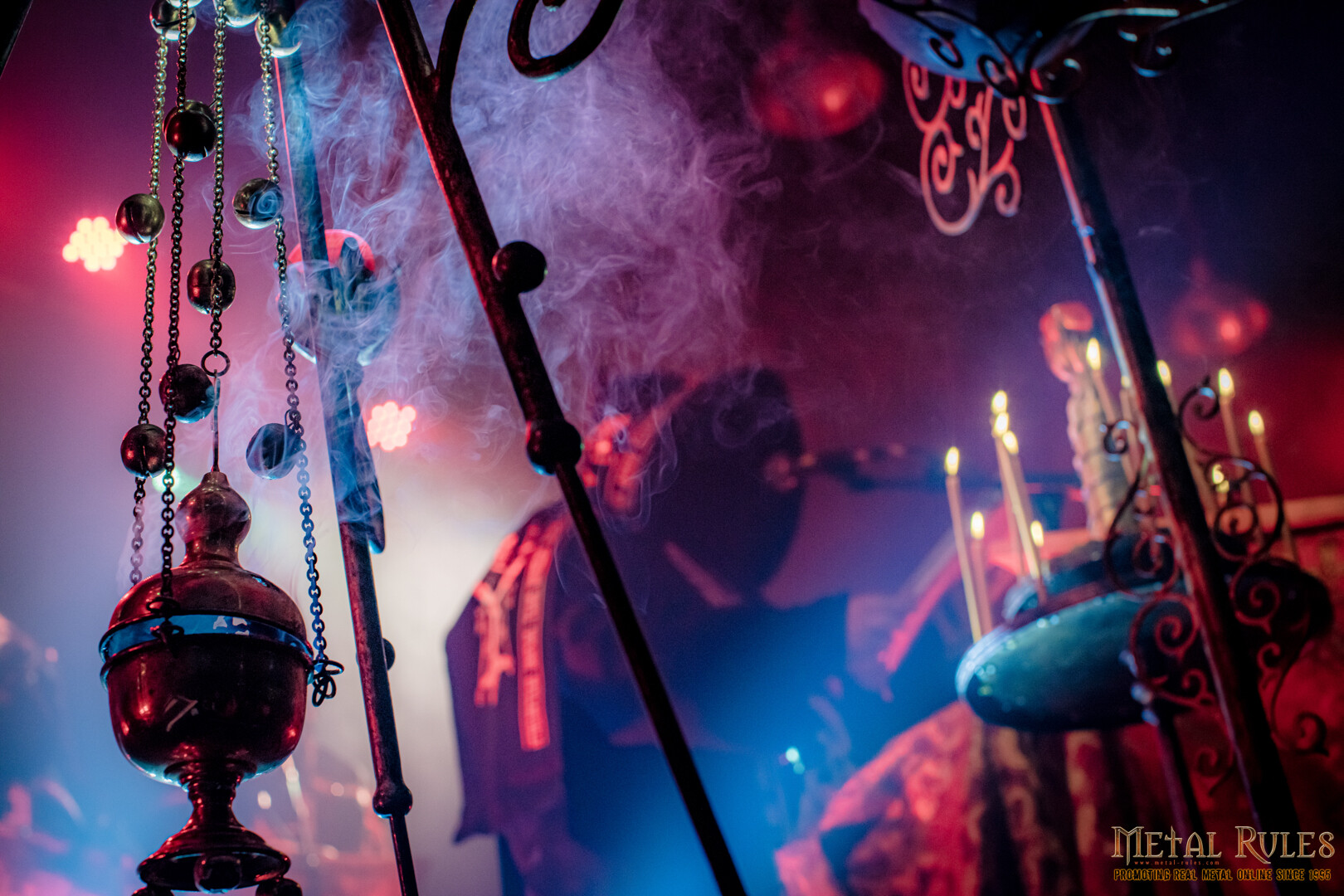 This was another performance that had the crowd on their side but sadly not me, as it should have been Belphegor headlining this one.

But as I left the venue that night with a happy crowd I was pleased to have witnessed a multi-cultural line-up as such a thing appears harder to come by these days given recent social problems.

One fun night all around – and please make another studio album soon, Belphegor!