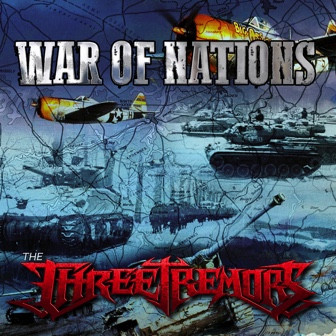 This song is a tale of the famous Battle of the Bulge which would be the final decisive battle in World War 2 leading to the eventual Allied victory.

Tim said “Every good metal album needs a song like this I think.  It has a great hook in the chorus and is a fast mover.”

Sean said  “I am a big World War 2 history buff and I love writing songs that educate a little bit and tell the story at the same time.  I knew I wanted a song from this era on the record and I had not covered the Battle of the Bulge yet so it was time.  Casey “The Sentinel” Trask wrote some sweet riffs and this one came together really quick.  I love his lead section in it too might be one of my favorite leads on the record.”

Harry added.  “I had a great time recording this one.  I think this song really suited my style of vocals well and I think that is why Sean featured me in this one a bit more.  It reminded me of Jag Panzer’s The Mission song (The Guns of Navarone).”

This is one of only 3 songs to hit the streaming platforms as they have made it their policy to only release tracks that are music videos to such services as Spotify and focus their efforts on the physical product.  Their battle cry is “Support Heavy Metal and buy a piece of the physical product!”

The album can be purchased here www.thethreetremors.com/site/store.html along with a variety of bundle packages and merchandise options.

THE THREE TREMORS are currently out on tour in North America try to catch them on their remaining dates and shows.