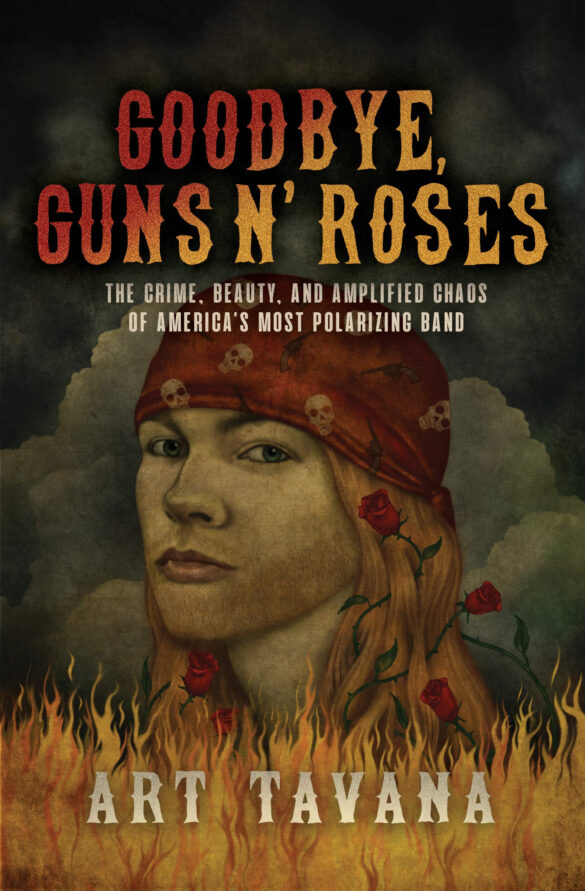 There are many, many books about Guns ‘N Roses and it makes sense because they are a unique and interesting band.  When I heard there was yet another book about Guns n’ Roses coming onto the market I was curious about the angle that they author might take.  I mean, what more could possibly be said about the band?

To get the housekeeping out of the way, GOODBYE GUNS N’ ROSES is a standard hard cover, with not many frills.  There are no photos, no foreword and the dust jacket is an artists rendering of Axl Rose. After a very brief, but important prologue that explains the overall concept of the book, author Art Tavana launches into what must be the world’s biggest love/hate letter to the band.

Tavana is an American pop culture journalist who has contributed to many of the cool, trendy type publications, Vice, Spin, Pitchfork so that might give an idea of his mindset. etc. I’m not familiar with his work but I like it so far. Tavana employs of verbal salad/word barf style of writing.  It is clear that the band means a lot to him. 250+ pages of freestyle writing worth!  He takes us on a wild journey from the early days of Axl getting off the Greyhound bus in L.A. through to bloated and indulgent reunion tours.

This is not a mere history, that has been, as I alluded to earlier, been done many many times. His take is unique and interesting. It is like he sat done one day and wrote done everything he likes, and doesn’t like, about the band since day one. He avoids common traps never becoming the story, we learn virtually nothing about the author, other than he is a pop culture junkie. We do learn of his epic torrid, on again off again love-affair with the band that has lasted decades.  In terms of facts and figures he is dead on, quotes, trivia, dates etc although the G n’R story is not really a closed book.  None of the factual stuff was especially new but is presented with such enthusiasm that it felt new again.

As a Canadian reader it is very clear he has been fully immersed in US pop culture his entire life. I found it hard to follow at times, there are countless references to things, to be frank I just did not know who they are or had never heard of; Authors I have not read, movies I haven’t seen, and so on.  For example, he drops obscure quotes from 80’s action movies like Robocop (he must really like Robocop, he mentions it about five times) and references movie like Apocalyse Now many, many times. I just did not get many of his cultural references because I had no frame of reference. That is not a criticism, I just found it interesting to read.  Charles Manson, Vietnam, Reagan, Tom Cruise and many more uniquely American cultural touchstones get woven into the narrative often leaving me in the dust and scratching my head. I guess I should watch Days Of Thunder (a race car movie starring Tom Cruise) one day to figure out what the hell Tavana was talking about since he referenced the film a dozen times.  I probably never will, the moment is gone.  It is like when someone tells a joke that you don’t get and they have to explain it… it’s not funny anymore. I had that feeling many times while reading this book.

Another example, Guns n’ Roses and their relationship with MTV factors very heavily into his narrative.  Having never seen MTV (the American music channel) all the references to what various hosts wore when interviewing the band were lost on me. I could not pick Kurt Loder out of a police line-up if my life depended on it, but that is not Tavana’s fault at all but this book is very tailored to people who grew up in the US in the 80’s watching MTV, CNN and Hollywood action movies.

The wordy sub-title of ‘The Crime, Beauty And Amplified Chaos of America’s most Polarizing Band’, really struck me.  ‘polarizing’?   That is not a word I’d use to describe the band.  Admittedly, I run in my own Hard Rock / Heavy Metal circles my whole life and generally eschew pop culture but I don’t think I’ve EVER met or heard, not once, in my entire life someone who doesn’t like Guns ‘N Roses.  Polarizing to who?  That seems so strange to me.  They are one of the world’s biggest, longest running, most successful Hard Rock bands of all time. Either you like them or not, it doesn’t seem like there is this vocal faction of Hard Rock fans who don’t like the band. I’m not a die-hard supporter or detractor myself I had a hard time wrapping my head around the idea of polarizing.

Despite all that I really enjoyed Tavana’s stream of consciousness style. It’s like peering into the cracked cranium of some obsessed guy and not understanding what you use inside but still finding it very appealing and attractive. His writing style is fast and furious, tons of great word-play and wonderful metaphors, again which even If I didn’t fully ‘get’ I know meant something clever.  This was a really fun book to read. Sometimes to just have to go along for the ride, even if you don’t understand why. This book was way too cool for me and just out of my league.

The world’s ‘most dangerous band’ now in 2021 is about as dangerous as my daughter’s teddy bear tea-set.  It is good to read this and look back and revisit the days when the band meant something to so many.  Tavana has crafted (as he says in his prologue)  “…a fitting substitute for an epilogue” (p. IX).  He succeeds admirably in this regard, unless the band does another noteworthy album then it all goes out the window.  Until then, (If and when) with GOODBYE GUNS N’ ROSES Tavana got the last word and I don’t mind at all.