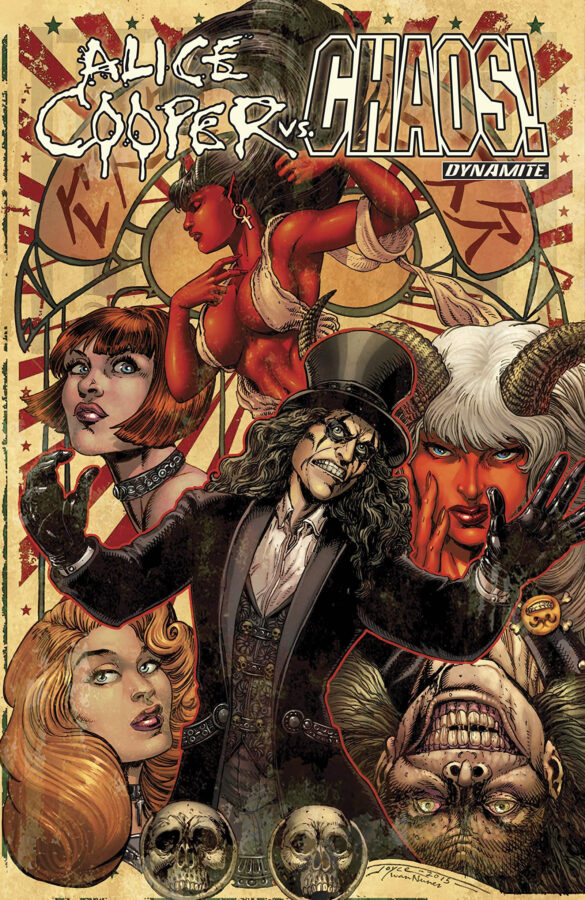 Alice Cooper has been a central figure in a number of comics over the years. It is a natural fit.   If you are curious I have reviewed three previous comics that featured Alice Cooper, here on Metal-Rules.com.

Back in 2014 the Dynamite Publishing form published a six-issue mini-series featuring Alice.  It must have been successful because they back to the well a couple of years later in 2016 and did another six-issue mini-series.   I recently picked up a collection of all six issues.

This is a cross-over comic.  Many moons ago there was a small start-up comic company called Chaos comics.  They ran for about 10 years before going out of business. The rights to their various characters such as Purgatori and Evil Ernie changed hands a few times until they ended up in the dynamite Stable.  Some clever person decided to bring Alice Cooper into the Chaos world…or vice-versa.   It is actually a good fit because much of the Chaos publications were based in dark horror and the company was Metal-friendly working with Megadeth, Iced Earth and a lesser-known band called Doomsday.

This softcover collection features all six books and has a number of cover art variants. There is not too much in the way of bonus features, just a few ads.   I’m going to adhere of my long-standing policy of not revealing too much about the plot of the series.  It is quite similar to the last mini-series created by Dynamite where Alice Cooper and Vincent Furnier, the rocker who plays the Alice Cooper character, are distinct entities.   There is a psychological battle of wills as various super-natural denizens of the dark move back and forth between reality and the realms of nightmares.  Fans of the old Chaos characters will sure get a kick out of the old gang.  The storyline is mature but not explicitly graphic or sexual in nature.

The art is big and bold, dynamic and interesting. The dialogue is decent as well, with a few scattered references to Alice cooper lyrics. It is a fun book and adds a little bit more to the enduring legacy of Cooper.  I’m probably rating this a bit higher than necessary for a comic book but for fans of Alice, myself included this is a treat.