Sarke is a band whose name does not get tossed around in conversation about extreme metal, and that should change. This band has been around since 2008 and is the namesake of it’s founder Thomas “Sarke” Berglie. He is the currently the drummer for both Khold and Tulus. But what gives this band the little notoriety it does receive is due to the vocalist. It only takes a second to realize those vocals are none other than Ted Arvid “Nocturno Culto” Skjellum. I first became aware of them in 2011 with the release of their sophomore full length, OLDARHIAN. They are categorized as blackened thrash metal but one listen was all it took to realize these guys were much, much more. Now comes their seventh full length album, ALLSIGHR, and it seems they are still shedding there original blackened thrash roots and is going in a more progressive direction not unlike modern Enslaved and the results are astounding.

One thing I did notice about this album was the atmosphere. The production and the songwriting are much more intricate and more progressive. The album opener, “Bleak Reflections” actually opens like an Enslaved song; blasting right at you but with riffs that create a different sound than just cold black metal. The use of the keys also play a huge part in the overall atmosphere on this album. Black and roll could even be a accurate here. The keyboards are very retro 70s sounding but that is not the only element that reaches back to metal’s roots. The title track starts very atmospheric with some almost spoken words where a slow but effective riff works its way in. This song is huge in its delivery; it does not get very fast but instead just rocks along with some great riffs and an interesting feel coming from the keys. Then following that is the first single from the album, “Beheading of the Circus Director.” This song represents the album as a whole with its infectious riffs, thoughtfully thought out and well placed solos, and the use of the keyboards to go into that proto-metal Uriah Heep sound.

“Through the Thorns” starts off in an almost jazzy direction with the lead riff giving it that classic feel before the driving riff takes it to another level. Once again, it’s hard to peg this band to one genre. They do a superb job of adding elements to their songs that you were not suspecting. This is not your verse/chorus band. “The Reverberation of the Lost” is the perfect example. The song is another one that has that modern Enslaved feel to get it going but then it goes in all kinds of directions. I think that the reason some of the tempos of the songs remind me so much of Enslaved is that the drummer here is none other than Cato Bekkevold, Enslaved’s former drummer. The main tempo and that driving riff is accompanied by some of the coolest 70s era organ, sounding almost as if Jon Lord rose up for that solo before the song goes into completely direction…brilliant! Then you have the closer, “Imprisoned,” which has this really cool riff with some old school keys hovering there through most of the song.

I’ve enjoyed everything I have heard from this band but was not prepared for this. All that they have done up until now has been building to this. ALLSIGHR is one of the most unique and interesting albums to come out in a while. The tags of blackened thrash or whatever box someone tries to fit them into just does not do this band justice. There is some serious talent on display here and sadly this band does not get the recognition it deserves. If you love 70s progressive rock and 80s speed metal with a little black metal to top it off, then you should grab this. 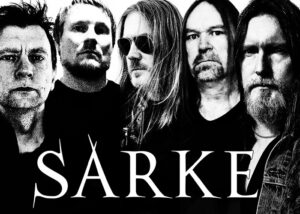