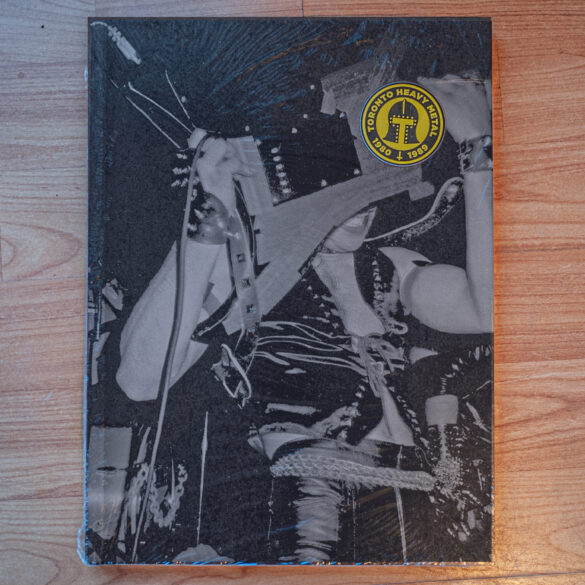 It seems like I have been waiting for this book for an eternity.  I’d have to check but I think this book was first announced back in early 2019.  I have a semi-personal connection to this book, which I will explain in a moment, so my anticipation was quite high and it was certainly worth the wait.

There are many books that discuss, analyze and document various Metal scenes from around the world. I’ve got books on Swedish Death Metal, Finnish Black Metal, the NWOBHM, Australian Metal and more.  Closer to my home in Canada, there are only a couple of books about Canadian Metal leaving the national metallic history vastly underrepresented.  EVE OF DARKNESS goes a long way toward rectifying that situation.

Those other books I’ve mentioned have a very broad, national perspective. EVE OF DARKNESS with a sub-title of  ‘Toronto Heavy Metal 1980-1989’  may be the very first ‘city-specific’ book about Metal. Ever.  Another recently published ‘geographically-specific’ book, RUSTED METAL,  focuses on the Pacific Northwest. Even that book covers several cities across two nations.  Accordingly, EVE OF DARKNESS is quite a milestone in Metal publishing, one that is  unique and interesting.

Think about it, as the subtitle tells us this book focuses on just ten years, in just one city, in a nation that, in terms of Metal is strong but not a global leader.  That is is an incredibly narrow focus for a book.  If you didn’t live in Toronto you might not care about demos of obscure, defunct local bands that never made it, or the sight lines in some random club that Anvil played in 30 years ago.

This whole preamble all ties back into my personal connection.  I lived in Toronto in the 1980’s so this is like a High School yearbook for me!  This is a big trip down memory lane hence my above average sense of anticipation.

EVE OF DARKNESS is a gorgeous, world-class publication. It is a large coffee-table book printed in full colour on high quality paper. It is big bomber too,  over 300 pages!   There is also an ultimate collectors edition which might be already sold out by the time you read this. It comes with all sorts of memorabilia. Even the regular edition is lush and gorgeous with kind of a unique red & black design and colour scheme.

Technically, this is a combination of oral history and biography. The story of Toronto Metal is told through dozens (hundreds?) of interviews with the frontline participants, resulting in probably over 1000 quotes.  The book is organized into small digestible chunks in chronological order.  Within the timeframe it is further broken down into bands, clubs, media, notable concerts etc. There is insightful analysis and overview of each section then the people who were there get to tell the story.

You could read it cover to cover front to back but it’s not really designed  that way. There is just too much information to process!  What makes EVE OF DARKNESS so appealing is the visual component.  Instead of fans just talking about, for example, when Mercyful Fate played in Toronto in 1984 at Larry’s Hideaway,  there are pictures!  Lots of them!  It really makes the story come alive.  It is like the ultimate professionally produced scrapbook.  There are images of concerts, flyers, magazines, tickets, demos, clubs, fans, bands and so much more.

If there any criticisms they are very minor.  The authors choose to use a fairly narrow definition of ’Metal’.  There is nothing wrong with that and many of the bands that fell more into punk or melodic Metal, only got honourable mentions. There are any number of bands that didn’t get as much attention, it is evident the authors care less about Brighton Rock, Harem Scarem and Killer Dwarfs and care more about Sacrifice, Slaughter and Razor.  However, they are fair and it is kinda cool that bands like Hateful Snake that would have been lost to history get more attention than Helix.

The book is heavily nostalgic as many oral histories tend to be.  The enthusiasm is undeniable.  The participants (band members, managers, agents, club-owners, journalists, DJ’s, industry people and crazy fans) are reminiscing about the times of their lives.  The parties, the girls, the booze, the drugs, the bars and of course the music!  However all the talk about seeing ‘Band X at Club Y’ might not be as interesting to someone who was not there.   However, I was there and saw ‘Band X at Club Y’ so I found it fascinating and fun.

However, from a more neutral perspective I can recognize, for example, that when the legendary W.A.S.P. , Metallica and Armored Saint tour played in Cleveland or Milwaukee, those shows are just as legendary and important to those fans in those local scenes, as when that tour hit Toronto.  The key difference is that the Toronto boys got their shit together and wrote an awesome book about it.  It’s easy sit around with your friends, drinking beer reminiscing and saying, ‘Remember that awesome gig we saw in the 80’s?’  It’s much harder to put it down on paper so this book is quite an accomplishment in itself.   Who knows?  Maybe the success and cool-factor of EVE OF DARKNESS will inspire other people to write their own ‘city-specific’ books.

I’ve grown extremely fond of this recent surge in Metal publications that are heartfelt, niche type books that focus on very specific parts of a Metal scene, genre or region.   They are important historical documents made by true fans for true fans.   Even if I didn’t have the nostalgia factor,  I can’t think of any better reason to endorse and recommend EVE OF DARKNESS.