“Notre-Dame-de-l’Enfer” is the third release from the band following “La Foi, La Loi, La Croix”(2019) and “Le Métal Est Notre Langue” (2018). It is the band’s attempt to make a metal opera about French Canadian stories, which will shine some light on francophone folklore presented in an energetic and catchy fashion.

The track “La Cage de Fer” is inspired by the Québécois folklore of Marie-Josepht Corriveau. A woman who lived in New France during the 18th century and was sentenced to death by a British court-martial for the murder of her second husband along with speculation of witchcraft. She was hanged for her crime along with her body hanged in chains.

“This is another really important story that is part of French Canadian folklore,” says vocalist/guitarist Renaud Baril. “This song is really slower and darker than the rest of the album with mellow verses and a more aggressive chorus. It has a more of a ‘doom metal’ feeling.”

“La Cage de Fer” can be heard via its lyric video – youtu.be/SzBHV2BxlcM

For “Notre-Dame-de-l’Enfer”, Thrash La Reine worked closely with producer Francis Perron (Voivod – The Wake) to create an album of 13 tracks: 9 full songs and 4 instrumental interludes, taking the band on a hard turn from their classic metal/thrash roots and into folk metal territory. Overall, the concept album will connect with many local Quebec fans, but the band’s goal is to also expose French Canadian culture to more metalheads around the globe.

“‘Notre-Dame-de-l’Enfer’ is an album about French Canadian folklore. Most of these folk tales occur at night, in the cold countryside of the province of Quebec. We made an album that reflects this cold and dark atmosphere. For example, we used down-tuned guitars and bass to create a sonic atmosphere that seems to come from the depths of the Appalachian Mountains. Many of these stories happened in the 18th century during festivities; we also tried to capture the festive aspect of these legends, including a lot of gang vocals. We incorporated some traditional instruments to this album like mandoline, acoustic guitar, strings, accordion, and cowbell! The kind of singing and harmonies we use on this album are also reminiscent of traditional chants.

These French Canadian folk tales are all about ghosts, witches, sins, and the devil himself! It fits really well with the metal imagery! The album touches on a lot of different styles: fast, slow, sad, happy songs with either coarse or clean vocals. This album captures different colours and emotions.

As the themes of the album are really similar, we did a conceptual album with an epic introduction and some transitions between the songs.”

Thrash La Reine is recommended for fans of Alestorm, Powerwolf, and King Diamond. 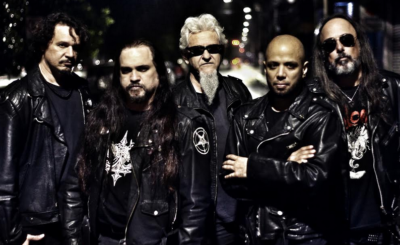