Brazilian multi-instrumentalist Lucas Barbosa will be releasing his studio project Terra and its debut album “Hypercube” on November 19th via Rockshots Records.

Today, the third single “Sound of Rain” is revealed with a music video via Rockshots Records’ YouTube channel.

“Sound Of Rain is a soundtrack for a resting session at the end of a long and tiring journey or just an exhausting day. In every journey, there is a moment when we sit down, take a deep breath and try to make sense of all the learnings, mistakes and lessons we collect along the way. It is part of the learning process and it feeds the creative and constructive loops of any thought or idea we might be forming. Our subconscious does this process automatically during our dreams when we sleep. So, Sound Of Rain talks about owning this process, about Lucid Dreaming, by the sound of pouring water, in a comfortable and warm environment, where we lead the process of making sense of all what we learned so far in our life journeys, what is yet to discover and what path should we take to get to the final goal. In this case, the formation, comprehension and harvesting of the perfect Idea, the one that represents the best version of ourselves, a Hypercube on the top of the mountain. In order to transmit this message, elements of percussion, finger-style classical guitar, exploring harmonic features of the instrument, and organic rhythmics were used, over smooth by dynamic harmonic progression were implemented”

Terra brings a combination of musical, audiovisual and artistic experience that translates the personality and ideas of Brazilian composer and multi-instrumentalist Lucas Barbosa, resulting in a musical journey for those who love music and exploration of the new.

“The idea of Terra was always there, I believe. I have been composing and writing songs since I was 15. I needed a platform to structure and back these songs. This platform should allow me to combine some passions of mine: folk and metal music, traveling and photography. When I was around 20, I came up with the concept of TERRA, a project that would combine all the influences that made the musician and the person I am, in an organic manner, which would allow me to tell my stories of discoveries and exploration, including my experiences traveling through Brazil and throughout the world. It took about 10 years to actually find the environment and opportunity to bring this idea to life by recording Hypercube and kick-starting this journey.” comments Barbosa.

Terra’s first record is the outcome of the combination of elements put together to tell a story of a journey of growth and self-discovery, that frankly, could be the tale of every human being at some point in their lives. Ten songs are there to paint a picture of the artist’s personality and explore each step of the way with the respective deserved depth. Although heavy metal is the glue that unites all the musical nuances presented on this album, “Hypercube” does not shy away from a rich range of influences such as American Bluegrass, Country Music, Classic Rock, Classical Music, Western Folk, traditional Brazilian, Caipira and Sertanejo music along with passages of Samba, Capoeira, Bossa Nova and many others to convey its message. Lucas Barbosa was responsible for playing almost all instruments, including rhythm and lead guitars in all their forms (electric, classical, 6 string, 12 string), bass, Brazilian guitar (or Viola Caipira), Andean guitar (or Charango), Pan flute (Andean flute), harmonica, percussions and piano, in addition to performing all of the vocals in the songs. 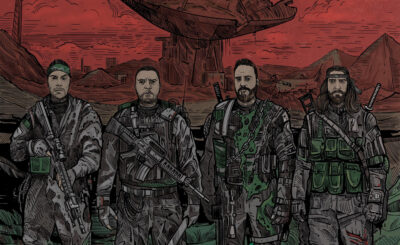