The Finnish melo death metallers Bloodred Hourglass will release the fifth album titled YOUR HIGHNESS on the German label Out Of Line.  The album is another great piece of melodic and catchy songs as well as an aggressive approach. Bloodred Hourglass is one of the leading names of the melodic death metal genre. Strong albums one after another prove, BRHG will take the step into the big league. All of you, looking for and wanting the melodic metal, get a hold of YOUR HIGHNESS.

Interview and livepics by Arto Lehtinen

Good day BloodRed HourGlass, how’s it going in the band now in the post-pandemic era ?!

Hey. It’s going good, thanks for asking. Busy times, when the album release is closing in, together with the production of our biggest live show so far – here in Black Box Mikkeli 2021.

THE 5th BRHG OPUS YOUR HIGHNESS

The last time we talked, when the 4th album titled GODSEND came out in 2019. There is just a two-year gap between GODSEND and the newest 5th album 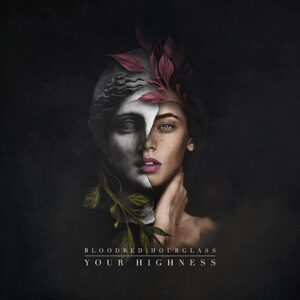 YOUR HIGHNESS. Presumably, you didn’t spend and have that much downtime during this era of plaque, just working on new songs for the next album?

When it came obvious that things will go south with the pandemic, we pretty much instantly made the decision to use the time as efficiently as possible, and it was clear from the start that it’s time to overcome the challenge and create the next album. So yes, definitely no time wasted waiting for the world to heal.

Could you shed some light about the writing process and getting the material ready and to the point of recording the stuff and finally letting the label OUT OF LINE take care of the promotion etc ?!

It was pretty much the basic route for us where one of the guys introduces a demo for the others and we start to work it from there. This time everyone was just way more involved from the very beginning, and we exchanged ideas more deeply right from more early stages of pre-production. Out of Line was working hard with Heal and Godsend earlier so we felt they are a valuable partner for us in the future as well. Anyways, we think that our co-operation with them has become deeper.

Were the writing and composing process easy and mellow from the beginning to the end, or did you face any obstacle or lack of inspiration under the process of the creation ?!

When our previous songwriter Antti quit the band fairly soon after GODSEND was released, we faced a completely new challenge. This soon turned out to be nothing we would not be able to overcome as a group and things just fell in place really fast. The inspiration was there all the time when you had all the time in the world to think about what you want to do and say on those songs. The studio session was pretty painless, but that seems to be the case with SoundSpiral Audio and Juho Räihä’s professionalism, record after another.

I am keen to know if every member of the band came up with new ideas and contributed to the songwriting process on this new album. Or did each of you 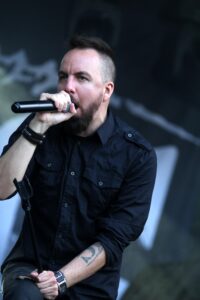 work and create the ideas on your own and finally changed files thru the net between each guy ?! How did/do you usually work ?!

Everyone contributed more than ever, that’s for sure. All of a sudden, instead of one songwriter, we had four of them, and there are songs from each one on the album. A lot of files flew over the air and this truly felt like a group effort. Eero also joined in the early stages of the pre-production and turned out to contribute so much we simply felt he deserves to be a permanent member of the band.

We brought our sound and vision to 2021 with this album. This is us pretty much reborn, yet not forgetting our own signature sound. We feel we’ve managed to bring in such diversity you have not heard from us ever before. We also geared up when it comes to the production, and you can definitely hear that.

Have you been pleased with an accomplishment on the previous BRHG releases and was it difficult to raise the bar for the fifth album somehow ?!

We can mostly stand behind what we’ve done so far, maybe excluding some vibes of our debut album, to be completely honest here. GODSEND set the bar fairly high and we had succeeded to take steps forward with every album, so it was clear we need a lot from this record to reach a successful continuity. In our books, we took the required steps and what we have is next level again, but this time with even more fresh touch compared to the earlier developments.

Do you think it is important for you and the band to stay true and loyal to the visions, approaches, and sounds of Bloodred HourGlass – Do/did you try to find compromises or explore new musical ideas and territories for the BRHG music ?!

You never want to stick in a place to keep yourself inspired, which is a really important factor. Especially on this record, we completely wanted to screw all the boundaries. Most of the influences for this album were really, really non-metal, and this was the key element to be able to widen our spectrum with YOUR HIGHNESS.

I can’t help asking if YOUR HIGHNESS is some kind of concept album or what are the lyrics all about !? 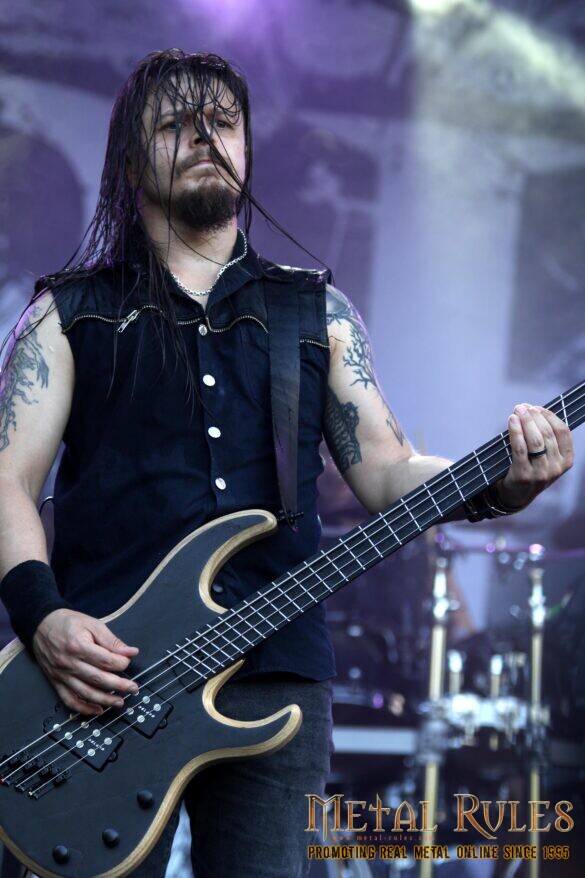 It’s lost changes of life and love, and YOUR HIGHNESS is our bow to the female counterparts of our lives – in the here and now, as well as back where our lives only crossed more or less temporarily. It’s easily the most personal album lyrically we have ever delivered and it feels more right than ever with this approach as well. It’s honest and there is just so much more emotion than before.

The album contains eleven songs – Did you write more songs that didn’t make the record, but may be released as a digital EP or bonus material for a special release ?!

All of the songs we recorded in the studio will get published, as there is a deluxe edition with its own CD that includes 3 bonus tracks. The vinyl release also has all the 14 tracks included. Those are tracks we feel did not fit the album concept well enough so we decided to exclude them from the actual release.

Where did you record the album and with whom you worked ?!

We worked with the same combo as we did on Godsend. Juho Räihä from SoundSpiral Audio did the recording, and Henrik Udd from Sweden mixed and mastered the album. The drums were recorded in D-Studio and the rest of the instruments and vocals on a cottage in the middle of absolutely nowhere here in Finland.

What are some of your personal expectations regarding this new album?

Represent the new wave of modern melodic metal, reach as many new listeners as possible, and be a gateway into metal music for those who may have not experienced it before.

Bloodred HourGlass has shot several videos over the years. Do you view these videos to help you to gain more attention as well as recognition? Have you gained more following via these videos ?!

Let’s just say that everything helps. Since there’s been quite a lot of time to produce this type of content as well, we took the extra effort here.

Usually it’s just an idea from someone that everyone gets excited about, and that will then start to develop into something more. We’ve never had any fancy budgets available here, obviously. Concerning the latest videos from our previous albums, it has been more or less like a divided responsibility between us and Out of Line when talking about the costs. But every euro counts and we have to be thankful, that we have succeeded to offer something else than just standard lyric videos.

I can’t help asking which BHRG videos are your fave ones and how come ?!

Really tough to say. “Leaves” video will come out at the same time as the album, hopefully that one will be the winner here. “Kings & Queens” also turned out to become a pretty cool video.

CREATING SETLISTS AND OTHER BANDS

When the previous album GODSEND was released in 2019 and you were about to conquer the world. But the whole pandemic broke out in early 2020, presumably all the touring plans went up in smoke. How did you cope with all these changes and restrictions, when did you realize this may take a little bit 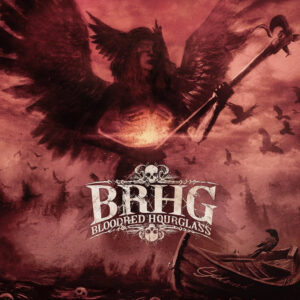 longer than thought in the first place ?!

Well there’s not much you can do. As mentioned, we just tried to use the time as efficiently as possible and decided to put all our focus into the new album. This was a huge mental escape playground at the same time when everything was completely on halt.

You basically have two “new” albums to perform for the audience. Do you think it is going to be a hard task or a nightmare to create setlists?

Our album release show currently has 19 songs in the setlist and that’s a kinda easy one, as you can include all the songs you really enjoy playing live – as well as the ones that people are most eager to hear. But the first time we face a situation with really a short setlist it will surely be a nightmare to pick the ones to deserve the spot. Of course you can always include all the variety from one show to another, so in the guess we’ll live.

The line-up of BRHG has been more or less stable, except for the guitarist are changed. For example, the current guitarist Eero Silvonen has been part of the line-up during this year. As a matter of fact, could you explain a little bit about these changes and the status of guitarists?

Antti leaving was obviously the biggest change we’ve had, but other than that the prior members simply didn’t have the dedication it takes to be able to reach it where we are 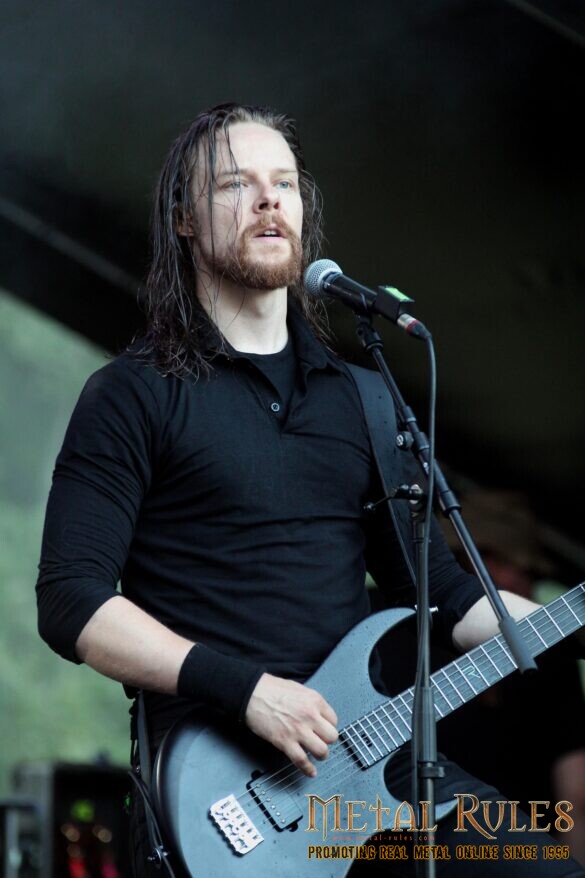 now. There is no drama, it’s just options and choices and we respect everyone’s decision of course. It’s always better to understand to step away if you feel you do not belong into something such time-consuming like what we do. When it comes to status, all six of us are official members of the band.

As far as I know, some of the members of BHRG play or helps other bands, right ?! Does it bring any unexpected schedule conflict or is BHRG however priority for all of you?!

Yes, Lauri plays bass in Wolfheart and Joni guitar in MyGrain. There are some double duties occasionally, but so far we have managed fairly well. There are now three guitar players in the band so we can also play one short if required. The songs are after all composed for two guitars only, and the third one used live is for the extra wall of sound to make it huge.

Before concluding the interview, could you name five METAL albums having had a major impact on you?

Check out YOUR HIGHNESS coming out on October 22nd. Truly looking forward to getting back on stage for all of you out there. Thanks for reading and see you soon! Cheers.