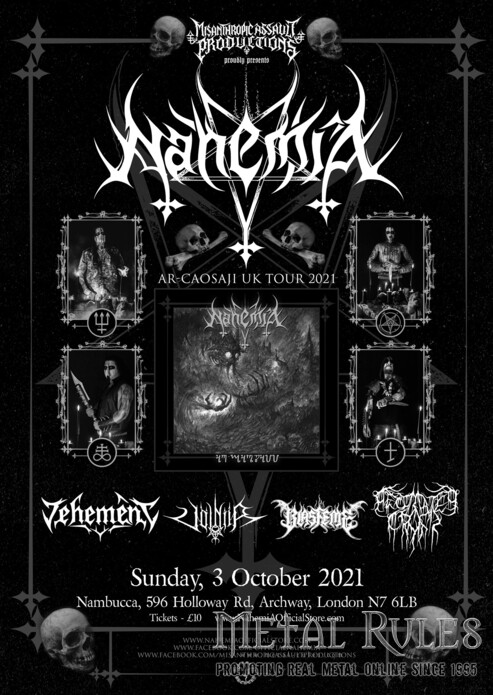 They say live music is returning after a tumultuous year and a half, and the world of black metal is no exception as was seen on Sunday 3rd October at Nambucca.

Nahemia, the Polish-English group who had begun their UK tour to promote their 2020 album “Ar-Caosaji” had come to reign a good deal of terror on the capital, and they were not alone, for a good line-up of Britain’s best black metal groups were armed and ready to wage their own wars on the crowd.

The night began with a good crowd packing out the Holloway Road venue to greet Decimated Cross, the first to begin the audible onslaught.

When I got to Nambucca, DC had begun their set and they were not letting anything get in their way. The band; all the way from Staffordshire, raged through a good deal of memorable BM tunes to enrage the London scene.

Said crowd remained silent yet devoted to the screeching roars brought about by DC, who gave some notable performances.

I’d say there was much potential for these lads, though I felt vocals could have been worked on, as the mics and PA system did not translate them well.

Up next was Blasfeme, promoting their recent EP “Fuck Your Starving Planet.” This duo was the epitome of what I’d call “controlled chaos”.

Whilst they had all the clichés of black metal going on like corpse paint and shrieked vocals from vocalist Moord, plus excellent machine-gun style drums from drummer Striga Hell, Blasfeme enticed the audience in a manner that would put many veteran BM bands to shame.

Yet at the same time, I was looking at this band and thinking “they shouldn’t be this good”! I will say that I did have my expectations which Blasfeme did not entirely fit but they wowed me in a chaotic manner.

By chaotic, I mean they were a band I did not expect to enjoy but they were far more impressive than the opening acts and I still think about them now.

Very impressive in the most chaotic of ways, Blasfeme…keep making records!

By now the venue had begun to swell in attendance with larger audiences swathing through the doors to have a good taste of fine British black metal. Everyone seemed to be out and about for a good weekend as if the pandemic had never occurred, which made my loyalty in the metal scene rise a tad.

Said loyalty then raised itself even higher with how well received the next band, Volniir, were treated.

Hailing from Yorkshire, Volniir arrived in wake of their latest album, “All Hope Abandon,” which I should note is one of the best UKBM releases I’ve heard this year.

Volniir is a band that pulls no punches as it was a roller coaster thrill ride into absolute misanthropy from the moment the first note tore through the amps. Vocalist Tubal-Qayin had the crowd in a proverbial headlock with his dangerous charisma setting the scene for a show of evil and absolute darkness.

This darkness reigned like a pool of molten lava over the crowd who applauded and shouted in unison with the Yorkshire group as they raced and tore through tune after tune covering topics of horror, nihilism and the ever-present end of all things.

What made me feel good about watching this band was how strong they came across in terms of rehearsal – this was a band that meant business.

Volniir ended the show with the right level of applause and cheers they deserved, and I look forward to seeing them again very soon.

By this moment, the whole of the venue was writhing with happy metalheads ready for whatever oblivion lay in the strings, percussion, and notes on offer from the next band.

This time it was the turn of the south-east coast with Vehement, all the way from Eastbourne and having left their fair share of marks on the UKBM scene in their 16-year existence.

Whilst they haven’t released any new material in over four years, there were some new and memorable tunes included in the band’s setlist, making it clear they haven’t mellowed at all in the time many a band has had to stay away from the road.

Vehement began blasting into a finely crafted barrage of BM bombardments, giving the crowd more and more ammunition for the excitement and wildness that raged from the hearts and minds of myself and those around me.

It is good to have veteran bands like Vehement continue to craft excellent tunes with the speed, agility and depth one can expect from a band that have been around long enough to know their style and substance.

Substantial chaos and desolation are how I’d describe Vehement’s set and it was simply great to have ex-member, Tubal-Qayin join them on stage for their final song. Excellence in the finest audible form.

It now felt as though the night had reached its peak as it was now time for the headliners, despite them coming on a little later than billed.

Nahemia, having begun their career in Poland many years ago and now residing in London fuelling the burgeoning BM scene took to the stage which was now decked out in pigs’ heads on spikes – a tad reminiscent of Mayhem’s early days.

Once again, the strategy of this band’s attack on the ever-hungry crowd was the same. They fired a strong hail of percussion into the ears of the eager fans and sliced into them with precision strings and ferocious melodies that offered a diverse range of talent in their work.

It is true that Nahemia had the crowd on their side from the very beginning, as everyone in the room was fixated on these four angry and evil musicians clad in leather and paint, belting out songs about war, hatred, outright misery, and blasphemous philosophies that would have any religious person crying uncontrollably.

Loyalty burned brightly from the crowd, as bright as the flames the band had burning on stage alongside their putrid displays, and I was certainly given the impression that Nahemia had a lot of keen followers in London and soon they’ll be headlining more shows – shows bigger and reputable than this one.

Overall, the group showcased their undying talent for the misanthropic and the blasphemous, making me and my friends leave Nambucca that night knowing UKBM is still strong and angry however much damage a global pandemic can do to it.

I hope to be back at Nambucca and other venues soon watching bands as impressive as the ones who gave it all they had this night.