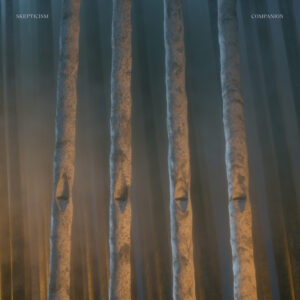 Like a sad, sad wine, Finland’s Skepticism seems to only get better with age.

Though the band’s approach to funeral doom hasn’t changed much since their 1995 STORMCROWFLEET debut, it’s the way that they continue to evolve those blueprints that makes each record feel like a true event. Their recently released COMPANION is a fitting testimony to that statement. It’s every bit as sonically depressing as you could hope for, full of drawn out melodic passages and beastly vocals, but the there’s a fresh energy across the album that fully makes it worth the six year wait for new tunes.

Whether it’s mixing up the traditional pipe organ drone with more complex and keyboard elements or injecting some actual moments of hope into the melodies, COMPANION is a much more dynamic album than its predecessors. Album opener and lead single “Calla” sets this tone from the very beginning with its wall of synth orchestration (that’s nothing short of epic) and a core song structure that could’ve just as easily been on the last Paradise Lost album. There’s a dreamlike, fantasy characteristic to the song that’s deceptively uplifting while it slowly draws you in closer, only to smack you down with the dense melancholy weight of “The Intertwined.” “The March of the Four” is without a doubt my favorite of the new tunes though; it’s a little more old school in its packaging, but there’s so much going on between the various arrangements, synth work, and guitar lines that it’s almost overwhelming. But then everything recedes for a moment and it’s just you and the gut wrenching intonations of dreary pipe organs….But then album closer “The Swan and the Raven” is just as impressive, sounding like a mashup of The Cure and dungeon synth, but only if Robert Smith sang in a death growl.

Skepticism have been doing this for a long time, and COMPANION demonstrates that they can keep things fresh while still making you feel very, very sad. It’s intense, it’s scary sounding, it and fills you with all kinds of existential dread (“Passage” is downright terrifying), but the sonic light and dark are entirely complimentary to each other and make for a dramatic listening experience. Turn up your speakers and let this album be the perfect COMPANION to your innermost insecurities, doubts, and fears.