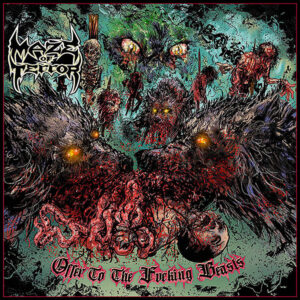 Across a body of splits and EPs, Peru’s Maze of Torment have been honing their blackened chops since 2012. And with their recently released sophomore full length OFFER TO THE FUCKING BEASTS, the trio have gone full Azagthoth and are ready to properly slay the masses.

The band’s press materials throw the “thrash” label around to describe the band’s sound, but that’s a bit of a misleading qualifier. There’s a verrrry real inspiration/homage to ABOMINATIONS-era Morbid Angel, those early Mike Browning days when it wasn’t exactly death metal and certainly not thrash as the scene knew it at the time, but somewhere raw and pissed off in between. Even the Cthulu summing chants at the beginning of “Priest of the Ancient Ones” feels like a call back to “The Invocation.” But if you can separate the art from the inspiration, the tunes eventually find their own footing and that’s when it starts to get good.

Though it never fully goes off the tracks, album opener “Priest of the Ancient Ones” sounds almost intentionally raw and caveman like with its hyperspeed riffing and whammy bar dive bombs. That turns out to be a total fake-out as “Angels of Acid” still delivers the speed, but with more focused hooks and early Hammett inspired soloing that legit will summon thy head to bang. Same can be said for “No Requiem for the Unborn” and “Death by Fire”, the latter of which sounds like it’s got some SCHIZOPHRENIA-era Seps inspiration behind it, both vocally and in the riffs. And “Shub Niggurath Awakens” is a monster of a closing track with its “flight of the bumblebee” intro and the general mania that oozes throughout the track.

OFFER TO THE FUCKING BEASTS should be a no brainer for fans that dig late-80’s proto-death metal; it’s raw (heavy emphasis on raw) and frantic enough to appeal to the extremists without totally turning off the denim and high top crowd. Maze of Torment bring the hellfire on album #2 and would appear to have full approval from the elder gods. Doesn’t get much better than that.

Track List:
1. Priest of the Ancient Ones
2. Blessed by Sickness and Death
3. Angels of Acid
4. Blood Horror Cult
5. Death by Fire
6. A Millions Kills
7. Destroy and Control
8. Starbeast
9. No Requien for the Unborn
10. Shub Niggurath Awakes