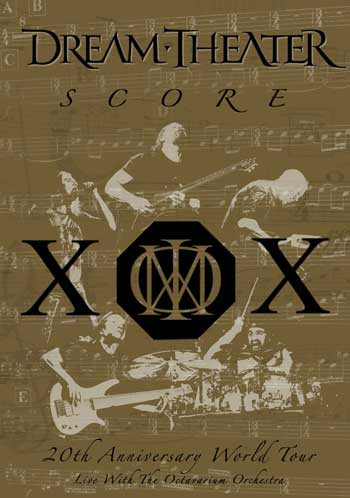 The cleverly titled SCORE (with double meaning fully intended) is the bands 20th anniversary DVD.    As I mentioned in a previous review, the home video 5 YEARS IN A LIVETIME sort of masqueraded as a fifth anniversary compilation despite it coming out on the bands 12th anniversary in 1998.  It is evident more time, though, energy and money were put into this official home video, the bands fifth.

The main event is the 20th anniversary show filmed on April Fool’s Day in 2006 in their hometown at the infamous Radio City Music Hall.  Quite an accomplishment and a career highlight for the New York band for sure.  Disc 1 is the concert, over 2.5 hours long.   It is a monster show.   The main attraction was having the band perform with an orchestra.  That is nothing new, Hard rock and Metal bands have been doing since 1968 (Deep Purple) but it is not a common and when it happens it is usually a big deal.  With a band like Dream Theater is was inevitable, in fact I’m surprised it took them that long to do it.

The multi-camera, multi-angle soot was of very high quality. It was filmed before Hi-Def was common but it still holds up. The band runs through a (mostly) chronological recap of their career, before doing ‘Six Degrees Of Inner Turbulence’ in it’s entirety with the orchestra. The band was in a pretty good point in their career; line-up stability, label support and string of well-received albums, both commercially and critically.  The cliché is that the band is ‘firing on all cylinders’ but in this case it’s true.  The band and orchestra integrate seamlessly.

I’ll admit that Dream Theater is not the most visually exciting band. That is not the point. They are not going to deliver a stage-show like Kiss or Iron Maiden.  They are having fun but they are working hard, concentrating and playing very complex music. I’m not a musician so accordingly, I get almost as much out of listening to Dream Theater live album as I do watching it. I don’t watch a Dream Theater concert and ask myself, ‘How did they do that?” and rewind and look at the players fingers. That is not a criticism, it is just their style; low on flair and sizzle, high on talent and substance.  Regardless, SCORE is still a career highlight concert and one to be cherished.

The bonus disc is the highlight of this package for me.  The center-piece is an hour-long documentary of the band.  It has better production values, more cohesion (it’s linear!) and better footage.   There is a metallic ton of archival footage going way back of the band when it was just Myung, Petrucci and Portnoy banging away busting out rush covers in Berklee.  There is a neat feature where the three guys go back to Berklee and wander around and make comments about the genesis of the band.  There is some cool footage of the band first singer Chris Collins. Everyone contributes even former members Dominici and Sherinian. Even the seemingly shy Myung gets a few words in…but not many.  We follow the band across their 20-year journey with video clips, live clips, fan testimonials, interviews; all very well produced and documented.  It takes us right up the soundcheck for the SCORE concert of Disc 1.  This is what the documentary on the 5 YEARS IN LIVETIME should have been.

There are a few extra bonus features, some animation and a few rare live clips. One of them was a live version of ‘Another Day’ recorded in Japan.  I don’t know why it wasn’t originally part of the LIVE in TOKYO VHS, maybe time constraints or something.

SCORE is a near flawless look back at this remarkable band. Even watching it again 15 years after it came out it still stands the test of time.