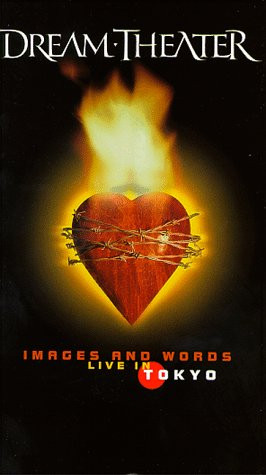 As of time of writing, on October 22, 2022 Dream Theater are poised to release their 15th studio album entitled A VIEW FROM THE TOP OF THE WORLD.  Any time the band releases a new album it’s a big deal so in anticipation of this momentous occasion I’ve decided to go back and re-watch and review some old Dream Theater DVD’s.  This three DVD feature ties in also with our goal of reviewing every Metal DVD ever released.

Originally released on VHS back in 1993, IMAGES AND WORDS-LIVE IN TOKYO is the bands first home video.  This was released ON DVD for the first time in conjunction with the bands second home video 5 YEARS IN A LIVETIME, back in 2004 in Rhino.

The title LIVE IN TOKYO is a bit misleading as this is not really a concert video but a pleasant blend of live footage, interviews, and videos, almost like a documentary.

I’m not a huge fan of constantly interrupting the concert as it interferes with the continuity and momentum of the live show but thus transitions from scene to scene quite well. The show was on August 26, 1993 and despite the band being quite early in their career you can tell they already had a massive following in Japan,  judging by the size of the venue, crowd and merch area!  The eight track concert anchors the proceedings and it is a well-done multi-camera shoot and a mix of static and roving shots.

Other impressions:  the band look so young and had so much hair!! They rock out to a typically restrained Japanese audience although Portnoy manages to get them going during his drum solo!

The home video has the band first three videos and inter-spliced are scenes of the band on tour in Japan, and other places, shopping, signing autographs (and boobs!) and generally having fun.

Dream Theater have always given very high value in terms of run time on their concert home videos, (many of them running 3-4 hours long) but I must admit, it was kind of nice to go back and watch this compact 90 minute release with a little bit of everything.  For a first effort this was very well done and a glimpse of the band in its ascendancy to Prog Metal stardom.