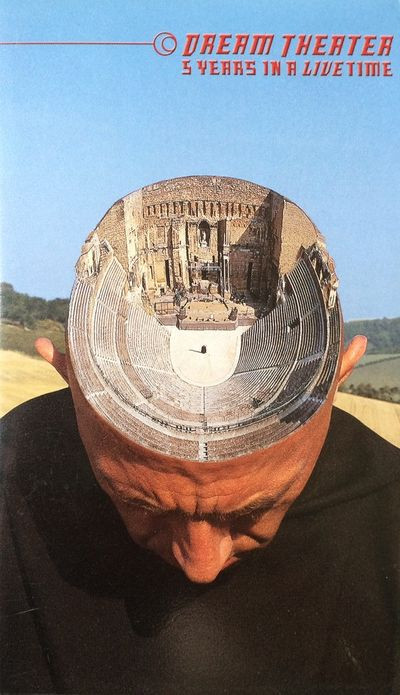 As of time of writing, on October 22, 2022 Dream Theater are poised to release their 15th studio album entitled A VIEW FROM THE TOP OF THE WORLD.  Any time the band releases a new album it’s a big deal so in anticipation of this momentous occasion I’ve decided to go back and re-watch and review some old Dream Theater DVD’s.  This three DVD feature ties in also with our goal of reviewing every Metal DVD ever released.

Originally released on VHS back in 1998, 5 YEARS IN A LIVETIME is the bands second home video.  This was released ON DVD for the first time in conjunction with the bands first home video IMAGES AND WORDS-LIVE IN TOKYO back in 2004 in Rhino.

Dream Theater’s fourth full-length effort FALLING INTO INFINITY is regarded for the most part, to be one of the bands weakest albums.  A combination of line-up instability, shifting labels and weaker songs combined to make that a weaker entry.  It didn’t chart as high as the last couple of records nor did it sell as many copies but regardless, the album and corresponding Double Live album, ONCE IN A LIVETIME, got the home video treatment.  The VHS was ostensively meant to act as a fifth anniversary product, (hence the title) despite it being closer to the  bands 10th anniversary.  Historical revisionism is wonderful isn’t it?

Following the structure of their first home video this is a real mixed bag of features.  That is putting it kindly.  The reality is that this Home Video is a jumbled incoherent mess.  It’s all over the place, no structure, lacking in most places.  We have a bit of narration but we don’t know who is speaking.  It jumps back and forth in time, a video clip here,  a live song there, it’s a mess.

On the positive it is still pretty cool.   Dream Theater aren’t really camera shy but they are for the most part pretty private.  You barely see Myung or Moore who was on the way out.   Moore’s replacement, Sherinian seems to be the only one with any energy often seen goofing around and having fun.

Highlights include the band doing a tipping cover of Metallica’s, Damage Inc. fronted by no other than Barney from Napalm Death.  They performed at a club show for Ronnie Scott’s birthday to a bemused audience who didn’t seem to know the song or who Barney was but clapped politely nonetheless.  Another brief highlight was the band’s alter ego Nightmare Cinema doing a club gig where they traded instruments and busted out the old Deep Purple classic, Perfect Strangers.   Clips from festival gigs abound, backstage mingling and so on and inter-spliced with all this footage are three official videos.

In terms of production quality it is a mixed bag again; ranging from bootleg quality to shaky hand-held cams to top-notch,  multi-angle cameras for the unplugged/acoustic show.

All in all, 5 YEARS IN A LIVETIME captures an area of a rare downward swing of the careers pendulum.  We get get commercial songs, artsy videos, ballads, acoustic stuff, cover tunes and much less hair (!) as the band try to figure out their place, shifting away from Metal into more Prog realms. Thankfully it didn’t last as the band went back to what they did best and came roaring back with their first concept album.