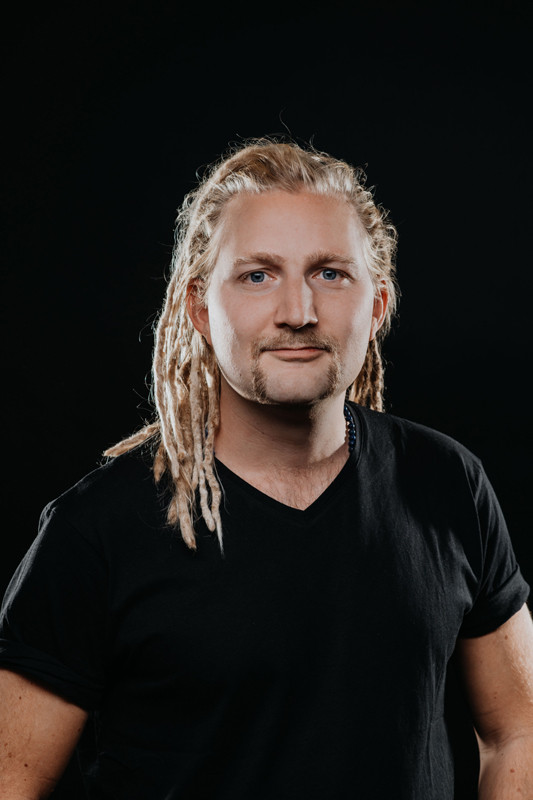 Legendary drummer Thomen Stauch is back with the second release from his new band Mentalist, titled A JOURNEY INTO THE UNKNOWN. The album contains 11 energetic and hard-hitting melodic heavy metal tracks. I had the pleasure to have a short chat with Swedish-born singer Rob Lundgren about the work on the new album, the record’s many guest appearances, including bass player Mike LePond (Symphony X) and singer Henning Basse (Firewind), to mention a few. I also asked him why the band chose to interpret Neneh Cherry’s old hit song “Manchild”, and more.

Hi Rob thanks for taking the time making this interview today, I hope you’re doing fine?

Let’s begin with talking about the band’s debut album FREEDOM OF SPEECH, which came out in 2020. Are you happy with the outcome of the album and do you have an idea of how many copies it has sold so far?

I am very happy with the debut, we had some amazing accomplishments as well! As for sales, well, I lost count after gazillions of VHS sold, haha. Seriously though, in this new digital world we had about 250,000 streams of the debut album’s songs; not bad! 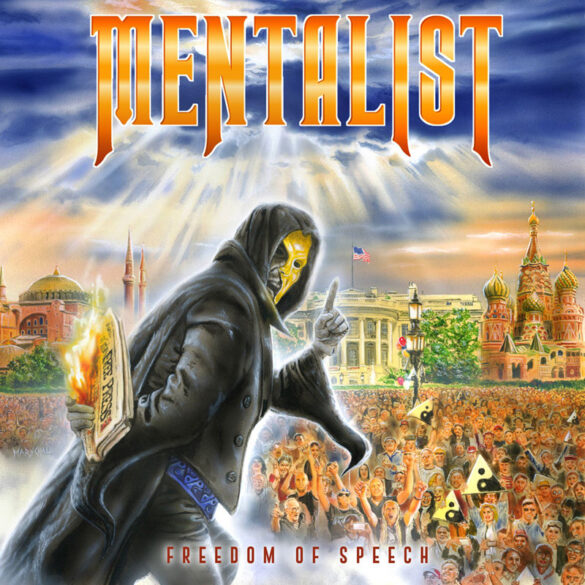 The band wasn’t able to perform or tour FREEDOM OF SPEECH due to the pandemic. Would you have liked to tour to promote the album?

Absolutely, touring is always fun but this actually gave us lots of time to continue writing and recording more music. We’ll get to the touring part soon enough though.

How has the pandemic affected you and the rest of the band?

It locked us down…once again, in the studio, hehe. Sure it also affected us on a personal level in different ways but everyone in the band has ways to handle whatever is thrown at us. A human thing I guess, what doesn’t kill us, make us stronger.

The new album A JOURNEY INTO THE UNKNOWN

When I spoke to you last year you said the new album was already set to be launched. When did the band begin working on material to A JOURNEY INTO THE UNKNOWN?

I remember the title track was already in the making when I was finalizing the vocals for the debut. After that we just kept writing material. I also traveled down to Germany for about 10 days to be involved with the process. Good times!

Who writes the material?

The guitar players Peter and Kai seem to have an unquenchable thirst for new music, so they just keep hammering away at it, haha. Me and Thomen also come with ideas from time to time. I also write more and more lyrics but mostly it’s the “axe section” that does the heavy lifting in the initial creative area. I do enjoy spicing up the vocal side with my own touches and melodies though. All in all it’s a great team effort until we have a finished product.

The info sheet says this new opus puts a strong focus on guitar melodies and vocals lines. Do you agree with that? What do you think is the biggest differences if you compare the new album with the debut?

For me, the biggest difference was to sit down with the guys in the same room and compose different parts of the songs here and there together, talking about lyric themes and creating things in the moment instead of using too many ideas from “the archives” so to speak. The biggest difference I would say is the final sound. We worked with Jacob Hansen on this one and tried some new things there compared to the debut. Heavy stuff!

Was it the bands intention of creating a pretty long album? I mean it clocks in around 60 minutes and contains 11 tracks.

Haha, it’s funny how some feel an hour is “long” in today’s standard. I personally think it’s normal. We actually never talked specifically about the length, but I think the aim was around an hour. The album was actually gonna have an extra song but we decided to save it for later. 😉

A few guests make appearances on the album, like Oliver Palotai (Kamelot), Mike LePond (Symphony X), and Henning Basse (Firewind) who does backing vocals and also duets with you on “Live Forever”. Palotai also appeared on the debut album, but how did the rest of the guys end up on the new album, are you old friends with everyone?

Yes, there are people in the band that either know or have contacts that helped us gather the mentioned artists. We initially talked about having a new vocal sound with a subtle choir feel to the choruses. Different singers were discussed but it was awesome to work with Henning Basse. Cool dude!

I read that it’s Mike LePond that plays the bass on the new album. Why didn’t full-time member Florian Hertel?

We had to look for a replacement as Florian became a father and needed to prioritize family matters. We wish him all the best! We were also very happy to have Mike come in and nail the parts after having some guys try out. As a huge Symphony X fan, I’m very proud to have him on the album.

On the debut you sang a duet with Daniel Heiman (ex- Lost Horizon). Is the duet-thing also happening on the next album?

Yes, like you mentioned, Henning Basse is rocking a duet with us and I’m sure there will be another duet with some awesome singer on the next album. It’s becoming a thing with us, haha. Nothing is decided yet, we’ll see. We all enjoy great singers (who doesn’t?) and I’m always curious to see how my voice blends with another whether it’s male or female voice.

“Battle Dressed” is an epic tale about the never-ending wars that have plagued the world. It’s especially about people who are being sent into battle dressed as soldiers but in reality could be friends in different circumstances. The ones that want the wars in the first place won’t usually head out on the front line. Very sad. This song has actually one of my fav vocal lines. I remember composing the part and it was one of those melodic choir parts that draws a big smile on the face for a long time. 😉

“Live Forever” is about a man who’s biggest wish is to live forever, sung by me with a narrator sung by Henning. It was fun to compose this one. We wrote different melody versions within the band and then collected the best parts. It also went through different stages and visions from first sketching ideas until the final product. A true journey into unknown waters you could say, haha.

Does the title A JOURNEY INTO THE UNKNOWN have any special meaning to the band?

It does now, haha. We are very proud of this album and it has been an unknown journey this whole process with writing and recording during the pandemic. Life in general is an unknown journey, we love to plan and think about past and future but ultimately we cannot predict anything. Every step more or less is into the unknown…

Was Andreas Marschall, who created the band’s mascot, given free hands to come up with a fitting mascot to represent the band?

We initially had a template we provided him, along with our ideas of what we wanted. He then did his magic with creative freedom and came up with the final art. Really cool! I’m eager to see where the Mentalist will show himself next and in what way. 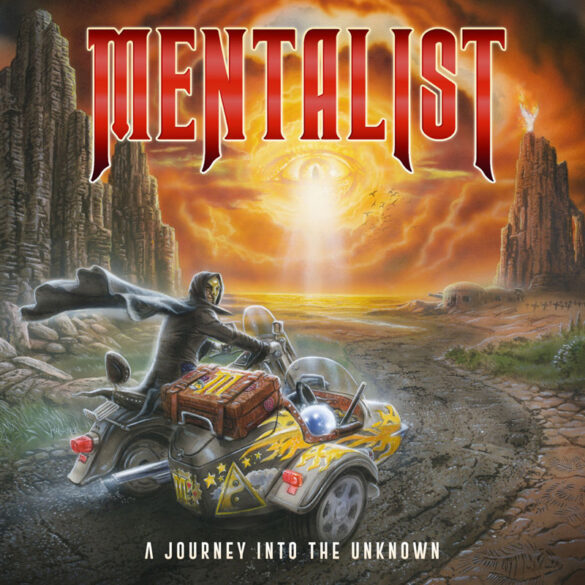 I think that A JOURNEY INTO THE UNKNOWN feels a lot faster and more melodic music-wise compared to the debut album, what do you think? Is the new release leaning a bit more into the melodic heavy metal spectrum?

You have a good ear, yes there have been changes in style a little bit. We are constantly trying new things and melodic heavy metal sounds cool, haha. I don’t really see a true connection between the written language and frequencies of music so I tend to stay away from labels as much as possible. But I do understand the need and I love both melody and heavy metal. The only word missing I guess would be “dynamic” so let’s create a new term: MelodyNamic Heavy Metal, hehe.

A Journey Into The Unknown (OFFICIAL MUSIC VIDEO)

Who chose to feature a cover of the Neneh Cherry song “Manchild” on the album? I mean, it’s a pretty unusual song to interpret. Do you think that fans of the band know who she is?

I’m not sure who came up with the idea, but Peter first told me about it. A bit unusual yes, but we enjoy trying things like I said. I have also done some melodic rap parts in covers before so I was interested to see how it would turn out. Fans may not know about the original, but that makes it all the more interesting to see their reaction. Hope they dig it!

Do you have any plans to make a video for any of the songs? Is it possible to shoot a video with everyone on set during the pandemic?

We did a few videos that have been released using green screens and other locations but yes, the pandemic is creating some obstacles along the way. We’ll jump over them as we go, in a safe respectable way of course. The videos that have been made so far are for “An Ocean So Deep”, “A Journey Into the Unknown” and “Modern Philosophy”.

I know that fans would love to see the band live on stage again. Do you have any idea on when it’s possible for the band to head out on the road again?

It’s still very uncertain when that will be. We of course wanna rock the stages but we’ll stay patient and keep working on music in the meantime. We hope to see the fans soon though, it’s always fun to see people sing along and rocking out in the crowd.

There’s a limited fan box edition of the album available. What extra features does it include?

The Fan Box includes the album (CD) and many little fun items including an actual Mentalist game. I knew I was a pawn in the game of life but now it’s official, haha. We have released a video on our Facebook where all the features are shown. Check it out and hurry grab a copy before they are sold out. Shameless advertising I know, ha ha.

Could you give the readers three reasons why they should buy A JOURNEY INTO THE UNKNOWN?

I only need 1 reason to give…Rock n’ Roll! Actually, that was two, let me rephrase, what I meant was, METAL! If you still are not convinced then 2: Spotify and 3: Play (Enjoy!)

Well, that was all for now. Thanks again for taking the time for this interview, I wish you and the band all the best in the future, stay healthy and safe! Do you have any final words of wisdom to share with fans and readers?

Thank you so much! Well if you want words of wisdom then use any word that will move you deeper beyond words. Meaning that words can be a great help but they can also be poisonous. So learn to see them for what they are, just words, a small part of this amazing reality we are part of. Enjoy it my friends and keep rocking! Thanks for the support! 🙂