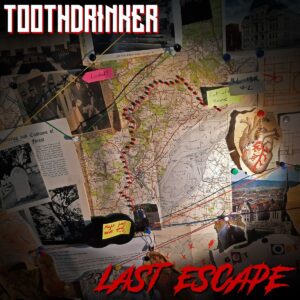 Toothdrinker is a project hailing from Cardiff, United Kingdom born from the mind of Sam Khaneka, who was given the task of bringing together several musicians from his local scene and shaping a rock opera based on the popular Resident Evil saga. The name of the album is: LAST ESCAPE (2021) and it has 11 pieces divided into two acts.

The best quality of LAST ESCAPE is the music which can be enjoyed perfectly even if you do not know anything about the saga. The songs are full of great melodic resources, an example of this is “Valentine’s Day”. The album is self-produced, however this was never a problem in making the songs sound good. The production level is excellent as they know how to use various effects perfectly to make instruments sound better, “An Expression of Concern” is a great example.

The only detail is the enormous distance that exists between the music style we listen to and the theme on which it is based. Anyone who has had the opportunity to play Resident Evil 3 will know the enormous tension caused by some of its scenes, something that is never perceived on this album; it’s like the album is not based on the game. It is because of the distance that exists between the music and the video game that the album seems a bit disjointed.

However, this distance between the music and the saga is also a quality because the album does not demand to be a Resident Evil fan to enjoy the songs. It is a very nice album on its own, where we can clearly hear the talent and quality of the guest musicians. It is a great mosaic of what the British underground scene can offer today. LAST ESCAPE is a great tribute to the saga, but more importantly, it is a great show of love for music through collaborative work.