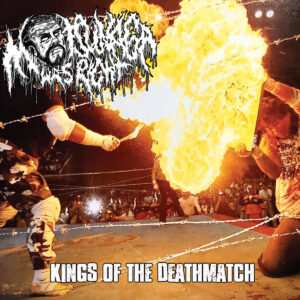 I’m 3 seasons late to the party, but I’ve recently become hooked on Vice TV’s Dark Side of the Ring series. Admittedly, the last time I paid any real attention to pro wrestling, Dusty Rhodes was still considered an athlete. But the whole concept of the “deathmatch” and the performers who go to brutal extremes to put on a good show immediately drew parallels to underground death metal and grindcore. They’re not in it for the money, they’re in it to push boundaries and pull a reaction from the audience.

Which brings us to Matsunaga Was Right and their sophomore LP KINGS OF THE DEATHMATCH. Named during a drunken bender after Japanese deathmatch legend Mitsuhito Matsunaga, the trio blitzes through 16 tracks in under 15 minutes with a brand of spastic, drum programmed psychotic grindcore that presents itself as a fitting compliment to the spastic insanity of an actual deathmatch.

There’s definitely a manic kind of Ripped to Shreds / Anaal Nathrakh vibe across the album, but the degree of intentionally noisy DGAF chaos that bleeds across the album is some next level stuff. If you’re looking for some kind of redeeming social value or hook to lock into, keep on walkin’ friend. KINGS OF THE DEATHMATCH is about beating your head against barbed wire and broken glass for as long as you can stand it, or at least for as long as the band decides to keep playing.

Thought it’s not at all a 1:1 comparison, the frantic pace and seemingly random purpose of the songs themselves drew me back to bands like OLD and Filthy Christians, which may have some deeper meaning, but otherwise just reinforces that art doesn’t always have to be for everybody. But – if watching a couple of dudes grind shards of glass into their faces while tangled in barbed wire, chances are you’ll find that Matsunaga Was Right to be the perfect pairing.