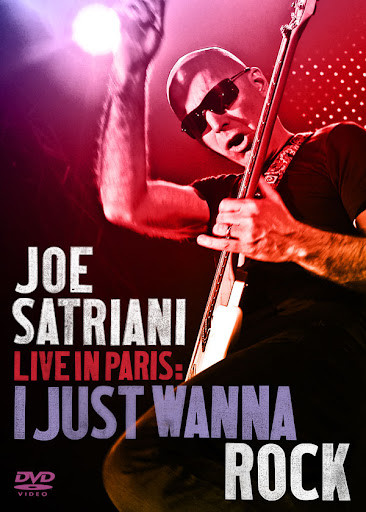 Since I read and reviewed the new Joe Satriani comic this month, I thought I’d go back and review Joe’s live concert DVD from 2009 to keep picking away at the backlog of DVD’s we have to review.  Enjoy!

This DVD is a stand-alone product with a single page insert with credits, a photo montage and nothing more.  The concert runs a decent two hours and 15 minutes.  The stage set is pretty streamlined with some simple rear-screen projection stuff.  It is a mutation-camera show with about six or seven still angles and some roving stuff as well. The shots seem washed out a bit at times but was probably not shot in HD.

The producers, or Joe or the label or whoever made the interesting choice to add a whole tons of special digital effects post-production.  I’m pretty ambivalent and this style.  On one hand it adds an interesting visual element and and others the ultra-rapid, flashing, strobe effects could induce seizures.  The concert ended up looking more like a video on MTV than a concert at times. It was probably the right decision as a theatre/seated show of middle-aged, die-hard music guys probably would not have that much extra to entertain us.

Naturally, the performances were top-notch and Joe’s stage banter was minimal but pleasant and sincere. Stu Hamm knocks out a killer bass solo too. The show is pretty ripping over all.

The track list was, slightly unadventurous, but Joe knows  what the fans want, what his most popular albums are and he delivers.  This was filmed and recorded  in 2009 on the Professor Satchafunkilus and the Musterion of Rock tour and he plays six cuts  from that record and relies heavily on the second, third and fourth albums due another nine cuts, all the big hits.   I must admit I got a few chills with the massive audience participation, sing-alone’ double encore of ‘Crowd Chant’ and ‘Summer Song’. Great stuff!

The bonus interview is a real highlight.  Joe is sitting outside at a cafe in Germany inter-spliced with clips from the tour; backstage, autograph sessions, goofing around and more.  Joe is an articulate and thoughtful interviewee but I wish maybe they didn’t stick his camera right up his nose the entire time.