Back From The Dead Fest:
Onslaught + Memoriam + Decrepid + Damim + Slimelord 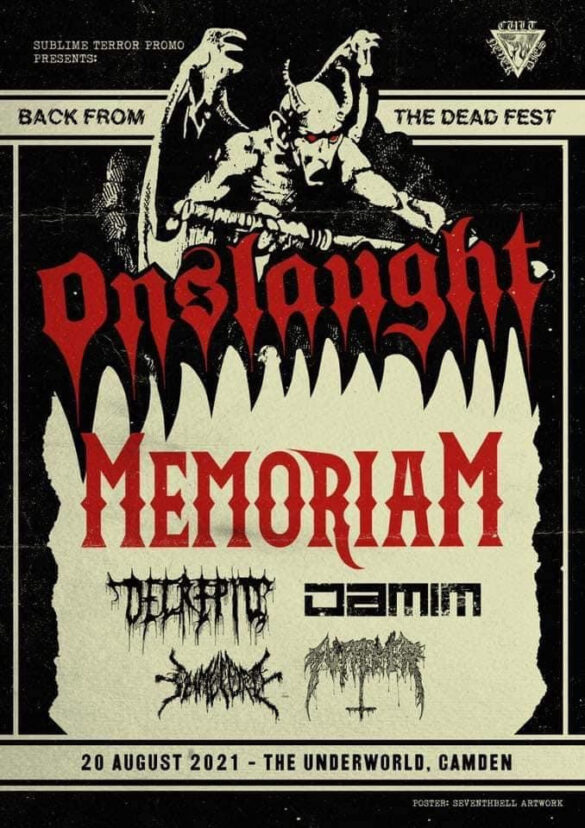 Atvm sadly had to cancel their appearance at this Friday night show, with their replacement Sufferer having to do the same last-minute. This meant the first performance started three-quarters of an hour after the venues doors opened.

Slimelord, a relatively new band that formed in 2019 from Leeds, opened the half-day fest. They play what they describe as “swamp death metal”. There aren’t many people in the venue when they start but the lads do not let this phase them. Their buzzing, dirty guitar sound seemed to mesmerise onlookers, with the vocalist growling like a bog monster and helping the quintet live up to their name.

For a band that has only existed for a couple of years, they put on a good show and it was plain to see why they were chosen to perform amongst the other more established outfits. An impressive start to the evening from openers Slimelord!

Londoners Damim followed with a half-hour set. A striking red theme (the colour of the Eddie Van Halen amplifier head, the guitar wielded by frontman Nathanael Underwood and the bass held by Faust Perez) stood out on the dimly-lit stage. They kicked things off with “Eyeballing,” which features a mix of unclean and sung vocals, drums that switched between blast beats to groove-oriented fills and some more fun moments. 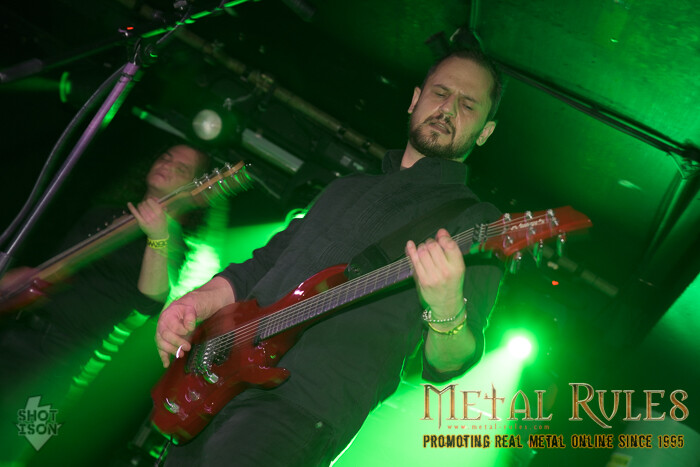 A dramatic pause in the middle of their first song caused the audience to applause, before the lead vocalist informed them that it was “not finished yet!” It really shows this is a band that is far from predictable, and who know how to keep their audience pleasantly surprised.

The second song of their set was much more aggressive vocally, and about half as long. Onlookers were clearly impressed as heads were banging harder after around ten minutes of watching Damim.

Dedicated a song to those that had lost someone and captivating with their progressive pieces, Damim definitely made their mark with their brand of blackened death metal.

By half six, a sizeable crowd had gathered within the walls of The Underworld, just in time for the city’s own death metallers Decrepid to arrive on stage. After some technical difficulties with the mic sound, the sheer power of the frontman Cris Bassan’s voice could finally be felt (and rivalled the deepness of the bass and the razor riffs), and it wasn’t long before the band had most of the venue headbanging relentlessly.

Decrepid were far more animated than their predecessors, with most of the movement coming from their frontman. Some serious windmilling came from the vocalist, whilst he held an open can of Stella Artois managing not to spill a single drop, successfully egging the crowd on to behave in a similar fashion.

They also took a moment to introduce their new guitarist Matthew, before priding themselves on playing old school death metal, “the way it should be” much to the fans’ pleasure.

One of two bands on the bill that were at Bloodstock Open Air the previous week, next up was Memoriam. They are an OSDM band from Birmingham, fronted by former Bolt Thrower vocalist Karl Willetts.

Opening their set with “Undefeated“, the quartet have the Underworld in the palm of their hands. The song has a chugging infectious rhythm that had many punching fists and raising horns. Willetts is a very eccentric vocalist with a commanding voice, who makes sure shows are as interesting for the eyes as they are for the ears.

The pit really started to open up a couple of songs in and it wasn’t long before a fight broke out in front of the stage. This prompted the singer to ask the brawlers to calm down, encouraging them to practice “love, peace and respect” and the message got through as they made amends.

At one point in the show, Karl asked the crowd what they had been doing for the past 18 months, and eventually went on to say “fuck all, like the rest of us” which elicited a laughter and lightened the mood.

Sirens were played at beginning of the song “Resistance” which had a very captivating light show with blue & red colours darting chaotically across the stage, creating the idea of an emergency situation.

In between songs, Karl told the audience that guitarist Scott Fairfax had a question for them, asking “are you ready to go crazy?!” Enthusiastic cheers followed, before an even wilder mosh pit erupted in response when the music resumed.

Things calmed down a little for the arrival of “As My Heart Turns Cold,” with its closing lyrics “it would take a better man, a better man than I” carrying a particularly eerie tone. The band also took a moment to acknowledge those who fell victim to the current pandemic, a gesture that must have warmed the coldest of hearts.

By the end of the set, the front-man was shirtless, drenched in water and thanking all who turned up and gave it their all. A very eventful and highly entertaining sixty minutes from Memoriam.

A mere eight days after headlining the Sophie Lancaster stage at Bloodstock, Brum thrash metallers Onslaught closed the show at Back From The Dead Festival. They seemed so excited to be back in London performing, and made sure to tell everyone so several times during their hour-long set.

Dave Garnett is a born showman, belting the lyrics out with confidence and darting to every inch of the stage. There is never a dull moment with these guys. The bassist really got the crowd going, taking every chance he got to engage with them and keep the energy amped up for songs like “Killing Peace” and “A Perfect Way To Die“.

Garnett hit some delightful high notes on “Metal Forces”, and the energy levels from spectators were very similar to when they played the song at this year’s Bloodstock, when former vocalist Sy Keeler joined Onslaught as a surprise guest vocalist.

“66 Fucking 6”, one of the catchiest tracks played by the five-piece, went down a treat, and had metalheads screaming its title in each other’s faces.

Graced with a mosh-pit to match its decimating sound, “The Sound of Violence” brought the house down as people somehow still had a lot of fight in them ten songs into the set.

“Religiousuicide” from the band’s latest album has only been out a year yet it still had many belting out its lyrics, chanting the words “Jesus fucking Christ!” the loudest, before classic “Power From Hell” closed their set and garnered an equal amount of excitement.

In short, a great evening at The Underworld Camden, that breathed life into the lungs of the deflated metal live scene after a year and a half. (Un)rest assured, the attendees were sufficiently hyped up for the after party at The Black Heart.