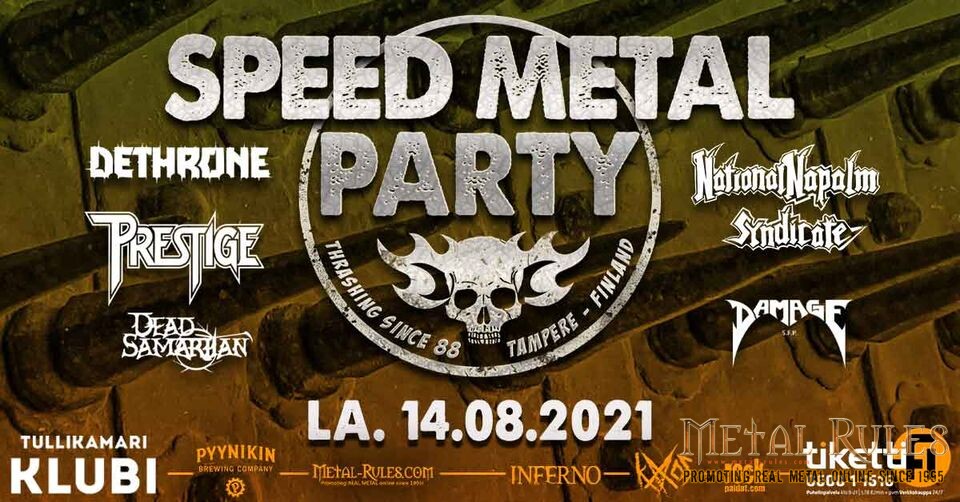 Speed Metal Party  – what a name may someone think over there. Well, the moniker of Speed Metal Party originates from the heyday of the 80s speed/thrash metal extravaganza. At that time thrash metal, speed metal was the most vicious brutal and fastest metal played at that time. The Finnish scene was boiling over when bands were formed by young thrash metal fans. Speed Metal Party was arranged by young metal fans to have an opportunity of playing gigs. Prestige and Dethrone emerged from the Tampere area and invited their friends to share the stage with them. From punk to thrash that sounded aggressive and brutal. Years passed by until 2019 when the reactivated thrashers Prestige wanted to resurrect the old school Speed Metal Party event. For example, the legendary Razor made the first visit to Finland at the Speed Metal Party. Due to the raging pandemic, the annual Speed Metal Part was forced to be postponed a few times. Until August 2021, the members of Prestige decided now or never as the band was about to release the first album after the 30-year break. After several insane try-outs and arrangements Speed Metal Party could be carried out, but with all kinds of restrictions and special arrangements. Only 200 people were allowed to enter to a 1200 capacity venue, a 2-meter distance between tables.Unfortunately, all kinds of restrictions and rules prevented the audience from having fun or doing the old school stage diving. On the other band the whole event was

The local thrashers Rain Of Terror kicked the night off by proving the thrash metal blood runs in the vessel in the younger generation. The four-piece sounded ok, but yet they have to work on songs in order to have hooks and kick-ass riffs. The young thrash maniacs knew how to thrash fast with the crazy speed.

Damage S.F.P was already in the first wave of the Finnish thrash metal scene in the late ’80s. The band split and disappeared for decades until a few years ago, the old trio gathered together and refreshed the old school speed/thrash metal approach. The band’s stuff had obvious Metallica influences as the songs had similar ideas. The old school Metallica had definitely a major impact on the young thrash metal bangers over 30 years ago. Damage S.F.P sounded surprisingly good and had killer-sounding tunes with the old school vibes in the sound. The singer’s more traditional voice style may sound odd to the modern-day extreme metal puritanism. However, it was refreshing good to hear the real singing in tune. The three-piece sounded good, but a little bit lost on the major stage as the bassplayer had to move all around the stage. Looking for the more traditional speed/thrash metal, check out Damage S.F.P.

Another old-school thrash metal act from the heyday of the 80’s metal era got onstage. National Napalm Syndicate have undergone more than a few line-up changes in their long history. The driving force and guitarist has successfully navigated the band thru these years without giving up at all.  As for the present day, the current line-up has played one show before the Speed Metal Party event. N.N.S mixed the old-school thrash metal tunes with the punkish stuff in the approach. The five-piece old school thrashers sounded tight and their performance was well coordinated without falling into hassles, but the humor and funny were part of the piece of the puzzle in their playing and performance. The new singer handled the frontman duties perfectly and sounded furious. N.N.S shared both the straight-aggressive thrash with the old-school hardcore/punk vibes as well.

Dethrone is one of the local bands hailing from the Tampere area. The four-piece released a couple of albums in the late 80s and early ’90s. After the god-awful second album, the band totally vanished from the map. As any other band from that era, Dethrone returned to the scene a few years ago when they were invented to play at the Speed Metal party. Dethrone hit the stage once again to offer the speed/thrash metal yet more melodic and more Metallica influences approach. The songs had mostly been picked up from the debut album LET THE DAY BEGIN.  The songs from the debut album go back in time to the late ’80s and early ’90s, it gave a more nostalgic feeling of the Finnish speed/thrash metal of the heyday. However Dethrone sounded surprisingly good and vital, but with the old school style.

Prestige basically had the same kind of fate as other bands playing in the event. The band released three albums in the heyday of the speed/thrash metal era, When the biggest enthusiasm faded, members pursued other interests in their career. Prestige got back together app. 10 years ago.  Until the  new opus titled saw the light of day. The old school thrashers Prestige turned out to be a vicious sharp and strike. The four-piece filled by the former Korpiklaani drummer brought the old school vibe with the modern touch making the old songs sound tight and brutal. It was obvious the former Korpiklaani drummer’s way of playing was tight with some blast beat elements. The set consisted of newer songs taken from the just released and highly claimed come back album. Prestige sounded tight and extremely vital and thrashy. By the way forgot to mention the title of the new album REVEAL THE RAVAGE – go and get it… it rules !!!