One of the most interesting rising bands on the Canadian scene today is undoubtedly Ravenous. The style of this group combines the most melodic of Power Metal with the most aggressive and forceful of other genres, resulting in a unique and interesting sound that can be heard today.

Since the release of their debut album: EAT THE FALLEN in 2019, the group has continued to grow its fan base. Aware of the enormous potential that Ravenous still has, the group decided to take a step forward with the launch of their new full-length titled: HUBRIS (2021).

They have done things so well that even during the making of HUBRIS they were contacted by Fredrik Nordström himself (Arch Enemy, Dragonland, Powerwolf, Hammerfall and list simply goes on and on) who, surprised by the sound of the band, did not hesitate to work with them.

We managed to contact vocalist R. A. Voltaire and guitarist Jacob Wright to tell us about this album that is undoubtedly destined to become, at least, a candidate for record of the year.

Cristóbal Torres (CT): Let’s start from the beginning, could you please tell me how the band started and how hard you had to work to be able to launch ETERNAL HUNGER in 2017?

R. A. Voltaire (RAV): The band came together as my “brainchild” after backpacking across Europe to several festivals and feeling inspired – the idea was to blend the best parts of Thrash/Speed Metal (fast crushing riffs), Power Metal (soaring vocals and catchy choruses), Black Metal (raw aggression and blast beats!) and Progressive Metal (songs that aren’t boring and structured like every other band) into anthemic Metal bangers that Power Metal enthusiasts and those allergic to the genre could all enjoy.

We gathered a “local star” from each genre, self-recorded and self-released our EP ‘Eternal Hunger’ in 2017, and to be honest we weren’t sure if people were going to enjoy it or not, but after touring with the likes of Hammerfall, Delain, and Striker in our first year and seeing the response live (like selling more merch than Hammerfall every day on the tour) we realized we landed on something worthwhile! 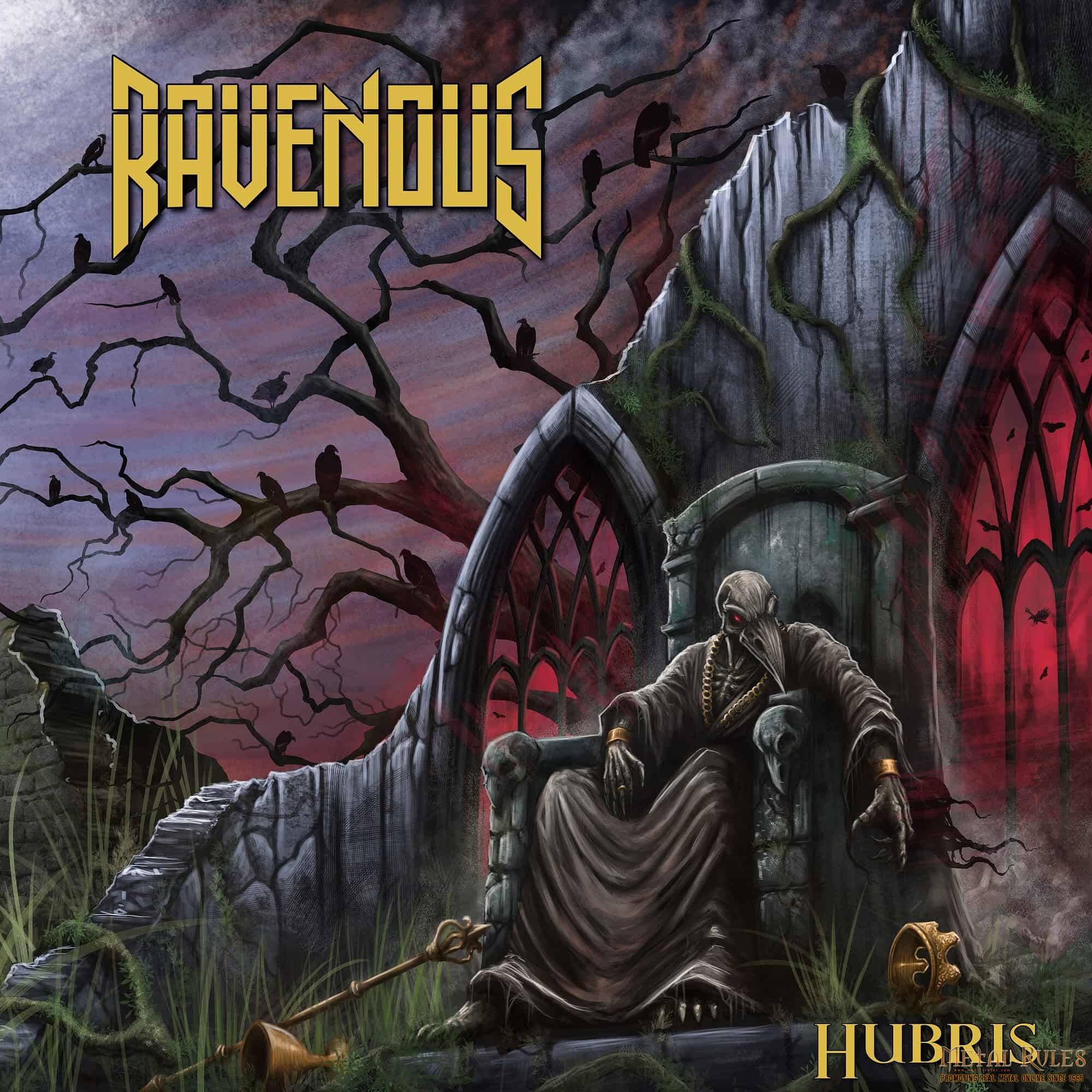 CT: What motivated you to take hubris as the central theme of your new album?

Jacob Wright (Jake): We wrote this album in spring 2020 during the early uncertain times of the pandemic. As the songs came together and the themes emerged it was clear that Rav and I were both fixated on the themes of grandiosity and arrogance leading to downfall. Hubris was the central theme hiding in plain sight all along.

CT: I am in awe of this second album and I think it will be a matter of time to see you on the biggest stages. When that happens, do you think hubris will consume you or will you be immune to it?

Jake: I would hope that we would heed our own advice from the cautionary tales we have assembled for the HUBRIS album, but knowing our own hunger and arrogance I could see us being somewhat consumed by hubris… We’ve got to stay on brand after all!

CT: I really liked your sound because it seemed very power metal to me but with a unique voice, which does not seek to copy the high voices we usually hear, was it a conscious decision or was it something circumstantial in the band?

Jake: Both! Rav’s natural voice tone and range is obviously a determining factor in the vocal sound, but we also wanted to distinguish ourselves a bit from the crowd of Power Metal bands out there. Hybridization of genres can be a risky move because you may potentially alienate yourself from many genre-specific listeners. The strategy on our end has been to toe the line of Power Metal but to always let our other influences shine through.

CT: Did you learn anything from making your first album that you applied to this sophomore album?

Jake: The EAT THE FALLEN album was a fairly smooth and casual process – from writing and recording to editing and marketing we somewhat took the easy route. This time around we really wanted to push our limits and create something really polished; maybe something that could sneak onto the “adult table” with some of the other albums from giant bands in the genre and not sound out of place or amateur. The process was long but we’re thrilled with how it turned out!

CT: I really liked your video for “Die 1000 Deaths”, what is it about Akuma that captures so much attention?

RAV: The simple answer? He’s the only Street Fighter character I’m proficient with! But Akuma’s story is drenched in Hubris – the notion of wanting to achieve ultimate power and turning into an emotionless killing machine fixated on nothing but mastering ‘Satsui no Hadou’, challenging those that defy him in a test of power, and believing he is always in the right by sticking to his strict warrior code (even though he killed his master) are all perfect representations of what this album is all about! Plus as a kid playing Street Fighter II Turbo – who else is more badass than Akuma?

CT: I don’t know if you watch wrestling, but have you ever seen Kenny Omega’s entrance as Akuma? It was a total blast!

RAV: I hadn’t seen it until you mentioned it, but I guess I’m now a Kenny Omega and the Young Bucks fan! Poor fella’s costume didn’t arrive in time though…

CT: Were the rest of the songs also composed during the pandemic or when did the creative process for this album take place?

Jake: We wrote almost 20 songs in about a month around April 2020 and then further refined, re-wrote, and re-arranged them into the 10 songs on HUBRIS in the months that followed. Isolation and uncertainty doesn’t always fuel creativity, but at least Rav and I were motivated to get this going during that time!

CT: What motivated you to request the services of Fredrik Nordström and how did you feel when you heard his final work?

RAV: Freddy (as we love to call him) actually reached out to us! We had Robert Kukla from Obsidian Recording Studios doing our vocal editing right next door to Studio Fredman, and as the story goes… Freddy walked by as Rob was editing the vocals for our song “March of Hunger” and asked: “Who is this?” – When Rob told him, he said “This is the cheesiest thing I’ve ever heard… I have to mix this!”.

Needless to say, we were excited to be working with a world-class award-winning engineer that helped create some of our favorite albums. Freddy absolutely knocked it out of the park and we can’t wait for everyone else to hear how he managed to bring us to the next level of production.

Jake: Our Label and Distributor in Asia is Spiritual Beast; due to high CD prices in Japan it is common practice to release bonus tracks for that market in order to encourage CD sales. We have already released the bonus version of “Die 1000 Deaths” online, and you may hear the other bonus track in upcoming live recordings!

CT: Are there already tour plans or are you still in lockdown?

Jake: We have a couple of upcoming release shows scheduled in October. With the changing situation, it’s difficult to plan for touring at the moment but we will seize the opportunity when we can!

CT: Will we see any new videos from here as you release the new album or even later?

Jake: We have an upcoming Lyric Video for the song “Astral Elixir” coming out in September, a live-action music video in the works for “Claw is the Law”, and plans for several other videos in the coming months!

CT: Thank you very much for your time and congratulations on this incredible album, it will impact many. Any final words for the readers who are just about to know your music?

Jake: We come from many different musical backgrounds and we hope that our influences come through… We make Power Metal for both people that love the genre and hate the genre!