Danko delivers fast, aggressive, and riff-driven songs with thought-provoking lyrics. The CD is a testament to his rebellious spirits that drive these finely crafted songs. Power Trio is packed with songs that offer big hooks and even bigger grooves like on “I Want Out,” “Saturday,” and “Dangerous Kiss,” along with some punk ethos thrown in for good measure.

With members from his band, trusty bass-slinging accomplice JC and drummer Rich Knox, together they demonstrate just how huge Rock & Roll should sound; dangerous and fast! They also have two upcoming streaming concerts on August 28th with tickets available here: www.eventbrite.ca/e/danko-jones-european-power-trio-release-concert-tickets-162970740873?aff=ebdssbeac

I had the pleasure of speaking to Danko about the energy, power, and enthusiasm that went into the creation of Power Trio, how it takes writing 50-100 riffs to get to the perfect song, and what he thinks of all the summer shows being canceled due to COVID. 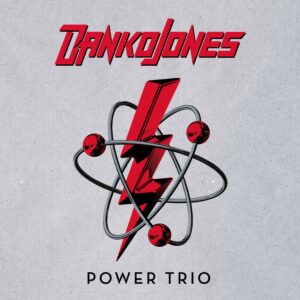 The energy, power, rage, and enthusiasm is not lost on me with this record. I can only imagine it was the way you were feeling being locked in quarantine?

Some of the songs like the first one, “I Want Out,” “Start the Show,” and “Lets Rock Together,” are songs that you can tell by the title what they’re about as you don’t have to analyze it too deeply. It’s all about the results of being locked up for 18 months and the reaction to the pandemic.

“I Want Out” is my favorite song. Tell me about its creation?

Yeah, I wrote the chorus melody while playing guitar and looking out my bedroom window.

I miss records like Power Trio, where the songs are riff-driven and not overproduced, not layered with tons of unnecessary guitars, and over-sanitized. It reminds me of the days when Rock & Roll was dangerous and unpredictable.

I try not to think about it too much and follow what my ears are telling me. It’s pretty much how we have always written songs. We really like betting on our ears and trying not to second guess ourselves. If the riff sounds pretty heavy and the song sounds rocking, then we proceed. I think bands start to overthink things. They get too self-conscious. That’s the secret to us; listen to a lot of music, trust your instincts, and let it go when writing riffs. I will say this; it takes me about 100 riffs to come up with one good one. So, for every riff you hear off the record, there are 50 to 100 riffs that came before it. It’s easy to write a riff but a lot harder to write one that is locked in with a really good melody and that doesn’t come every day.

Then you have to be able to sing and play guitar.

Exactly. Sometimes you get to the studio, and the music is written. I have to be able to play it and sing with it. If it’s too complicated of a melody, I won’t be able to do it, and the same goes with the guitar parts.

To that point, so many bands I grew up listening to had riff-driven songs. On their current records, every beat and measure is cluttered with something making the song unappealing and impossible to follow. They are more concerned with being guitar heroes and are expected to do crazy guitar work. You have memorable songs with great flow.

Thank you, it pays not to be that well versed on your instrument! [Laughing].

How do you self-regulate not cramming too much into each song?

That’s JC, our bass player. He is really good at taking those things out. Sometimes I’ll over sing or overplay, and he is going to take it all out.

Songs are written in different ways and for different purposes based on your frame of mind, like you with the quarantine. Do you do find yourself creating something adequate one day then suddenly creating something very special the next, like you mentioned, with whittling down 50-100 riffs to get to one song?

Danko Jones: Yeah, sometimes a week or two will go by where nothing good is sparking, and then within a span of two days, I come up with three riffs that are going to be on the record. It’s weird how it works! I don’t believe in playing every day; sometimes, you can get into a rut. I’m all about giving your fingers and your guitar space from one another to do something completely different, whether that is reading a book, going for a walk, or playing a video game. Coming up with songs in the creative process is so fragile.

Based on your songs, you strike me as the type of person who likes to keep moving and keeping busy. I have to imagine being confined to home was challenging for a touring artist such as yourself.

Yes and no! When I’m on tour, I’m really stationary. I don’t leave the club once I walk into it until the night is over. I don’t leave my hotel room on days off unless to get food. Being in isolation is fine for me. I can deal with it. Being at home was fine too. We’ve been touring for 26 years, and I’m sick of touring, but I love playing shows. The idea of not touring was great, but it came with a stipulation that the world is in complete chaos, and that wasn’t good. It made staying home harder as I didn’t know if I had a job. I didn’t know what I was going to do or how to make money. There was all this anxiety of staying home. I’m not one of those guys who needs to go-go-go; I go in a different way; I have a podcast and write for various magazines. Everything came to a standstill with the pandemic. I stopped doing the podcast; for now, I don’t write that much; I’m just waiting for this crap to be over!

Did you take on any new hobbies to replace those things you aren’t doing?

Yeah, ah…No! [Laughing] What I did do was sold a lot of my record collection, selling over 250 records.

What do you have in store for fans for the two live stream events at the end of this month? Will you be performing Power Trio in its entirety?

Is it a bit of a challenge finding the right balance of old and new material to keep everyone happy?

No, not really. Having been touring so long, and even though we haven’t played in a year and a half, it’s just like getting back on the horse. It is getting to the point we are doing a show every two and half weeks and slowly getting back into the rhythm of things. If this new variant doesn’t knock us off our tracks, hopefully, by 2022, we will be at some semblance of normal again. I’m hoping.

You did your first live shows in July; knowing that you are outspoken about the importance of getting vaccinated and wearing a mask, where all the people in the audience masked?

They were not masked, so that was a little interesting. I have conflicting views about that. It was nice to play again; at the same time, it was disconcerting that people weren’t masked. I’m glad we are able to play, and our band is fully vaccinated. At the first show, we played; no one was wearing a mask, but it wasn’t our show, and it was in kind of outdoor in a tent. It wasn’t a club; I’m very careful about the pandemic; I wear two masks or a face shield.

With so many bands canceling shows, what is your opinion of the concert season this year?

I really don’t know. It’s different in Canada; it is the number one country with the most vaccinations. It’s not a contest as we all have to be vaccinated for it to go away. If we can show people all the cool things that can happen again, then maybe things will turn around in the States. I’m glad to hear that Lollapalooza in Chicago wasn’t a super spreader event. I hope that doesn’t give people the message that we don’t need to get their second dose. We don’t have any contingency plan so just hoping everyone follows the guidelines. The reason for doing this album was a contingency plan. If this thing goes away, we have to be ready to go to normal the very next day. We have tours booked, maybe it will happen, maybe it won’t, but it does, we will be ready to start working again rather than going, “Things are okay? I wished we booked a tour a month ago!” We just have to keep booking tours, and f they get canceled, I think people will understand why. We have shows on the books domestic shows in Canada this year, but we announced our European 2022 tour between April to June for festivals.