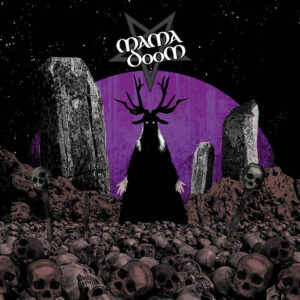 I’ve been listening to Mama Doom’s full length debut ASH BONE SKIN N STONE for a hot minute now, and I’m still not quite sure I’ve figured it out. At time it’s sultry and seductive, full of buoyant basslines (that assume full guitar duties) that are more up-tempo and remarkably catchy than anything you’d anticipate on hearing from a band with a pentagram logo and some sort of horned creature adorning the cover. And at other times the lyrical fodder and not-at-all subtle innuendo pull you out of the record entirely and even force the occasional eye roll. But that hasn’t stopped me from spinning the album almost daily, because a catchy tune is a catchy tune.

Taking cues from other occult minded acts like Blood Ceremony and Coven, Mama Doom weaves a groovy tapestry of synth heavy rhythms and fat riffs that are anchored by D. Lolli’s swooning vocals. The resulting 8 tracks are concise nuggets that would almost be commercially viable were it not for the affirmations of black masses and dead gods. “Oh, Lucifer” is unquestionably the standout cut of the album and is probably the best all around representation of what Mama Doom is about, though the doo wop swing of “Indigo” and the defiantly empowered “Vodka” demonstrate that this Mama is indeed versatile.

But then there’s “Werewolf” with its lycanthropic sexualization and “Cherry” which features such prose as “I’m gonna pop it, poppity pop it.” I’m hoping these moments are intended to be received as cheeky as they are, but either way they carry a different weight than the stronger tunes on ASH BONE SKIN N STONE. But dammit if I still haven’t caught myself singing “I’m a werrrwullffff” and “poppity pop it”, because a catchy tune is still a catchy tune.

Digging into their earlier EPs and singles, ASH BONE SKIN N STONE would appear to be a line in the sand with their past and present, opting to broaden their sound and take some more creative chances. And personal critiques aside, I’ve found myself enjoying the hell out of this album. Mama Doom offers a fresh spin on familiar musical flavors and does it without apology, check it out and judge for yourself.