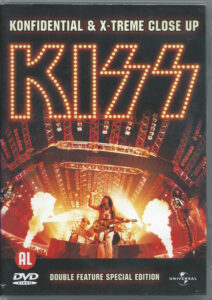 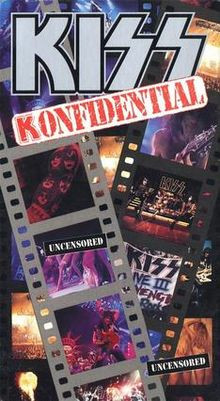 Inspired by the recent Kiss documentary called Kisstory, (aired on A&E’s Biography series) I decided to go back and review a couple of old Kiss home videos; KONFIDENTIAL and X-TREME CLOSE-UP.  This ties in nicely with the re-launch of the band’s farewell tour ‘The End Of The Road’.   Feel free to read my review of those other two shows as well. This release is already three decades old so I’m not going to spend a ton of time reviewing it but it does fit with my mandate to try to review every Hard Rock/Metal DVD ever!

Kiss has always had it’s up’s and downs and the early 90’s saw the band rising a high with the release of REVENGE.  Never shy to capitalize on an opportunity that album cycle saw a home video (KONFIDENTIAL), a live album (ALIVE III) and a follow up home video in 1993 called X-TREME CLOSE UP. There was quite a little burst of activity.

Originally only released on VHS this was re-issued (along with X-TREME CLOSE UP) as a stand-alone DVD in 2004 with alternate artwork.  Finally after a decade these home video were available on DVD for a very reasonable price.

KONFIDENTIAL was essentially a live tour video for the REVENGE album and the ALIVE III album.  It is a companion piece.  X-TREME CLOSE-UP was a documentary this is basically the live concert and a few extras thrown in.  The concert was filmed in Michigan, Indiana and Ohio and was cobbled together.    It is sort of weird, the clips are the concert but right in the middle there are four vintage clips from the 70’s.  Why would they interrupt the flow of the concert like that?  Those clips would have been the perfect ‘bonus’ material.  It was neat to see the giant Statue of Liberty stage set and the band really was firing on all cylinders.  The passing of Eric Carr was still fresh but Eric Singer was just killing it as well and got some good face time in the interviews. There is a bit of  t’n’a  as the band had brought some strippers on the road and we get to see a bit of what goes on backstage.   I always liked the set-list from that tour, one of their heaviest and you can’t go wrong with ‘God Gave Rock And Roll To You’.

Some fans contend that REVENGE was the last truly excellent studio Kiss album.  Considering that there have only been four new studio, Kiss albums in the past 30 years (1992-2022) I might be inclined to agree.  It is great to finally have the REVENGE/ALIVE III tour cycle in my collection.