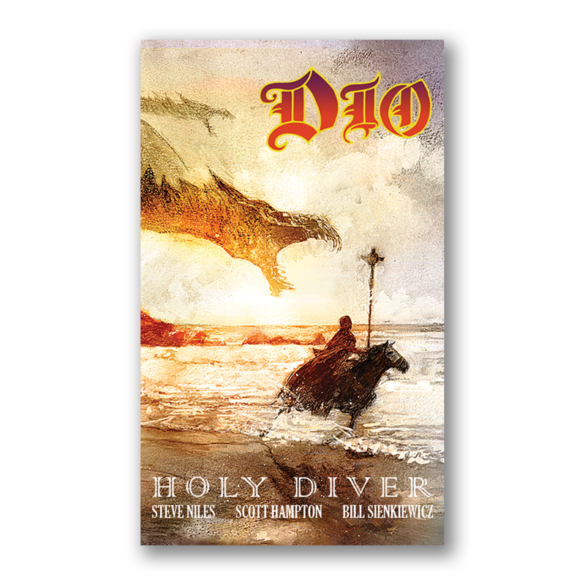 I don’t think it is a coincidence that the very first officially endorsed Dio comic/graphic novel was released to coincide with the new Dio autobiography, RAINBOW IN TBE DARK!

The good people at Z2 are really building  a good name for themselves with a series of Metal themed comics. HOLY DIVER is an adaptation of one of Dio’s most successful and popular solo albums.

This  130+page graphic novel is the brainchild of Steve Niles (story) and Scott Hampton (art).   I don’t follow the comic industry anymore (except Metal Comic crossovers) but their credentials include such projects as 30 Days Of Night and The Upturned Stone.  In terms of production and presentation it is a nice book, full colour, decent paper and it has a number of bonus sketches and the like.   There are many variations and special editions for your to collect.   I’m just reviewing the back trade-paperback version.

In many occasions in the past critics have challenged Dio for the semi-controversial cover art of his 1983 album, HOLY DIVER. In case you don’t know it depicts a ‘monster’ (Murray his mascot) drowning a catholic priest.  On many occasions in the media Dio has challenged those perceptions and suggested that not all is as it seems and in fact that the ‘monster’ may in fact be the priest and the demon-dude is actually the good guy.  This is important because the plot of whole book hinges on this twist. I won’t go into anymore detail as to avoid ruining it for you, but the storyline is intense, story of medieval times where magic still existed.

The writing is bold with many lyrical references from the album.  The art is somewhat subdued with darker tones and shades.  It is not your average, big and bright comic hero art, this matches the dark mood of the story very nicely. It certainly has adult themes and images, there is a bit of nudity but it is not graphic or gratuitous.

I’ve read quite a few Metal themed graphic novels now and this is one of the better ones in my library. Dio fans can rest assured that this graphic novel does justice to the memory of Dio and his iconic album.