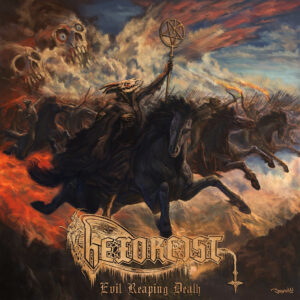 Miami, Forida’s Hexorcist makes no bones about it, they are old school Florida death metal. Their debut full length, EVIL REAPING DEATH, was just released 30 years after the explosion of bands from that very state that created the genre. Founded in 2019, the band has decided to add their own twist by making their identities rather vague with each member calling themselves Hexorcist I-IV adding an air of mystery around the band. But most importantly, it’s what they bring to the table musically that caught my ear. This is not just old school death metal in name, these guys back it up!

The opener has a brief intro before the blasts kick in with some monstrous riffs and shredding solos. “Exulting the Adversary” hits you right in the throat from the start. The vocals remind me of David Vincent from the early days of Morbid Angel. What strikes me here is the riffs. The opener is an absolute riffs fest. There is nothing modern about this album. This will actually take you back to the early 90s. “Sentry at the Seven Gates” immediately follows and just pummels you with fast, ferocious riffing. The song is less than three minutes in length, but they waste no time with the aural assault. Rounding out the opening trifecta is my favorite on the album, “Unblessing the Reverent.” This one slays from beginning to end. There is even an epic part in the middle of the song that sounds almost like a movie soundtrack but with the riffs just coming. With a trio like this, the rest of the album is sure to continue the pummeling.

And I was not wrong. Usually I can get a gauge of an album by the first three songs. That is not always accurate but in most cases it is. In this case it is most definitely accurate because the remainder of this album is more of the same. Songs like “Denouncing the Immaculate,” with a really cool eerie organ intro the song is another crusher. The title track is another example of how this band does old school correctly. Some of the riffs blur the lines between death and thrash metal as did the early bands giving this an air of authenticity…and deservedly so. The solos are blistering as they should be on any old school death metal album adding to the atmosphere they are truing to create. The closer is the blistering cover of Hexorcist IV’s previous band Devastator and is a more blackened thrash song but actually fits the album quite well.

So it seems that south Florida is not quite finished cultivating killer death metal bands. Hexorcist has released one killer debut and one of the finest death metal albums I’ve heard in a while. Hearing death metal with that touch of thrash and even some early first wave riffing in there reminds me of those days when death metal was brand new. This debut is already getting some press and for good reason. This is how death metal is done. You really should have this album. You’re welcome! 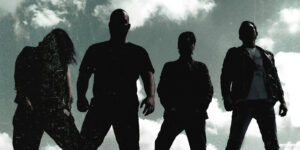