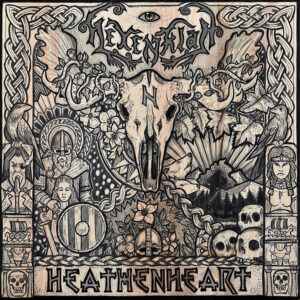 Hexenklad deliver Northern European inspired black/folk/pagan metal by way of North America. Yet the Ontarians do with an authentic and inspired vigor and aesthetic that recalls Ensiferum, Moonsorrow and vintage Amon Amarth, with an element of Korpiklaani’s cheese in their cloaks, pelts, animal bones and mead horn accoutrements.

The heathen horde get their second album off to a rousing start with the bracing but anthemic and rather catchy title track and “Cold Beauty of Winter” with its black metal fits, dramatic mood swings and haunting chorus. “Huginn and Muninn,” about the ravens of Odin, offers up its folk metal jauntiness at black metal velocity – the similarly minded “The Raven Returns to the Knoll” contrasts these elements instead of mashing them together – while the chunkier “Dark Moon in Capricorn” hints at the epic majesty of Insomnium. The surging “A Thousand Paths” harks back to the title track with its anthemic swells and monumental choruses that are graced by some of the album’s more bombastic orchestrations.

But, sadly, the band can’t – or at least don’t – hang on to this considerable momentum, and make a rather drastic change of direction over much of the back half of the album. The folk balladry of “Beware the Outstretched Hand” may have worked fine as a short segue, but at five-plus minutes it wears out its welcome and comes off sounding kinda hokey. “Olde Gods Awaken” gets things back on a black metal course, albeit briefly. The instrumental “A Forest Of Dead Trees” is a mixed bag jam of Sabbath-like grooves and ethereal acoustic guitars that just doesn’t seem to belong.

The seven-minute “Upon the Wings of Valkyries” is the album’s epic centerpiece, but is something of a Franken-tune with various sections stitched together into a somewhat awkward whole. The dark acoustic opening segment is effectively somber, with Timothy Voldemars Johnston’s Peter Steele-like baritone, and the black metal sprint that erupts from it makes for a genuinely startling contrast, but the song keeps changing shape the rest of the way and loses direction. And following “A Moment Of Silence” – which is just that – “We Raise A Horn” concludes things with a Wardruna-like folksy fizzle, a la “Outstretched Hand,” instead of going for the gusto, as it were, a la Amon Amarth.

So Heathenheart is a bit of a frustrating effort. When it’s good – which is the bulk of the time – it’s very good, especially over the front half. But the aimless homestretch, with its curious stylistic turns, leaves a weird taste when all is said and done and definitely steals some of the album’s thunder.

Track List
1. Heathenheart
2. Cold Beauty of Winter
3. Huginn and Muninn
4. Dark Moon in Capricorn
5. Rootbound
6. The Raven Returns to the Knoll
7. A Thousand Paths to Wisdom
8. Beware the Outstretched Hand
9. Olde Gods Awaken
10. A Forest of Dead Trees
11. Upon the Wings of Valkyries
12. A Moment of Silence
13. We Raise a Horn