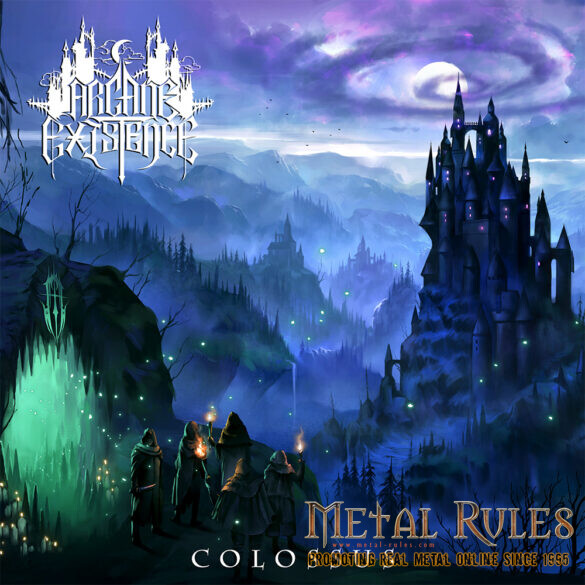 Starting out as Kiera Pietrangelo’s solo project in 2016, before expanding into a full band the following year, Arcane Existence are a California-based symphonic black/death metal quintet. Their name describes the band’s aesthetic and lyrics that explore themes such as fantasy, magic and human experience. Following up their 2017 debut The Dark Curse, Arcane Existence have returned to enchant audiences with sophomore album Colossus, which is set to be unleashed on the 20th of August.

“Colossus is a journey through a mystical land following a cult’s quest towards reaching the Colossus castle. Each song paints a different phase of the cultists’ internal conflicts of breaking through their own mind’s illusions. The lore of Colossus is told through hauntingly angelic singing and inhumanly dynamic gutturals. Melodic piano and dramatic layers of orchestrations trace the lingering and thematic guitars that create the magical sound space. The foundation of Colossus is driven by the ritualistically thunderous drums and rhythmic dark bass. Colossus is an intense cultivation of Arcane Existence’s sound and represents the collaborative effort as a full band for the first time.”

The songwriting in album opener “Mystic” does a superb job of storytelling, as far as the music is concerned. Jade Ordonez’s deeper vocals seem to overshadow Becca McCabe’s cleans slightly, but the instrumentation does enough to carry the essence of song.

“Sovereign Blood” sees the rhythm section (Pietrangelo and Blandford) There are some operatic vocals that are similar to those found on Nightwish’s “Ghost Love Score” that are a little distracting feel at bit gimmicky in comparison to the other elements.

“Transmutation” seems to work better than the previous two songs, as the clean singing is used towards the end, rather than intermittently with the death/black vocals. This third track also plays host to some amazing guitar moments from Zinnanti and Pietrangelo, furthering its status as an early stand-out track. Seeming to take notes from its predecessor, “Formation” saves the angelic singing until last.

The growled vocals dominate “Conclave,” and provide the most memorable delivery of lyrics during track five. The symphonic break here is particularly effective, almost creating as much variation as the vocals provide.

“Scroll Of Augury” mixes Jade’s abrasive growls under abrasive growls, with the symphonic instruments and Becca’s light and airy voice helping to expand on the dark narrative of the fairytale concept.

One of the more vocally exciting moments in Colossus can be heard on “The Altar”. Quite adventurous in nature, it is plain to see why this track was chosen as one of the single ahead of the album release (“Sovereign Blood” and “Conclave” being the others).

For a track spanning a little over two minutes, “Enchantment” holds a lot of drama and suspense. Like track four, Ordonez and McCabe’s voice counter each other effectively, which seems to be the case with many of the shorter tracks.

The riffs featured on “Castle On The Hill” are superb, even when the lyrics are growled over them. An especially fantastic performance from the guitarists on this one, including guest musician Bobby Caroll who is also present on “Sovereign Blood”.

One of the most instantly infectious offerings on this release, “Conducting the Scourge” enchants with its charming melodies. Interestingly enough, both the screams and the singing reinforce the melodic nature of this song.

A triumphant melodic solo announces the arrival of title track “Colossus,” which proceeds to balance heaviness with heavenly sounds. It truly is a colossal song with soaring guitars, drawing its strength from its harsher side, with enough twists and turns to keep you engaged from beginning to end.

“Beneath Withered Stone” takes a very symphonic approach from its inception, evolving into a more of a metal track as it progresses. The vocals only cover about half of track twelve, and are one of the most balanced in the last half of the album.

The softest chapter of Colossus, “A Light Between Realms” is saved until last. It is a beautiful instrumental composition, that juxtaposes much of the other dozen songs.

The sung and unclean vocals both work in their own right, but sometimes feel a little too separate on this release (especially during track one and two). Perhaps if the clean singing would have been less frequent, or each individual vocal style could be heard on its own in some instances (i.e. entire songs with just gutturals or melodic singing), the vocals would be more impactful overall. As the album progresses, the two vocalists’ voice do seem to come together more naturally. Overall, Colossus’ saving graces are its instrumental side, which makes the best use of combining the softer and heavier musical approaches. Hats off to Arcane Existence for having a fairly unique sound.

If bands like Carach Angren, Cradle of Filth, Dark Fortress, Delain, Dimmu Borgir, Epica and Fleshgod Apocalypse have you under their spell, Arcane Existence’s Colossus just might captivate you. 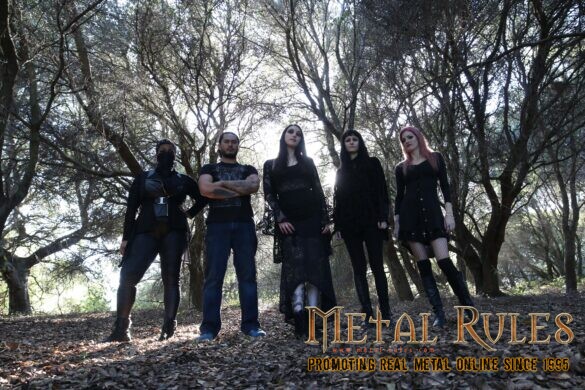