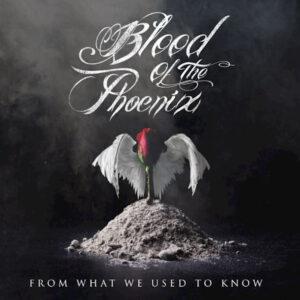 Metal Rules is pleased to premiere to you the album EP stream for Blood Of The Phoenix’s “From What We Used To Know”. We would also like to offer our condolences to the band, fans, friends and family of guitarist Bradley Hart who suddenly passed away on the eve of the album’s release. Rest in Power Bradley.

A few words on the album and the release from the band:

Birthed from the late Bradley Eligius Hart, and his friend and ally in recovery, Nolan Moore. Blood of the Phoenix instinctually vibed together and easily created a solid foundation for the EP between the two and a former guitarist (Matt). Jess and Jade joined and wrote their parts over top, adapting portions of the instrumental to suit the new additions. Eventually, we got into Jade’s studio and began tracking what will now be the only recordings featuring our fundamental member, Bradley. We wrote the EP about struggles through life. Losing trust in the world around you and learning how to come through the other side and shed your grudges. We (BOTP), are never going to forget the passion with which he pushed forward. This release is for him and despite how much we’re hurting, the world needs to know he was here. RIP brother.

Indie metal band Blood of the Phoenix rises to the top of the ranks with their shocking dynamic vocal style, powerful storytelling and robust instrumentation. Drawing inspiration from early 2000s Metalcore, the band has created their niche pocket in the hardcore genre. This five-piece ensemble consists of Jess Escobar as lead vocalist, Bradley Hart & Manny Marwaha on guitar, Jade Weekes on bass, and Nolan Moore on the drums. At its inception, Nolan and Bradley met in recovery on the downtown Vancouver eastside, struggling with personal addictions. During this process, they created a bond that would come full circle to the creation of Blood of the Phoenix. The name was directly inspired by each of the bandmate’s life experiences where they rose from the ashes and reinvented themselves. Their upcoming debut EP “From What We Used To Know” explores the darkness and healing within judgment, rejection, loss and addiction. Throughout the pandemic, the band produced, recorded and wrote everything off of their new EP independently. They have also been featured in Star Pow-R’s “A Very Metal Christmas”, LockFest 2020, and Fallen Fest. Blood of the Phoenix is not your average metal band, they are a new age genre with a massive future ahead of them.

“From What We Used To Know” will be released digitally on all major platforms July 2nd and can be pre-ordered here:

Blood Of The Phoenix is:

Lady of the plagued

Connect with Blood Of The Phoenix: